How do I create an interaction in game?

I’m having trouble creating an interatable fire in UE4.
Here is my blueprint code below:

As you see it is very simple but for some reason does not work
I want to change the flipbook from unlit logs to lighting lights but it will not change in game.
I’m also having a secondary issue where in the preview of the game the fire disappears after approx 3 seconds.
Any help will be very much appreciated 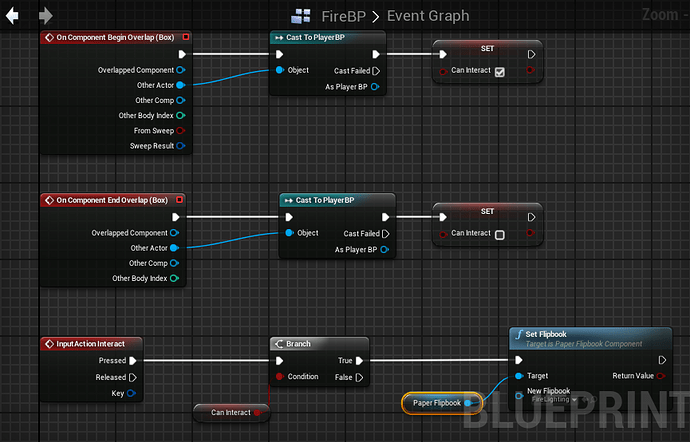 Do you know if the SetFlipbook function ever gets called?

On the bottom right it is called?

Yes, try using the Print to Screen node, just before you call the SetFlipbook node, in order to check that the node is being called, that might just be one of the problems.

I’ll try that, thanks

Then it’s probably a logic issue, check if the overlaps are being fired (using the same technique)

Ok, then put a print string just after the Interact event, and see if that fires.

Also, are you actually pressing Interact while inside the collision box?