How do I create a split-screen game? 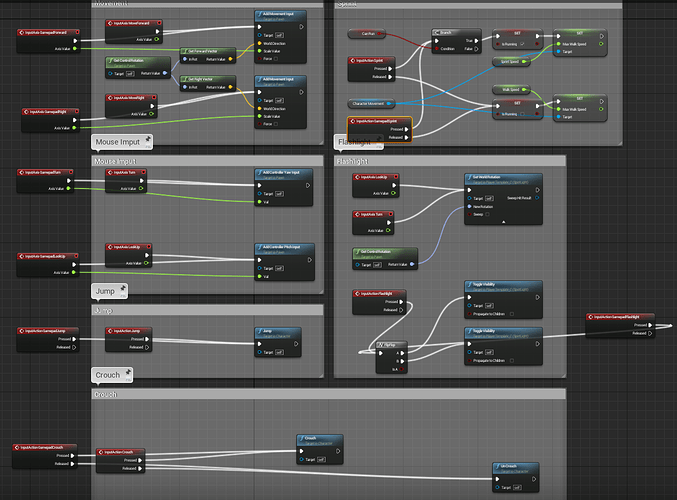 Any help would be appreciated! Thanks a lot guys!

the easy way to do it, is to buy a second wired xbox controller. it would be nice if Epic would add the option to split keyboard and the first controller as separate LocalPlayers with different controller IDs in the same window.

the next easiest way to do it, (although it wont give you splitscreen, it will instead give you 2 separate windows), you can go to your EditorPreferences > Play and set the number of players to 2 and check Route1stGamepadToSecondClient: 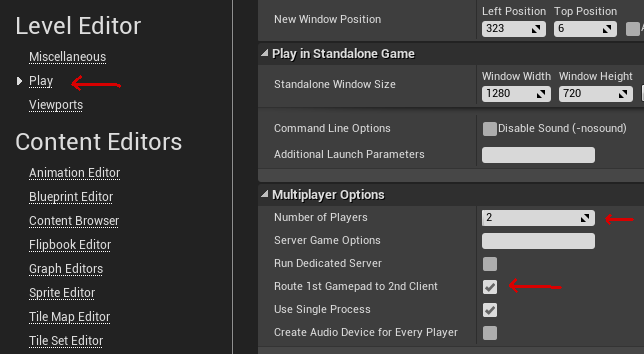 the hard way to do it, is to route all of your input for both players through the same playerController, and using the gamepad to control the pawn of a separate PlayerController. you would have to set up input actions and input axis events that are just for the keyboard, and separate events just for the controller.

then you give your playerController a SecondPawn reference variable. you check if this reference is valid, and if it is, your controller input events tell this SecondPawn’s movementComponent what to do, instead of telling its possessed pawn what to do. if the reference is invalid, you might want the gamepad to do the same things as the keyboard.

then you will have a setup where each gamepad controls the pawn of a different playercontroller than its owner.

I’m trying to control 2 pawns with each thumbstick on my 360 gamepad. I’ve managed to setup the inputs correctly when the pawns are in the scene by themselves. However, when I spawn the first one via the player spawn and spawn the other pawn through...

and the hardest way to do it, is to hack into the C++ and figure out where the first controller is getting its controller ID from, and changing that code. i haven’t been able to figure out how that works yet. at some point, your gameViewportClient recieves an inputAction or InputAxis, and it knows whether its a gamepad or a keyboard input, so you can probably make a custom GameViewportClient that overrides inputAxis and InputAction, and increment the controllerID if its comming from a gamepad.

I attempted doing the level editor method and it worked. However, physics objects in the two windows would move independently, rather than on both windows. As of now, I have simply connected a second controller and it is working perfectly! Thank you so much for the help!

Thanks a lot bud! It worked perfectly!

For local multiplayer, Unreal cannot do split controllers. Because first keyb/mouse/gamepad/joystick always assign to Player 0. And all other game controllers assign to next player accordingly. Other words, you need to connect 2 or more gamepads.

As this question is raising here. I have another question:

Is it maybe possible to connect two keyboards and use 2 keyboards as controllers instead of 2 gamepads?

Did anybody try this?

No. It is work only for game controllers.

Would it be possible to create a dummy controller to take the player 0 slot? One that doesn’t actually connect to a real controller, but just takes up space?

can i have the link (download) for the blueprints?
I’m making a split screen game but idk how

For anyone still unable to get a local splitscreen system working, I have created a short tutorial to get you going on your multiplayer game.

NOTE**** This is a blueprint system for creating players driven by separate character blueprints. I used this to help differentiate what each of my players could do in my game. If you are looking for a system where all players are driven by a single character blueprint, simply follow this tutorial until you reach the “Create blueprint characters for each player” screenshot. However, I do believe that this is the most effective method. Let’s get started.

-First you will need to create a blueprint enumeration. This will help to control the amount of players in your game. This is optional, but I recommend it. 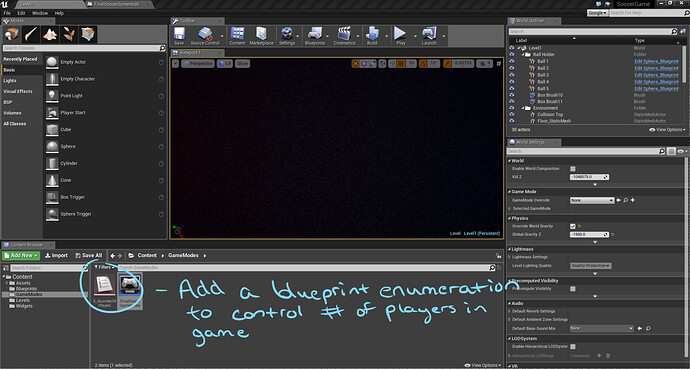 -Open your enumeration and create an input for 2 players, 3 players, and 4 players. 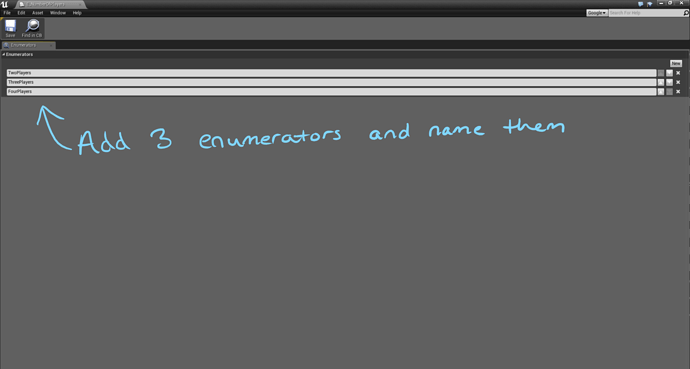 -Next we will set up the gamemode to create the players. First, open your gamemode event graph and create a variable that will control the number of players in your game. Change your variable type to your enumeration that you created previously. This should be “E ____________ - Whatever you named your enumeration”. Compile and you should now be able to switch between two, three, and four players in your variable. 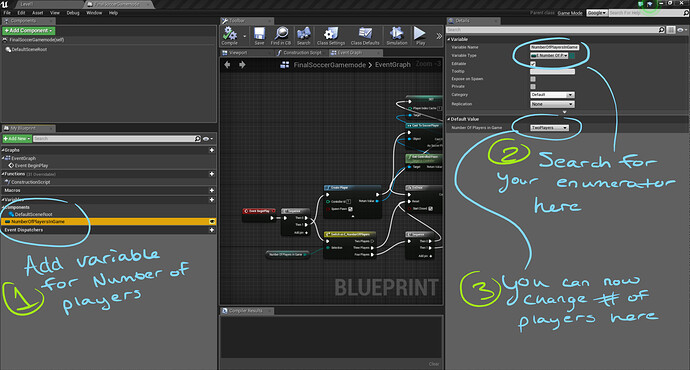 -Now we need to set up the gamemode blueprint to create the players. Simply use a setup like this one to create a number of players based on the variable that you just created. 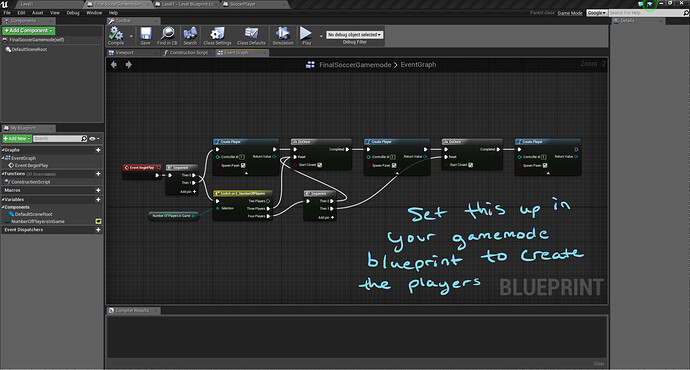 -Now, create a blueprint character for each player that will be playing your game. These can be duplicates of each other or they can have very different behavior, this is up to you. In this case, I only have 2 players so I created only 2 blueprint characters. 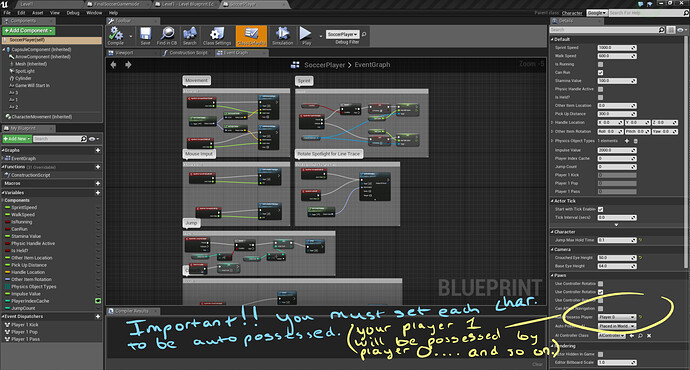 That’s it! Simply drop each player character into your game! As I stated previously, you can now customize each player individually and reference each player separately in the level blueprint. This is very helpful and will better allow your game to distinguish which players are performing which action!

I really hope this helps somebody get started with local multiplayer! This system, simple as it was, took me over a year to figure out, as I am still relatively new to the software. Let me know if you guys are having any problems with the system! Also, please let me know if something I have posted here is incorrect, seeing as I have only used this setup once, but it worked flawlessly. Thanks so much!

That sounds like it would work- have you had any luck with the dummy controller?

great thanks.
But the second character does not move by pressing the key. help me

Sorry about the wait! I was not aware that I had a response. You can not use the keyboard for multiple players with this setup unless you make each player have different input keys. This system works perfectly for multiple gamepad support. So keep plugging in gamepads to control the players that you add. I believe the keyboard will only control player 1.

Hi i’m still having an issue where three screens are made although I only have two characters. I’ve also got a respawn system that only works to respawn player 1 but onto one of the other two screens and the other players don’t respawn. Finally I have a HUD created that is only appearing on the top screen.

I know it’s been a while but did you ever figure this out?