How can I use Unreal engine to make Short Films?

I recently found that there are People who have created 3d short films with Game Engines. I am a character animator, and I saw that Game Engines Contain Real Time Rendering so I thought that it might be a better and less time consuming way to create a Short film. But I don’t know how to use it and what type of Character Rigs are accepted In UE . Can you please Describe How can I make this thing work. Thank you.

I couldn’t advise using a game engine to make short films, since that isn’t really what it is designed for.

It is possible to use the “Level Sequencer” feature to support cinematic moments inside the game engine, but there is nothing inside UE4 that will allow you to do fundamental things, such as Keyframing bones and character movement.

If you are looking to create short films, I’d recommend using a package such as Blender or Maya. This will actually allow you to keyframe character movement, and plot animation. You even gain access to things like simulation and higher quality rendering. It’s also much, much quicker to perform basic animation nessesary tasks.

It is then possible to export your animation into UE4, and use the “Level Sequencer” to plot Camera movement, but this is honestly just a much more drawn out, unessesary, and time consuming work flow.

UE4 will support many or even most rigs you provide it, but you wont have any control over those rigs once they are in engine, as they will have to include all of the animations beforehand, which you will have to do in a Program like Blender/Maya anyway.

Of course, this also boils down to the kind of animations you are looking to make, and the level of Knowledge you have of general use of Unreal Engine. But also keep in mind, real-time rendering is hugely limited compared to the results of pre-rendered animation, and is generally more of a pre-vis tool in animation. But you should also note that Blender now has its own Realtime rendering engine called “Evee”, which makes using UE4 just for realtime rending fairly redudant.

In Short:
You may as well use Blender with “Evee” for animating, since that is quick, easy to use, and just as high quality as Unreal, and you could even switch to Pre-Rendered if you wanted even higher quality results. (It’s also what you have to use to create your animations to start with anyway)
Once your animation is finished, you can still then import it into UE4, in case you wanted to use it inside a game or something, but I ultimately wouldn’t recommend it. Since it just makes everything more complicated from an animation standpoint.

Unfortunately you can’t use character controllers created in, for example, Max or Maya, however, there is a plugin on the marketplace called Allright Rig which allows you to create controllers in the editor. Then you can easily animate the same way you would in Max or Maya without leaving the editor.

Unless you’re going for ultra realistic rendering UE4 has all the features you need including raytracing. And you can crank all the settings to max for the final render because you can export at say 30 FPS regardless of your in editor framerate.

Also since it’s a game engine you can create event based scenes and reactions and making adjustments is a lot quicker. You can have basic AI movement for your background characters without having to animate the same goes for vehicles.

Many companies are moving to realtime rendering because it is a lot faster and more flexible.

The other answers are correct in that the tools and workflows of a realtime engine like Unreal are very different compared to traditional tools such as Blender or Maya. However, that doesn’t mean that it’s not possible to make films/animations using Unreal or that it’s only suitable for previz work. Depending on what you’re trying to do, it’s possible to create final pixel quality content while potentially saving considerable time, cost, and effort.You can check out these two example [1][1], [2][2] and find many more featured [here][3].

Also, note that Sequencer, while not as full-featured as a dedicated animation package, is highly flexible in the context of the engine and allows keyframing of scene actors and their properties. You can read more about this [here][4].

Lastly, there’s a sample project called Sequencer which you can download from the Epic launcher. It provides you with a complete cinematic scene including its sequencer assets. You can start by looking at this to get a feel for what sequencer can or can’t do and whether or not it would be suitable for your project.

Here’s where you can find it: 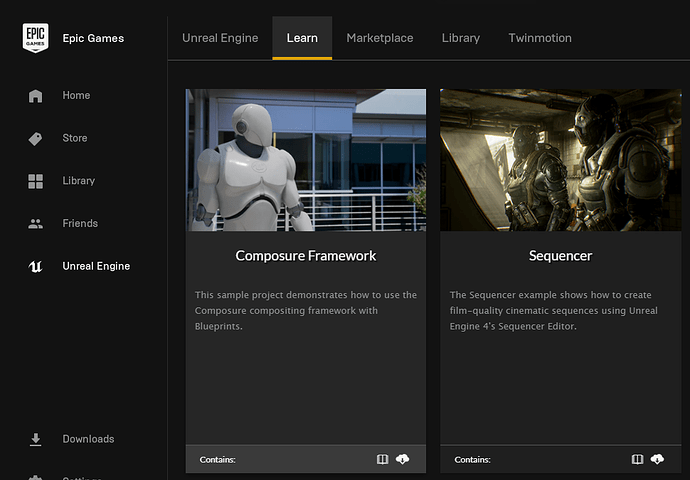