How can i trigger an event dispatcher/custom event with a Widget Blueprint?

Hi guys,
i just started working on a TDW game, and created a Blueprint for the Base, where the player should be able to spawn turrets. This Blueprint contains only a Static Mesh and a Trigger Volume, but no script.
In the Level Blueprint i add the UMG to the Viewport and remove it when i leave the Area around the Base. The UMG is nothing more than a button. How can i fire my Custom Event or an Event Dispatcher from the Level Blueprint or an actor Blueprint? Both need a target, but i have no clue waht it could be? 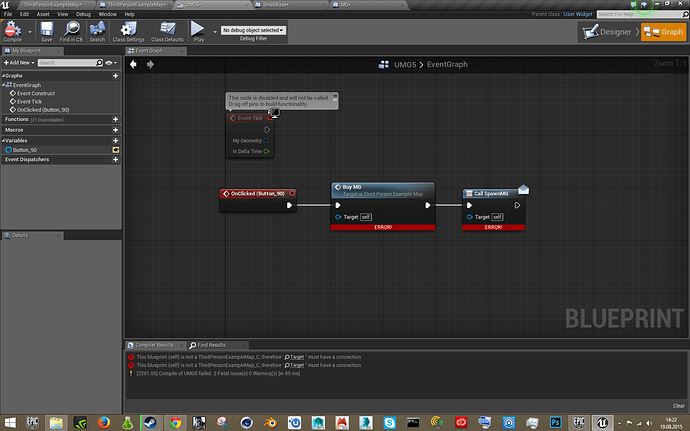 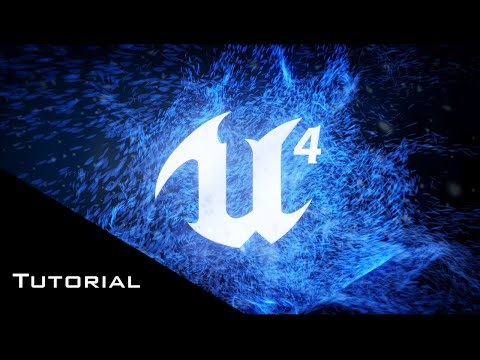 Man, where were you when I had my problems a few days ago;) But with the help of this awesome community, I was able to figure it out and learn some stuff (you don’t have to use just Event Dispatchers)! By creating an Object Ref of the Actor BP you want, you can just directly cast into it. This is a lot faster imho. Now, is it more/same efficiency…that I don’t know. 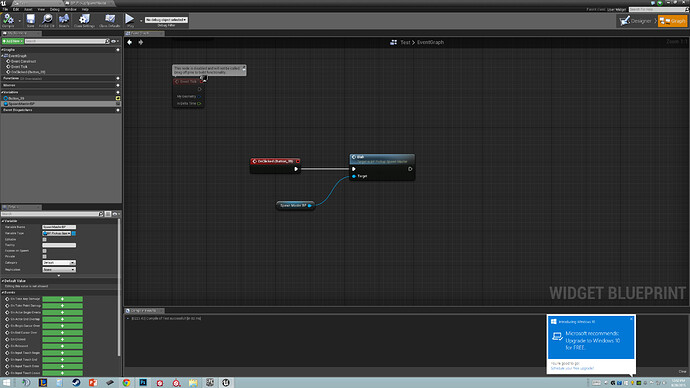 I won’t upgrade to Windows10 for a few months Microsoft! Not until everything is 100000% Win10 ready.

Using event dispatchers inside the Widget can help you to move the execution outside of the Widget itself without needing to hold a reference. Inside another BP as long as you have the Widget you can receive the Event Dispatchers execution at any time over any number of functions by subscribing to it where you need it.

As you pointed out it is just one way of handling communication between Widgets and Blueprints.

Hi, are you talking about Animation BP as well? Because I can’t communicate between AnimBP and Widget using Event Dispatchers. Is it possible e.g. to receive value from Widget slider in AnimBP Event Graph?

Hi @DevilsD, this is almost what i need, but how to do the same when you have create the widget in other bp not in the one you need to interact?