How can I switch from a Splash Widget to Main Menu Widget?

I have a Main Menu and then I made a Loading Splash Screen to show for a few seconds and then have the game switch over to the Main Menu widget.

I thought I had it correct after watching like 10 different youtube videos but for some reason the Loading Splash Screen widget I created won’t remove and the Main Menu widget never appears.

If I switch it around then the Main Menu works but does the same thing and I have no idea why in the world it’s not working or how to give proper authority. I even tried setting a variable for the widget to switch it over but still no luck.

Can someone advise me on a solution to this problem? It makes no sense to me after several attempts so I think I am probably missing something somewhere. 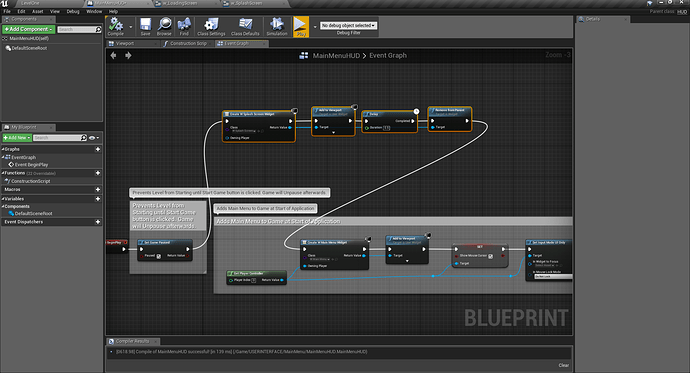 I found the cause of the issue so now I am stuck trying to find a way to correct it, no luck yet.

You can set some actors to Tick While Paused, such as the PlayerController that handles input. I think Wifgets tick while paused by default but you can check on that too. They are not Actors though since they exist on your UI rather than in the world (unless they are actor Widget components)

Hmm, okay, I’ll give that a try, thanks for the advice.

Yep, that did the trick! Thanks so much!