How can I change the mouse cursor texture?

Is there away I could change the default mouse textures in the engine? I want to import my own and use them.

The Default Mouse Cursor texture is currently pulled from the Operating System. You can switch between a few different options in your Player Controller Defaults in the Mouse Interface section: 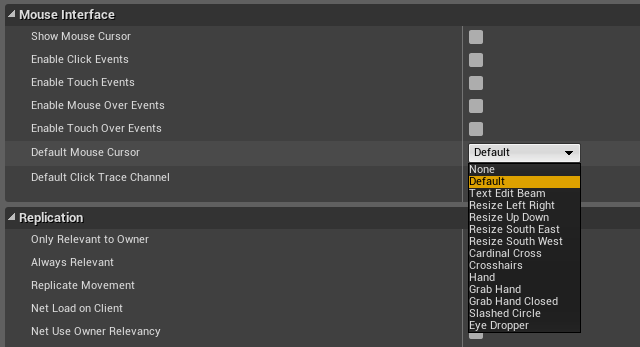 Those are limited options and dependent on the OS of the user. If you want to set up your own cursor, you’ll need to draw one on screen. There’s a pretty good tutorial here:

Hope that helps! Let me know if you need more help setting this up.

I used this way to change my cursor,but it will hide in the menu widget,how can i slove that problem? 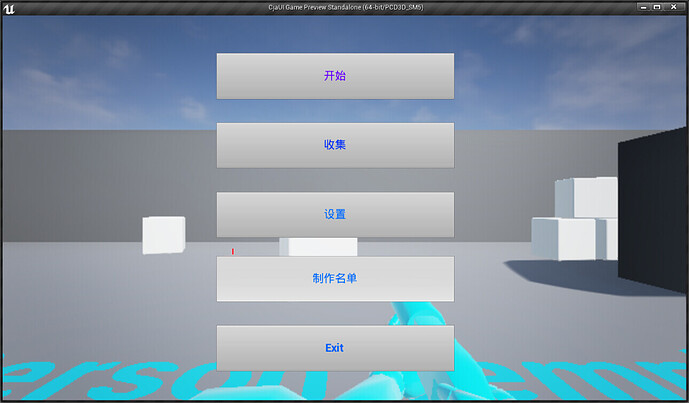 I don’t know if Epic changed something about this with UMG, but hiding or showing your Mouse Cursor is normaly done with this Node:

As an additional update, software cursor support should be coming in a future release, possibly 4.8.

You can go to Edit → Project Settings → User Interface (on the left) → Default Cursor and set it to a widget!

So all you have to do is make a User Widget BP, and put the cursor as an image all alone in there. You can also do more complicated stuff if you really want! Just remember most users want a quick, responsive interface that’s easy to see and understand.

Hope that helps some people!

I have done the same as told by you and its working fine on unreal engine but when i launch it on Samsung Gear VR custom cursor is not showing. . .I will really appreciate if you show me some way to get my hands on it.Thanks you

What version are you in? I currently have an issue in UE4 4.11 where the cursor isn’t properly showing up in Editor / Launch Game mode (but shows up fine in Release mode.)

I am using 4.12.1 cursor show on editor but when i launch it on Samsung Gear VR it show the default one with very small size. Thanks for the help

ok, good, but how to set up a cursor position and click withou a mouse hardware?

I know that this is old but the new way to do it is to create a widget and use the ''Set Mouse Cursor Widget". I use it in my “Player Controller” class.

He’s simply setting a reference to it (Return Value → Promote to Variable) so he can access it later. For example, if he needs to make the cursor do something, like animate, or hide, you can call the Cursor reference they set.