Im using 4.5 and there were improvements for hot reloading but maybe not for what im using it for, im not sure but it says FULL GAME C++ HOT RELOAD in release notes.
So after i do changes on my c++ code, like for example adding UPROPERTY to variables, adding functions (stuff that 4.5 is supposed to work with if im not mistaking), my variable in blueprint from my c++ class change its type to HOTRELOADED then my variable doesn’t work anymore, i can’t compile nor save it. Atfer i restart the editor all works very well. I hope you can help me, thx. 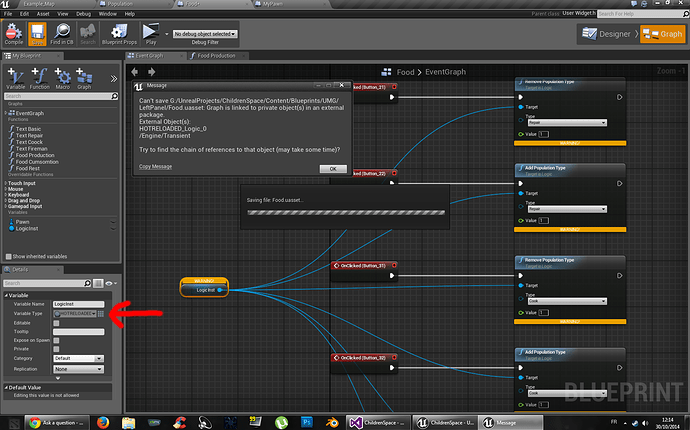 I guess the only answer I have now is save before you compile because you might not be able to save after you compile. Seems like a problem to me. Hopefully Epic will fix but I am not holding my breath on this one.

I think reload only really works if you change the .cpp files, not the .h files. As long as the interface is the same, you can tweak the implementation as much as you want and it still re-loads.

The worst part of it is that it’s basically a dead end: you can’t do anything until you close the editor and open it again. I’d already agree to go for “recompile all and lose something” but not “quit and reopen the whole thing” - this feels very…desperate.

I got used to it, it’s not perfect but it could be worst i guess. I hope they can work around having to close the editor or at least make the editor reopen exactly the same as you just closed it, coz right now the windows are not docked the same once reopened.

Epic has agreed this is a bug now here:

I recommend everyone vote for the issue so it might get raised to a higher prio!