I need some help with setting up a local multiplayer with split screen. I will try to explain my problem in the best way.

First of all, I don’t remember exactly all the changes I made in UTGame Classes, but I know I made many changes, even though my custom game types are extended from UTTeamGame. I changed many things like I removed kismet messages on screen, I removed the narrators voice “Red Team won the match”, I removed the taunt animations on end of the match, I removed the UTGame phrases like player killed player, and many other things. Also for the campaign game mode I changed the rules, like Goalscore in the DefaultGame.ini:

So on the campaign maps I end the match manually with kismet after the player completes all the mission objectives (everything done in kismet).

However, for the multiplayer custom game type I created, I made something different, I tried to keep it as close as standard UTTeamGame:

And here follows the Multiplayer configuration on DefaultGame.ini:

As you can see, I setup 5 points the Goal Score and the maximum lives of each player. So that means the first player to perform 5 kills wins the match.

Here is the basic kismet sequence I used to spawn player 2 (I want only 2 players) and Split the Screen: 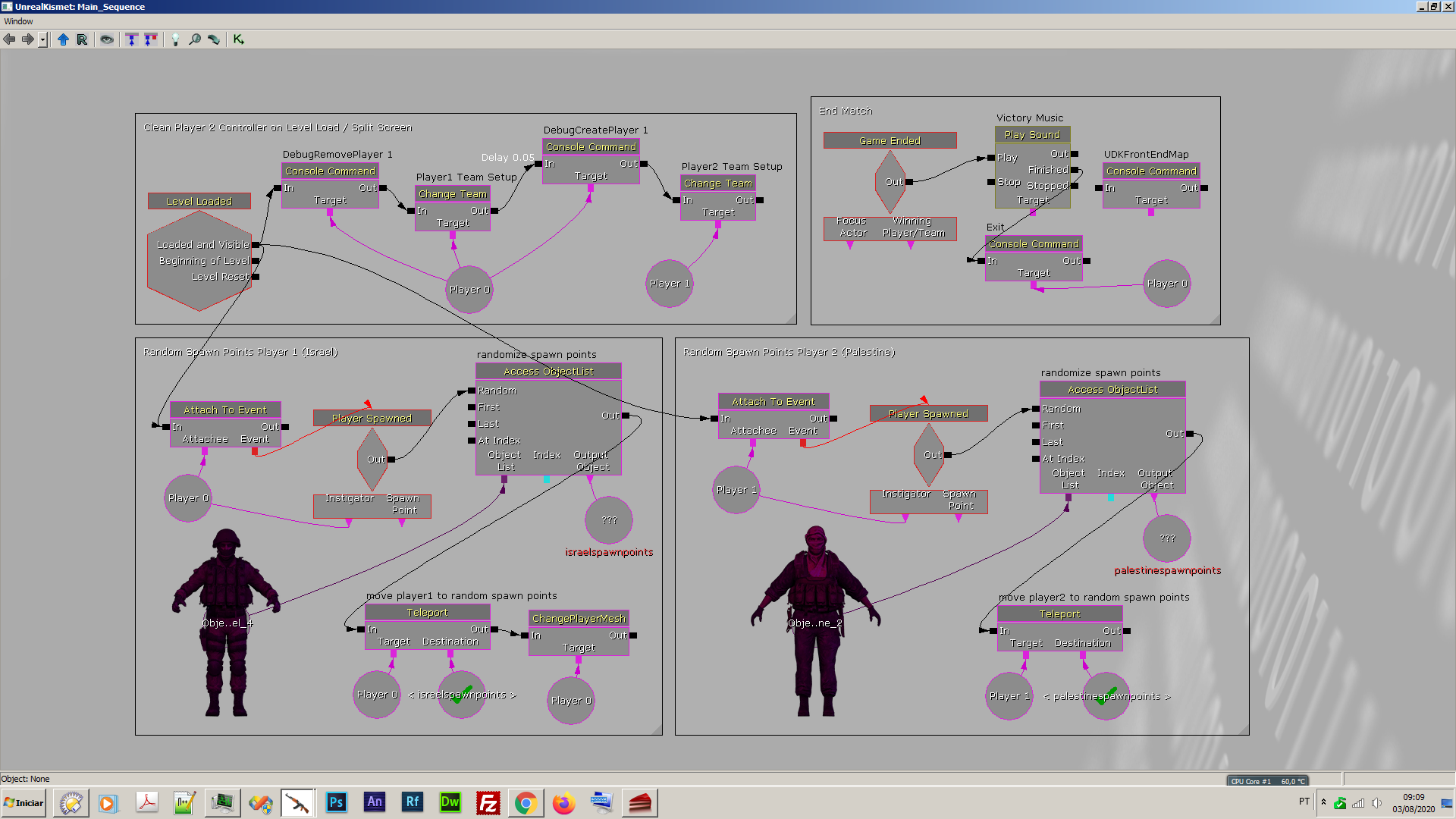 I basically used the Console Command DebugCreatePlayer 1 to spawn player 2 (index 1, because player 1 is index 0) and split the screen.

I also used the Console Command DebugRemovePlayer 1 before DebugCreatePlayer 1 because each time the map is loaded, if player 1 is not removed (cleaned), it will add a third player on the match, and split the screen into 3. These 2 character icons you see on kismet are just custom spawn points I created (using the notepad actor), but changing the icon texture. I found it better for me visualize where I placed the enemies on the map, to elaborate a better gameplay. If I would use pathnodes to spawn the enemies it would not give me a good visual feedback for me planning better the enemies placement through the map.

I used the teleport node alongside Access ObjectList to randomize the respawn points of each player, as I placed 4 custom spawn points for each player. If I use the UTTeam Player Start actors, yes, it works automatically, each time the players spawn randomly arround the map. However, I don`t know why many bots are spawned on the map, even though I added a UTMap Info on the map properties and set the min and maximum number of players to 2.

So using my custom spawn points with Access ObjecList and teleport actor node I could manually achieve this, random spawn points for each player (without spawning new bots). I only added one default Player Start for the map, and as Player 1 and Player 2 Spawn on this same point, to avoid one player dying (because one of them die if they spawn at the same time on the same point) I added a small delay of 0.05 seconds before spawning Player 2 with DebugCreatePlayer 1.

It works like a charm, whenever I play in editor as you can see here. Each player, after he dies, is respawned automatically (on different points). And whenever player 1 wins (after killing 5 times player 2), in example, the camera does a close on the winning player and the Game Ended event (of my kismet sequence) is activated automatically and the game ends as I added a kismet node for it (Console Command Exit). 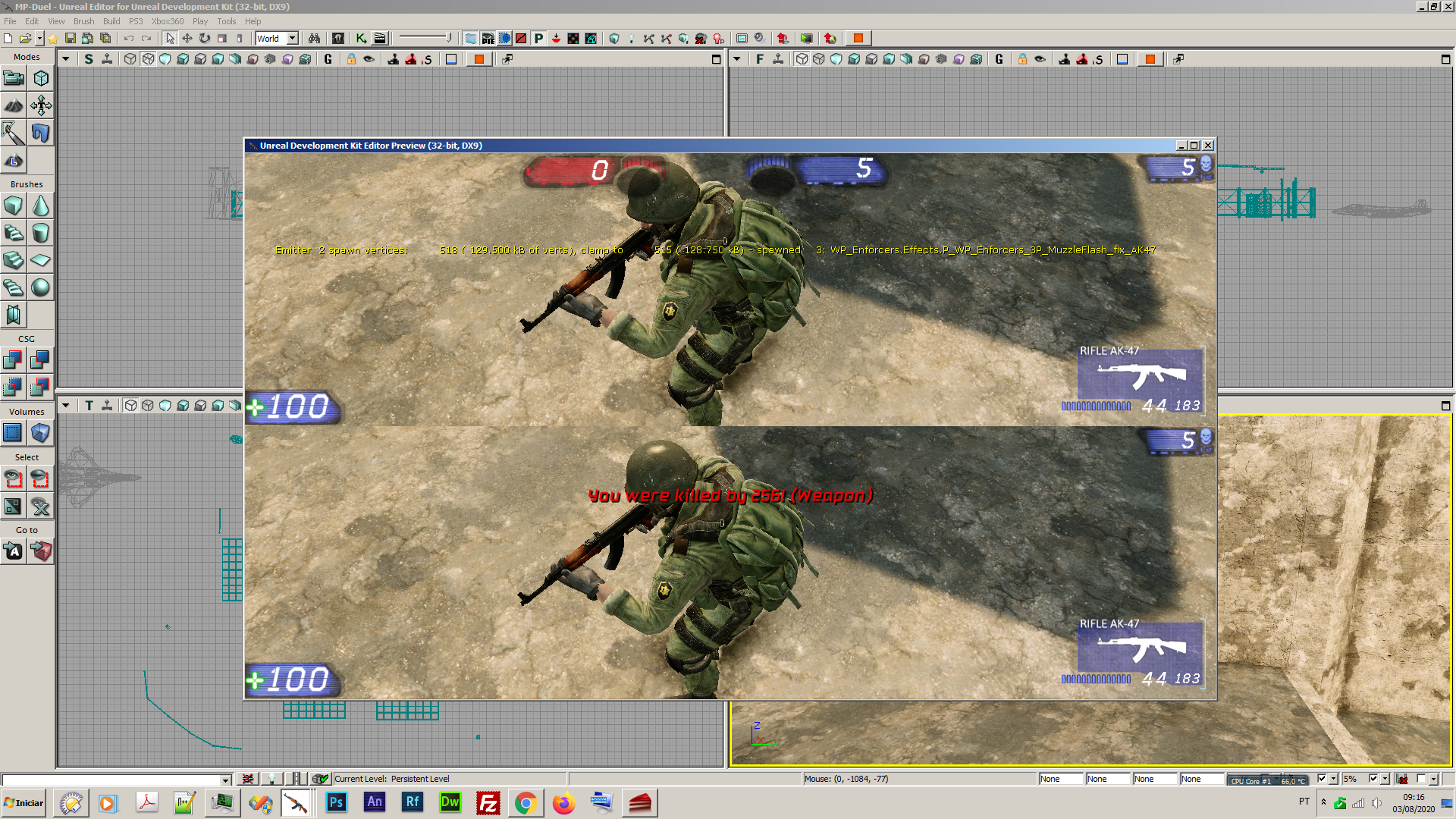 But now my problem is whenever I cook this map the match simply does not end: 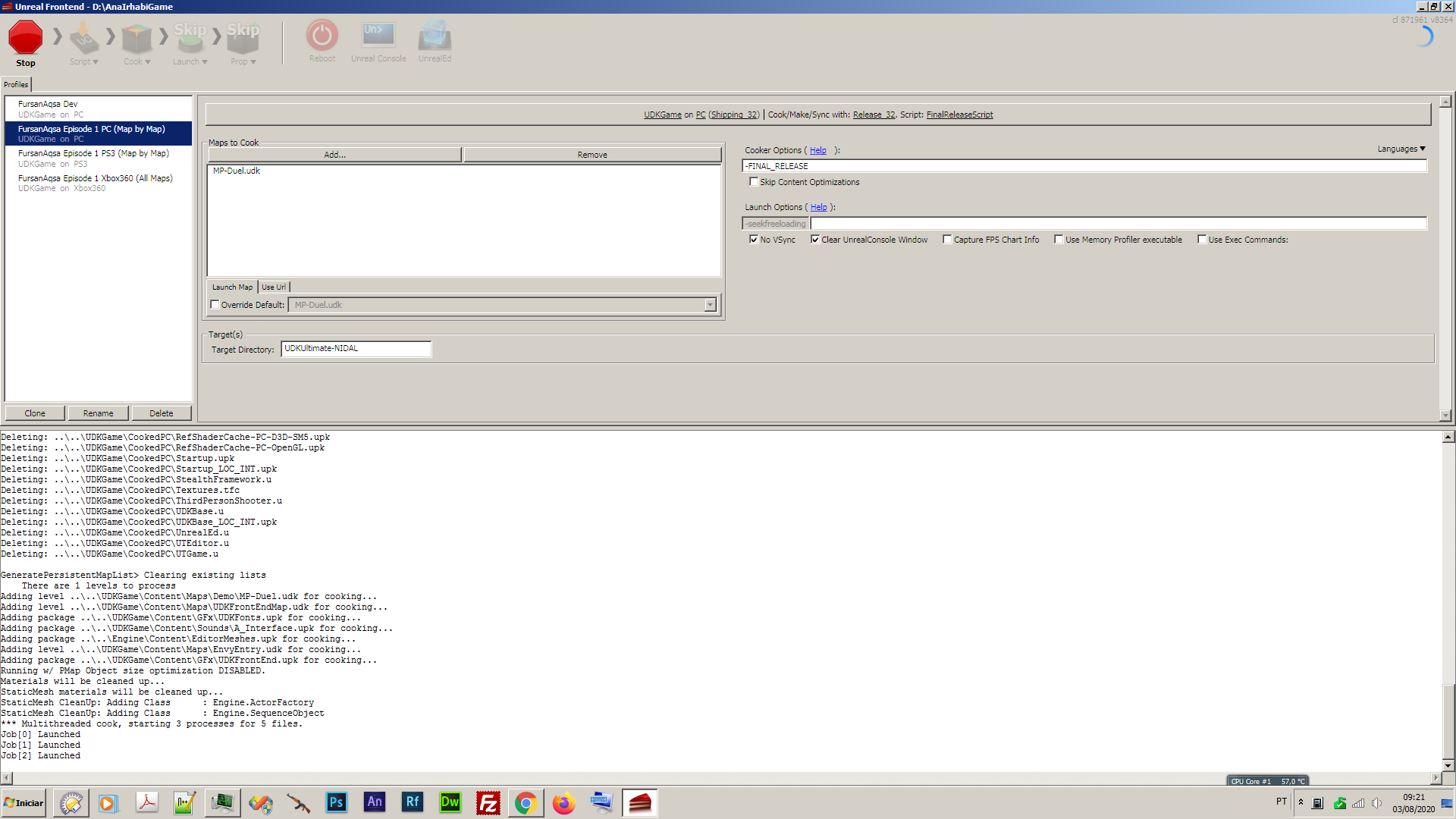 After player1 kills player2 5 times, instead of finishing the map, the game continues running with a message on player2 screen “Press Fire to Respawn” as you can see here: 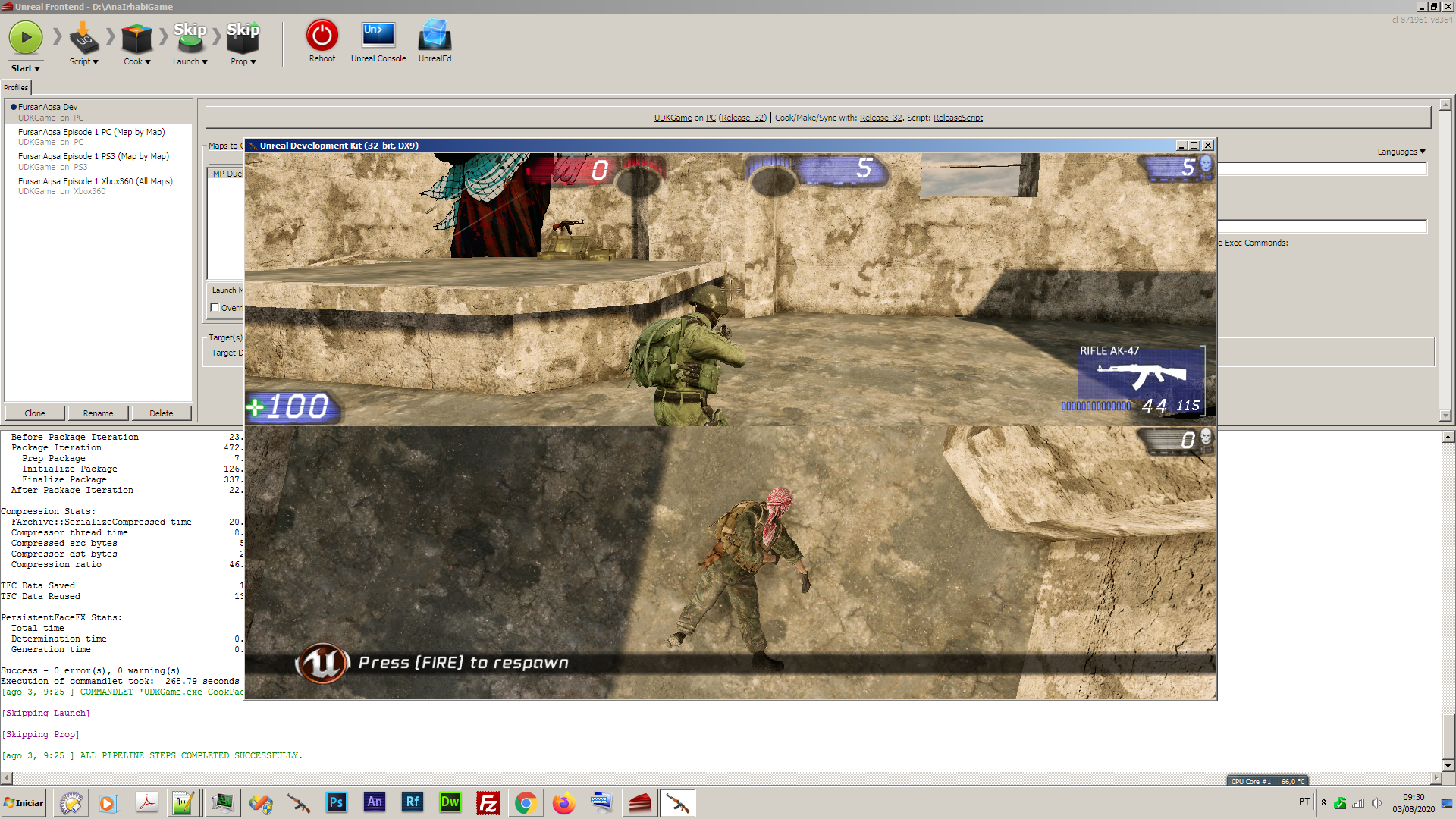 And whenever player2 presses fire it enters in the spectator mode. The same happens on the reverse, if player2 kills player1 5 times the match simply does not end!

Another important information is that any kismet node associated to player1 (which was spawned with DebugCreatePlayer 1) does not work in a cooked game (it only works withe Play in Editor), something like if this second player was kinda ghost, who does not exist in the game logic.

Please any help is important as this thing is driving me nuts! :(:(

If I could detect in kismet the number of kills of each team, I can manually end the match, and even deactivate splitscreen to play in full screen some cool flash animation like ‘PALESTINE WINS’.

SO HOW CAN I DETECT TEAM KILLS IN KISMET?

Everytime the seqEvent triggers and so, the function to call that is Trigger global event or something… that function idk if is in PC or GameInfo

I could not solve the problem, but found a workarround, which at least, works and does not “break” the game.

I simply changed the UTHUD Message from “Press [FIRE] to Respawn” to “YOU HAVE LOST THE MATCH! Press [START/ESC] to exit game” in utgame.int. So whenever the player presses Start (on PS3 / Xbox360) or ESC (PC), it opens the pause menu with the mouse focused on “Exit Game” button. 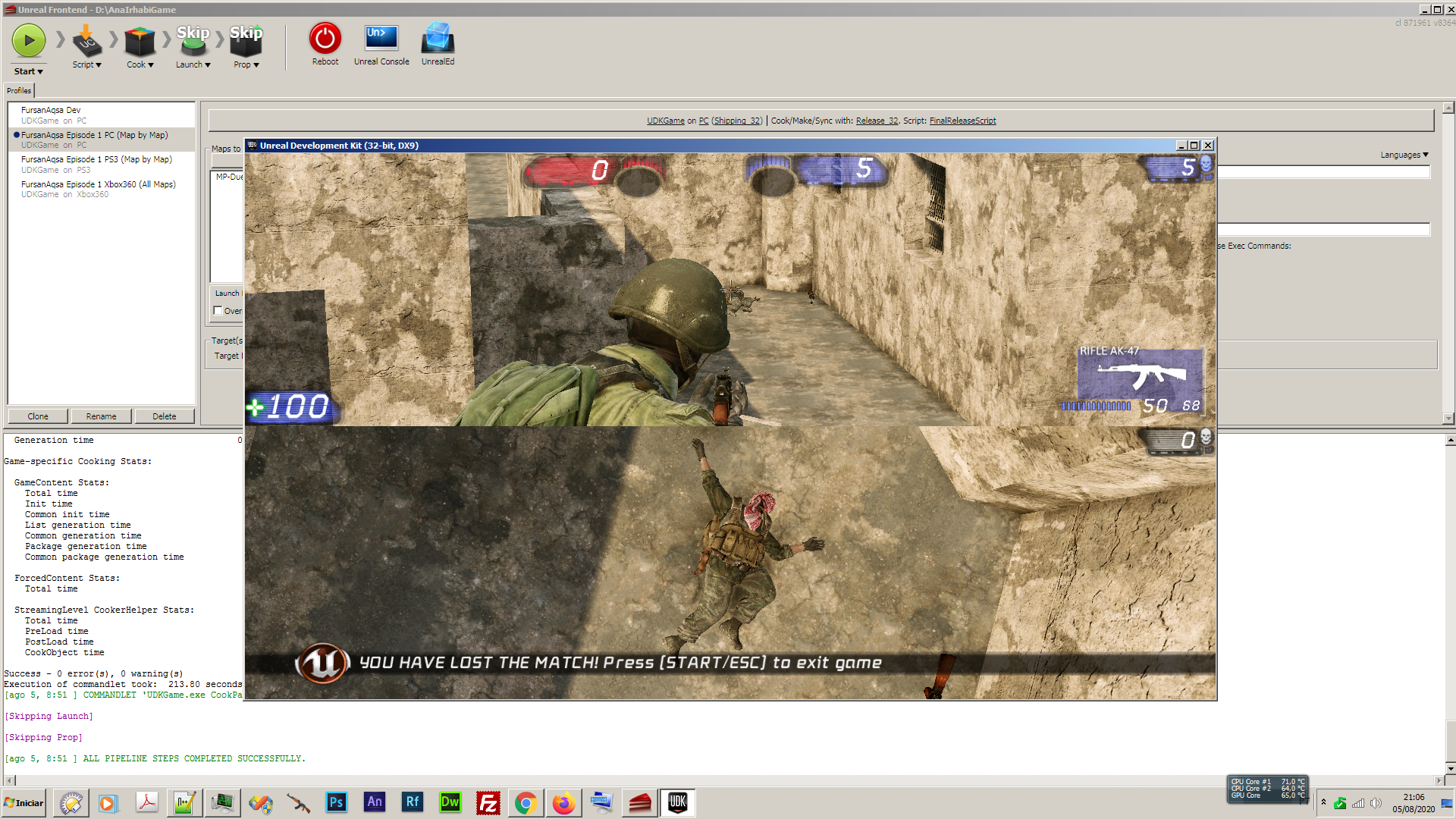