Hello friends. I am a beginner in Unreal Script, still learning. I am trying to recreate (or make something similar) to Gears of War Chainsaw Executions in UDK. I am beginning with the first step which is the player play the chainsaw attack anim. The second step is getting the enemy bot to play the chainsaw death animation at the same moment the player pawn plays the attack animation (synchronization). Then the last step is to have a camera animation to play to change from behindview to showing (close) both the player pawn and enemy.

So for the first step, I have followed this awesome tutorial:
mavrikgames.com/tutorials/melee-weapons/melee-weapon-tutorial-part-1

However, as I am extending the UT Base Classes, I have done something a bit different from the above tutorial, and I have created a normal pickup weapon to use it as a melee weapon. In fact, is not a real melee, is an instant hit weapon that has a very small range and no projectile, so is a kind of fake melee (I am doing something very basic).

The point is that I want that whenever the player presses the fire button, then the pawn (player mesh) will play a custom attack animation.

Here is the Animation Tree I created, and there is the PlayCustomAnimation node: 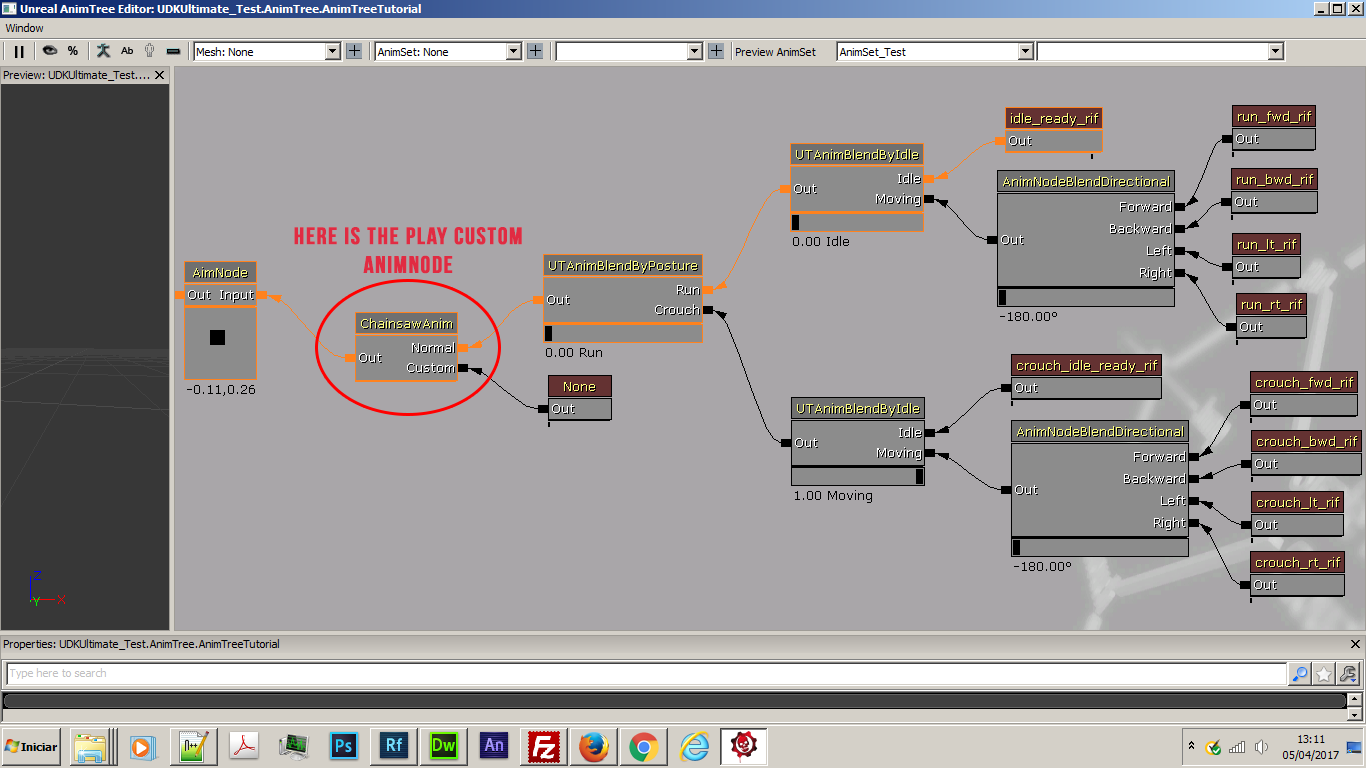 Everything is working almost perfectly, however, the problem is that I don`t know why and how that only the default UDK Animations work, play. If i setup in my code the name of any custom animation I created and imported inside the AnimationSet, it does not play.

Here are the animations playing inside UDK:

I am using the default UT3_Male Template 3dsmax biped and skeleton (70 Bones) to create my animations.

This is my pawn code. In the pawn code there is a function to find the animation node:

This is my Weapon Code. In the weapon code there is a code for “injecting” the custom animation on the empty animation node sequence that is connected to the animnodeplaycustom animation:

Babylon project is a provisional name for a open world, multi mission, single player game. It’s ambiented in the mesopotamian cultures, but it’s a fantasy, not historical, game. The game is inspired by the stories of the Anunnaki in the ancient...

When your weapon’s at Firing

This is how my Tree’s setup 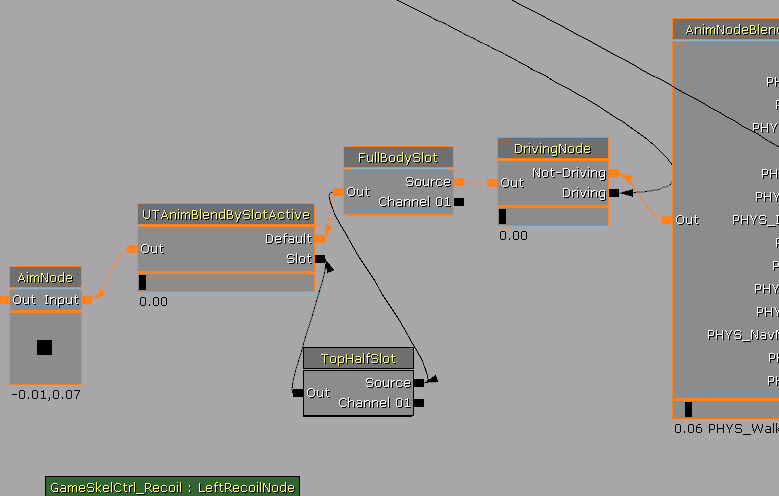 Where do you set the value for that variable (ChainsawAnimationName) ?
It seems to be empty.

Thanks for the tips. I solved the problem, it made me feel so stupid

At least, the first step I have done, now I need the second step which is to play a custom animation on the enemy once attacked by this chainsaw.

somewhere in your takedamage function for the enemy pawn.

somewhere in your takedamage function for the enemy pawn.

WOW MAN!!! THANKS!!! HOW I DID NOT THINK ABOUT THAT!!! I WILL TRY THAT SOON AND POST THE RESULTS.

I am almost sure this will work because as I am extending UT Weapon Classes, so for each weapon I created a custom damage type class, so it will work indeed.

**I trully love the Unreal Engine Comunity. The people here are so willing to help. I have learned a lot about Unreal Scripting just by browsing this forum.
**
Thanks for all

I was able to reproduce the infamous GOW Chainsaw Execution in UDK!!!

Here is what I got so far:

I know it is far away from perfect, however, for a beginner in Unreal Scripting, I think I have done a good job

But I need the help of this great comunity to polish this effect more.

Continuing my previous posts on this thread, I correctly imported the Chainsaw animations (Attack and Death) to the animation set, and created the playcustomanim nodes in the Animtree (I edited the default UDK AnimSet and AnimTree).

So the basic logic of this effect is that there is a weapon (chainsaw) which is not trully melee, is an instant hit gun with a very close fire range, giving the impression that it is melee (I just wanted something fast to try this effect), and whenever the player (Pawn) shoots the weapon, it plays a custom animation on the Pawn (Chainsaw Attack Anim).

The camera animation itself was done in a new matinee sequence. I added Marcus Fenix Skeletal Mesh and Locust Skeletal Mesh, each one on front of other, and on marcus I played (loop) the attack animation, and on the locust I played (loop) the death animation. I added a new camera actor, and positioned it as most close as the default UDK BehindView Camera. Then I just made a simple translation and rotation animation on the camera, simulating the Gears of War Chainsaw Camera. Then after the animation finished, I right clicked on the camera track on matinee editor and select export to camera anim, so then I saved this new camera anim and called it on the Locust Pawn code: 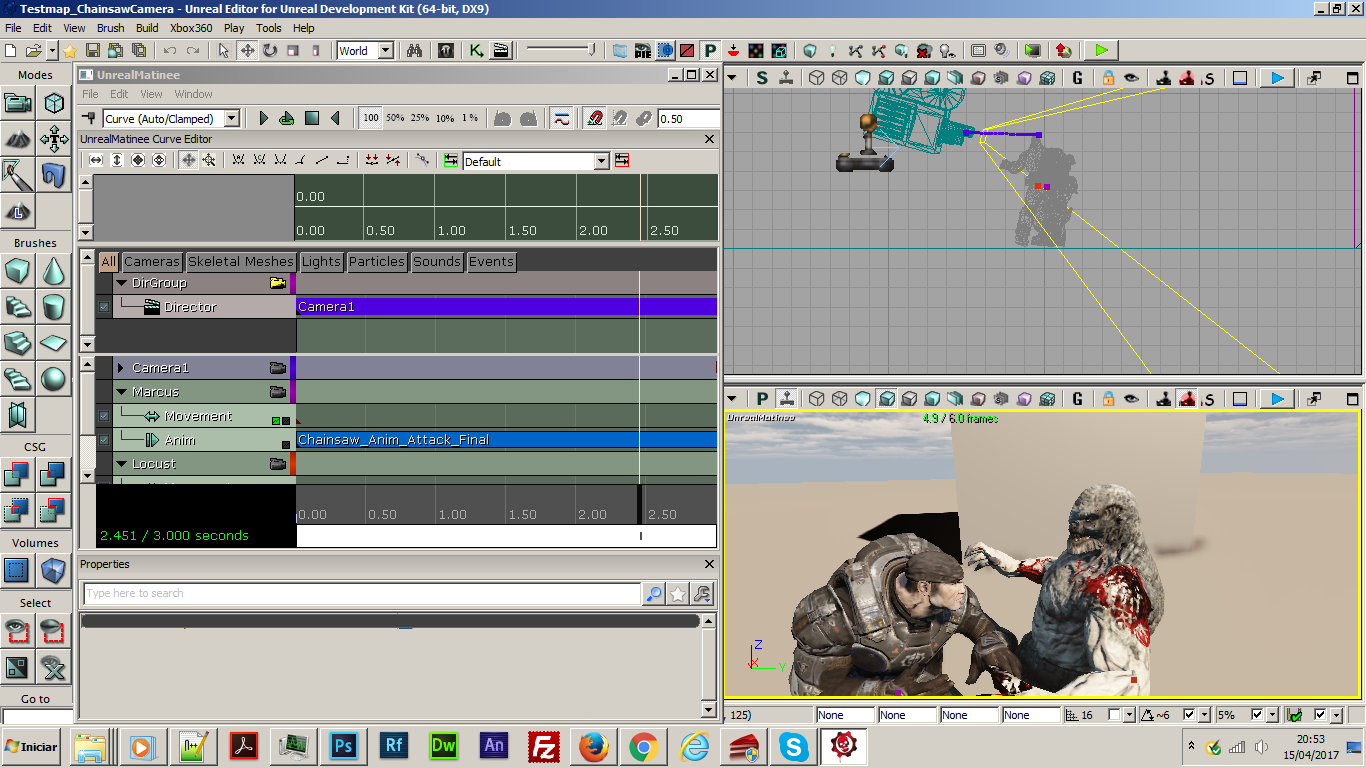 The way to make the pawn detect it was hit by the chainsaw weapon (to activate the death animation and camera animation) is to use this litle piece of code which 661gaz told me: if(damageType == class’UTDmgType_GOWChainsaw’). So long as I have extended the default UTWeapn, so because this each weapon I created has its own damage class, so this worked perfectly.

However, I need your help guys to polish this effect more. This is the LocustChainsaw Class:

2- I want that after 3 seconds from the enemy being hit (take damage event), the enemy dies (ragdoll), because 3 seconds is the total time of the chainsaw attack animation. I tried to add self.Destroy(), however the enemy simple dissapears. And I still did not learn how to add a kind of timer in Unreal Scripting.

3- I need that both the player and the enemy become immobile, no movement as soon as the execution sequence begins. Because on this test I made, if I move the player, he will move away from the enemy whilst the attack animation will be playing so “breaking” the animation effect.

4- Last, but not least, I need to make a kind of condition, a master condition that will let the execution effect play only if this condition is met. In example, that both the player and the enemy are close to each other and facing each other, one looking at other (i.e, not aproaching from behind)

im not sure how to check if they are facing each other,ive not mastered that yet.

for number 2 use suicide();

661Gaz pretty explained it, so this is supplemental - several ways of looking at the same thing may help out.

My code has different reactions to different weapons. The code is for my civilians - 1 hit and they go thru dying sequences according to what hit them. There are timers in use as you can see, even as 661gaz above has timers.

Move the bot on to the final death. The burn hits end in the same place, Suicide()

Hope it’s of some use.

THANKS FOR THE HELP!!!

I will try all your tips and then I post here the results.

Finally I finished the GOW Chainsaw Execution inside UDK:

Is not perfect, however for a beginner on unreal Scripting, I think the results are very good and I even created a basic and fast blood on screen effect.

So now for the tech.

Thanks @Snipe34 and @661gaz, your tips helped me a lot, especially the SetTimer function.

So the way to make the pawn “freeze” was not only groundspeed = 0, because it only makes him stop moving, but does not avoid him of turning and worse, shooting.

So i added these other native pawn functions (too much study on UDN untill find those):

Then I have setup a timer to call the suicide() function:

It was very easy.

So after too much study and search, I found these player controller functions and I used:

Then I setup another timer to come back to normal:

So the effect is there, not perfect, however, for myself it was a GREAT ACHIEVEMENT.

About the camera, it`s a bit jerky and glitchi because I have setup a very primitive 3rd person camera in kismet (target view camera actor), because the 3rd person camera I am using on my custom gametype is based on the BehindView command (UDK | CameraTechnicalGuide Third Person Camera), and by my tests, it seems that the behindview DOES NOT ACCEPT camera animations, so because that I wanted a very basic 3rd person view just to test the chainsaw execution.

Now I have only 2 more doubts left:

1- I want that the player pawn only plays the Attack Animation if close to a certain distance from the enemy. In this code, what plays the animation is the weapon chainsaw, whenever the player presses the fire button:

I have seen that there is a weapon function called CanAttack which checks if the weapon is inside its range to damage the enemy, and thats exactly what I need, that the attack animation only plays if the player is close to the enemy. The problem is that I don`t know the correct syntax of this function.

I tried the following, but received compile errors:

I tried the following code on the enemy pawn to trigger the attack animation on the player pawn:

My idea is that if we can have the enemy pawn class to trigger both the animation on itself and on the player, this will open the door to having multiple execution animations. In example, I know we can randomize an array of multiple animations sequences, however, it will be hard to randomize the animations and have both kill and death matching. In example, we could have one enemy class that will trigger the Death_A_Attack and Death_A_Death, other enemy class will trigger the Death_B_Attack and Death_B_death, and so on.

Please any tips will be of immense help.

if your extending utpawn,try this.

a keep up the good work,youre doing great.

if your extending utpawn,try this.

a keep up the good work,youre doing great.

Hello bro, thanks for the tips, however, it did not work, I received the error on compiling: ‘UDKUltimatePawn’ bad command or expression

By the way, do you know how to use the weapon function CanAttack()?

as udkultimatepawn is the player I guess it is the only one in the game,if so then you can do this

you then have theultimateplayer as a reference to the pawn to use throughout the script.

don’t know about CanAttack() but I will take a look tomorrow.