Help with camera issue on pawn

I am a newbie with ue4. But i created a first person map, and want my character to be third person. I am using the default third person example pawn. It was working before but now when I click play my third person pawn runs but get stuck on nothing and runs in place for a bit then gets stuck again runs normal and repeats this. All the while the camera is zooming in and out on him crazily. Ive look at all the settings so many times, and created new pawns and used different movement blueprints, tried googling it to no avail. I have many hours in this map and not sure what the issue is. Am i stuck recreating this as a third person map or shouldnt that matter? Any help would be appreciated as this is driving me batty.
Thanks.

No matter what, there is no reason why you have to lose your map. If you create a new project, you can import that map into the new project.

Now to the issue:

Have you imported a character from Mixamo? When importing anims from there you need to make sure that you set the “in place” option during the download. (Note: You can’t set that setting before the download if you’re importing a pack of anims) Either way, you can still change this setting once in Unreal. It kind of sounds like this is your issue.

If you haven’t imported a character from Mixamo then I’m not sure what’s going on. Can you post us a video to showing the issue? Until then, you can try deleting the ThirdPersonCharacter blueprint and reimporting it. Starting fresh with it without whatever changes you made that are causing the issue. (maybe make a backup of it, just in case.)

Thanks for the reply. No my pawn came from the first person example map I believe you get with UE4. I try to reimport and see what happens.

So I was able to fix the zooming in and out issue by moving the camera boom. Unsure why it was not working in my project with the 3rd person guy when it was in a new map. But I am still having an issue with my pawn getting stuck on seemingly nothing. He will run around some but then run in place and not move forward like he is colliding with something. I made a new plane up in the air away from everything so he cannot be hitting anything. I can move left and right and jump some to get him to go again for a while but it happens again. Perhaps something with animation? I am currently using the greystone character off of the marketplace. Any help would be greatly appreciated. 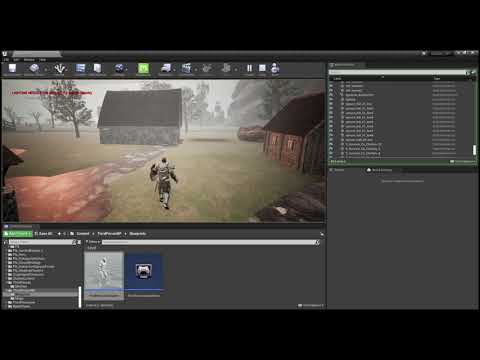 Here is a video of what it is doing.