ok, guy currently i’m working on the level boss and working on his spawn, while i did the “basic spawn” and works fine, it’s not what i really want, here my current spawn:
1- i’ve created a “spawn actor” to spawn my boss here the bp: 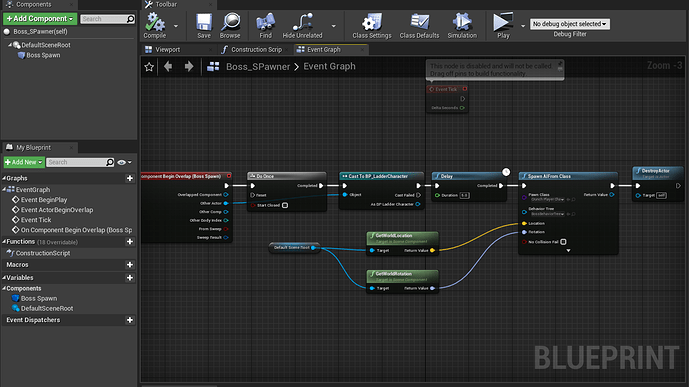 it’s basically works like, when the player "enter the collision cube it will wait 5s then spawn the boss then destroy the actor.

then in the ai controller i have this: 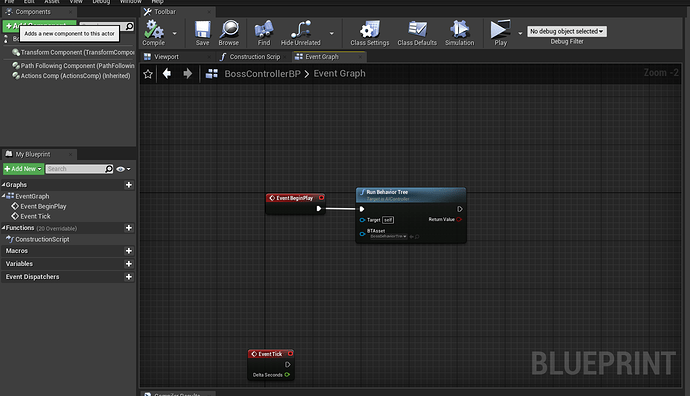 ok here the thing, i want to when i enter the collision zone, the boss will spawn without the delay but before he start to “run” the behaviour tree, he will play a montage animation which is a “entry for the boss” then after that it will have a "delay for a small entry dialogue box, then after the delay and dialogue finished he start to run the behaviou tree, don’t worry the player character is also paused during this time.

basically i want to create a “event” just after the boss spawn, where the game will do a sort of pause, the boss does his entrance a dialogue comes then after that event end the fight start, the dialogue stuff is not a issue i can handle it, the issue is to control the AI to after it spawn, it will do it animation entrance then after x time it wil start to run it behaviour tree.

how i can do that?? any good tip or advice, or tutorial, as i told i’m just want to know how to proper control the ai to do the event properly which is do it entry animation then after x second which it will really start the battle, before that the boss will play the animation once then will be "waiting until the event ends to start to really proper act.

i’ve already tried some stuffs but nothing worked, currently one of the issues is which the AI already start to “running the moment it spawn” and i can’t say it to “wait” for the event before it start to “act”.

the best i managed to do so far is just make the boss spawn after the “pause” event, which is not exactly what i really want.

you reach the boss point then boss spawn and play it intro animation then the dialogue comes then after x time the dialogue ends and boss fight start.

not an expert about A.I. but you should be able to share some variables with a blackboard and make the A.I. react to that, 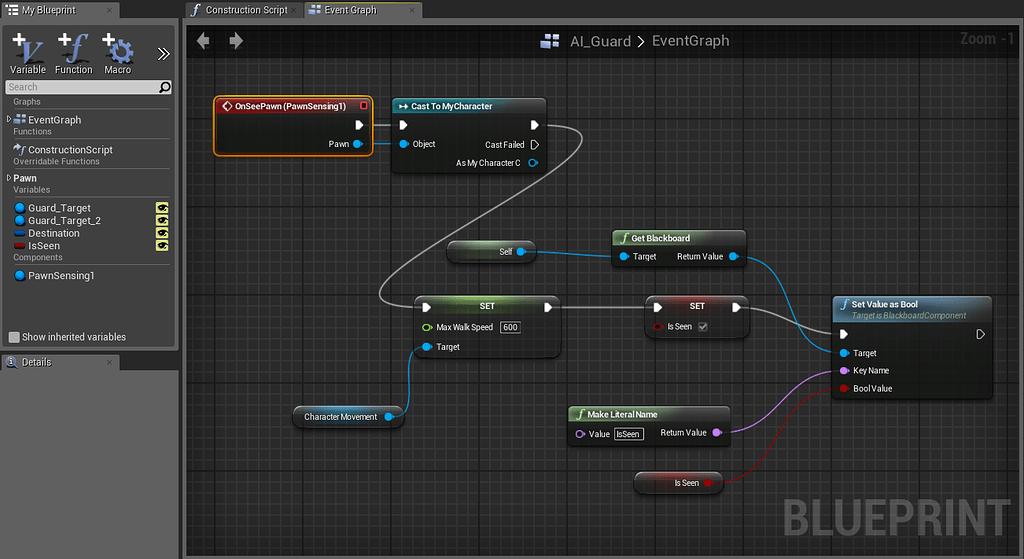 Here Is my blueprint that changes the speed of my AI when They see the player. But the problem is the decorator on the top selector allways says that the Bool is not set, even though i can watch the bool change from true to false at runtime how...

interesting, at first i was trying to do it outside the BT in the blueprints, like instead of calling the BT at the event beginning play, do it on a tick and put a branch condition however the issue was it didn’t worked well, maybe i can do that in the BT as you pointed

not totally on topic but very related:

hy guys i’m in need of a little “help” with the ai currently i’m working with using a BT for my enemies and i’m experiencing 2 weirds issues: 1 - Enemy attacking only after leave the "vision range: here my enemyBP [bp01.PNG] [bp02] [bp03] [bp04] [bp05] [bp06] i’m using a collision box named vision box as enemy trigger to attack and using the 3 functions to call for the “attack”, now here my BT: [bp08] [bp07] ive created 2 keys one for the player for the ai recognize the player and…

because i’m planning to use the same logic for the boss too but with some more “attacks”, then probably the same issue gonna happens then it would solve the possible same issue in a future.