I’m getting this odd bug where some textures start glowing - not always pink like this, sometimes its bright green or orange. I’m thinking my video card might be about to die, but could be something in the scene maybe. Seems to happen more when the temps are 90ºC+

Anyone had this happen before? I’m on a 2018 MacbookPro with Radeon Pro 560X GPU/4GB VRAM.

First pic is normal, 2nd is where it get messed up. 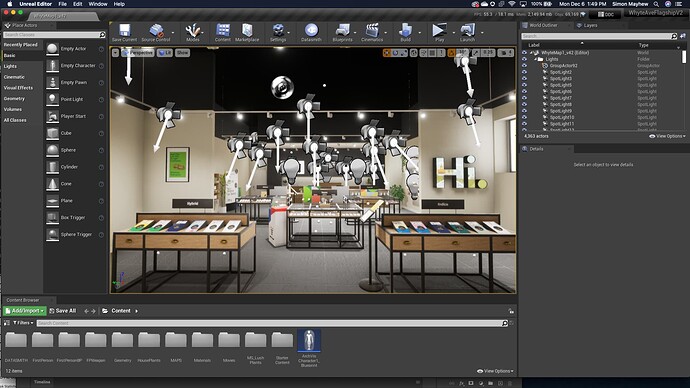 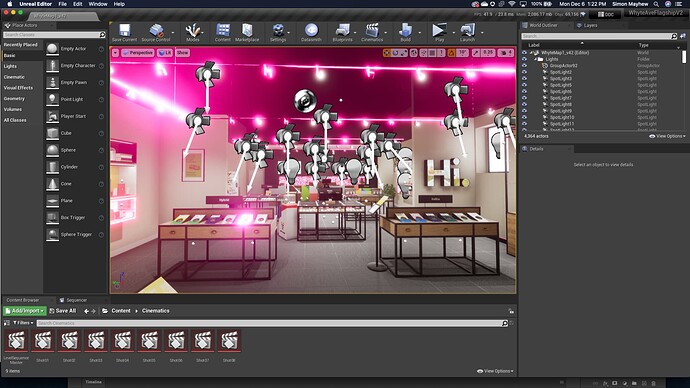 you have a ton of overlapping spotlights and some overlapped point lights…the engine has a default limit of 4, and any more beyond that it usually shows a red X on the additional lights. What is the mobility of the lights? is the project mobile / PC / console…or something else?

It’ll either cull those lights or there’ll be lighting problems…which could mean incorrect colors too.

The lights are all static so no red 'X’es. I’m fairly new with unreal - but as far as I understand these static lights shouldn’t be using up resources after a lighting build – maybe I’m wrong on that one.

The GPU is hitting 100ºC - these macbooks can run hot, but I always thought they were supposed to throttle down the CPU/GPU clock when that happened. Some other artifacts are happening too - flashing white screen, some odd triangles appearing here and there. Only started appearing recently in the project as I added more objects into the scene.

You are right: you can have as many Static lights in your scene as you want and after building the lights they are “free” since, they baked into maps!! With Stationary lights /overlapping/ you have the 4 limit!!
I’d say the problem is NOT caused by the number of lights!! You don’t even have that many in this scene tbh…
You could be right about your GPU if you see other weird things too!!
Just a couple of questions: have you changed anything extra in your lights except intensity? Do you rebuild your reflections too? /does the reflection view mode look ok?/ Do you have any lights that intersect geometry?

Update - I opened up the laptop and blew out a ton of dust. Temps are sitting way lower now and the glowing textures are gone… Fingers crossed!