New to unreal and following a very simple Udemy tutorial. It has begun to introduce concepts such as static meshes, collisions and basic physics. According to the tutorial this mesh should gently roll onto the floor of the world, but unfortunately it appears to whoosh away from the scene as soon as I hit play.

It definitely seems to be something to do with the object’s collision options. When I change to other ‘Collision Presets’ in the editor the object either drops down gently or stays put. On most conventional presets, however, it insists on whooshing away.

Physics is enabled on the thing that is flying away.

Something on the platform has a collision volume around it.

There may be 2 different collisions interacting with each other; causing the fling. Maybe the mesh you are using already has collision, if it does you don’t need a collider. Eatherway I’m pretty sure multiple physics interactions are causing it.

Try using your collision views, either player or visibility and see how it looks. I agree with the others, you wanna see if it’s intersecting another object. 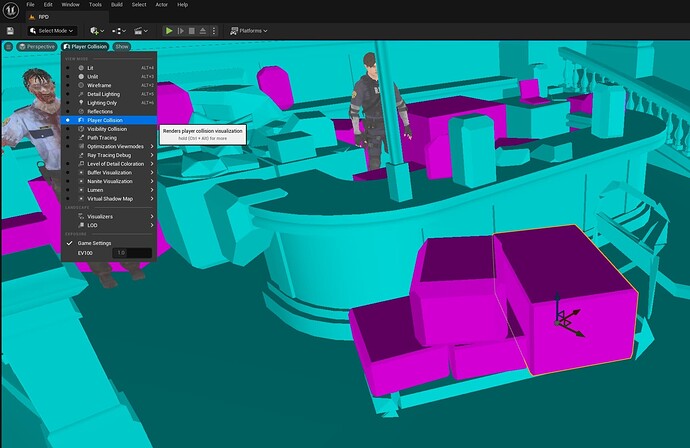 Thank you guys! I’m inclined to agree that it is a problem with intersecting meshes somehow. Thank you especially @IceDDZ, I had no idea that you could see your scene in this way!

but I will let you know! Cheers

I want to say thank you for the tip about collision views, since I’m quite new to Unreal I didn’t even know about view modes yet and having zoomed out in this view it looks like a resource object in the tutorial has a collision that is causing major errors for all that sits below it in the scene. I took the object out of the scene and the physics applies as it should–something I probably should have tried before I consulted the forums haha.

I really appreciate the help. With a system as technically vast and daunting as Unreal it can be discouraging to encounter seemingly insoluble errors so early on. Now I view this as a learning experience instead of a headache. Thank you so much!