[FONT=Arial Black]I am new to game development and UE4 itself so by all means, treat me as stupid because when it comes to this stuff, I am. However at the same time I am learning, and am trying to soak up as much experience and knowledge as I can so I can create the project I want to, and this is the very first issue I’ve come across. I’m trying to import a test heightmap into UE4 as a learning experience for when I import and work on the actual thing, and am running into this frustrating situation. Let me list my exact process for what I’m doing so hopefully it will help.

I’m using a program called terrain.party to grab a heightmap of an actual location from Earth. The heightmap is 60km, as that is the size I need it.

Here is a screen grab of terrain.party and the location I’m exporting as a heightmap: 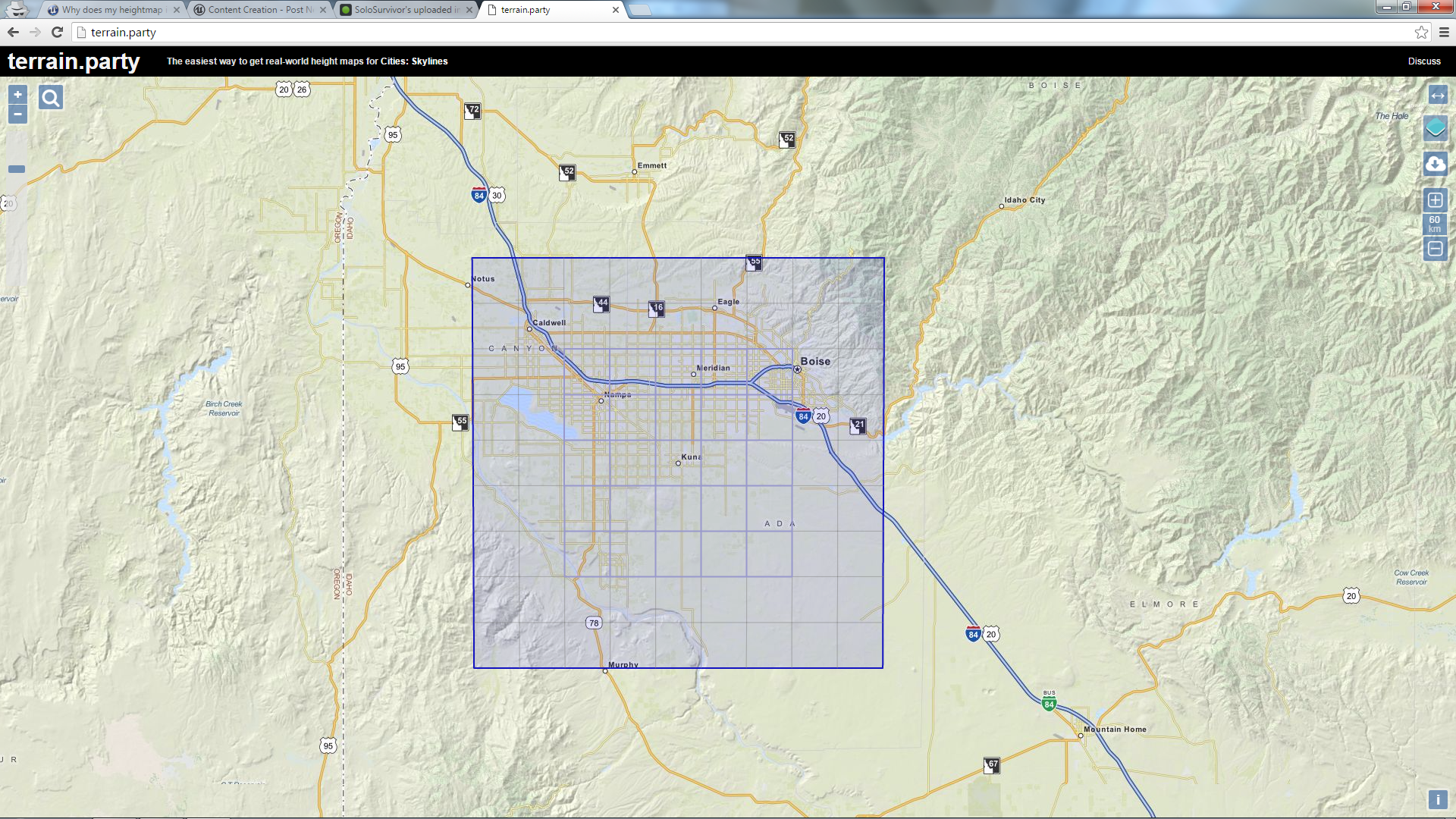 As you can see, the blue square is 60 km. When I export it, it gives me the black and white heightmaps of it, as heightmaps should look: 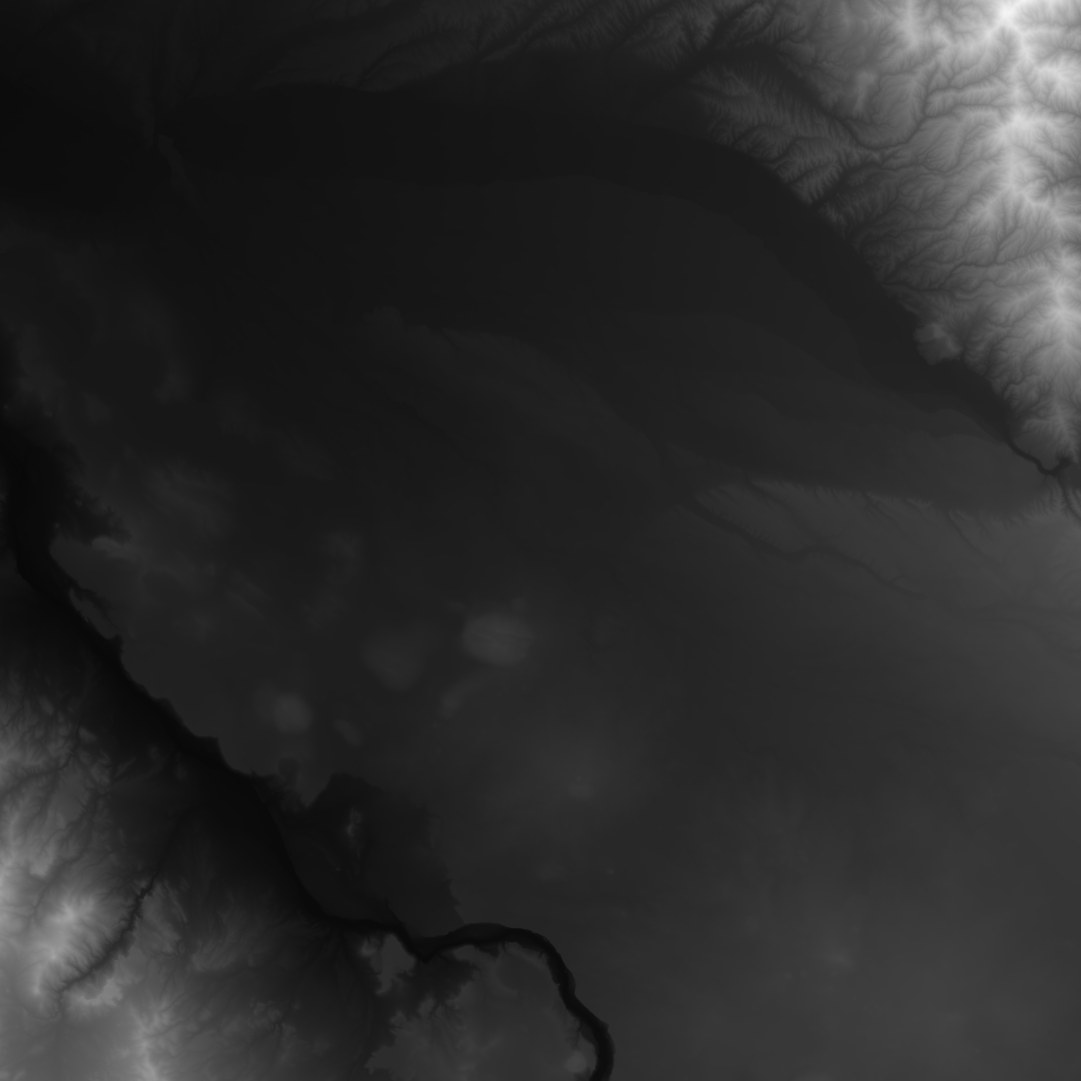 I then load the heightmap from file with the Manage Landscape option, and then click to import it into UE4. This is how it turns out: 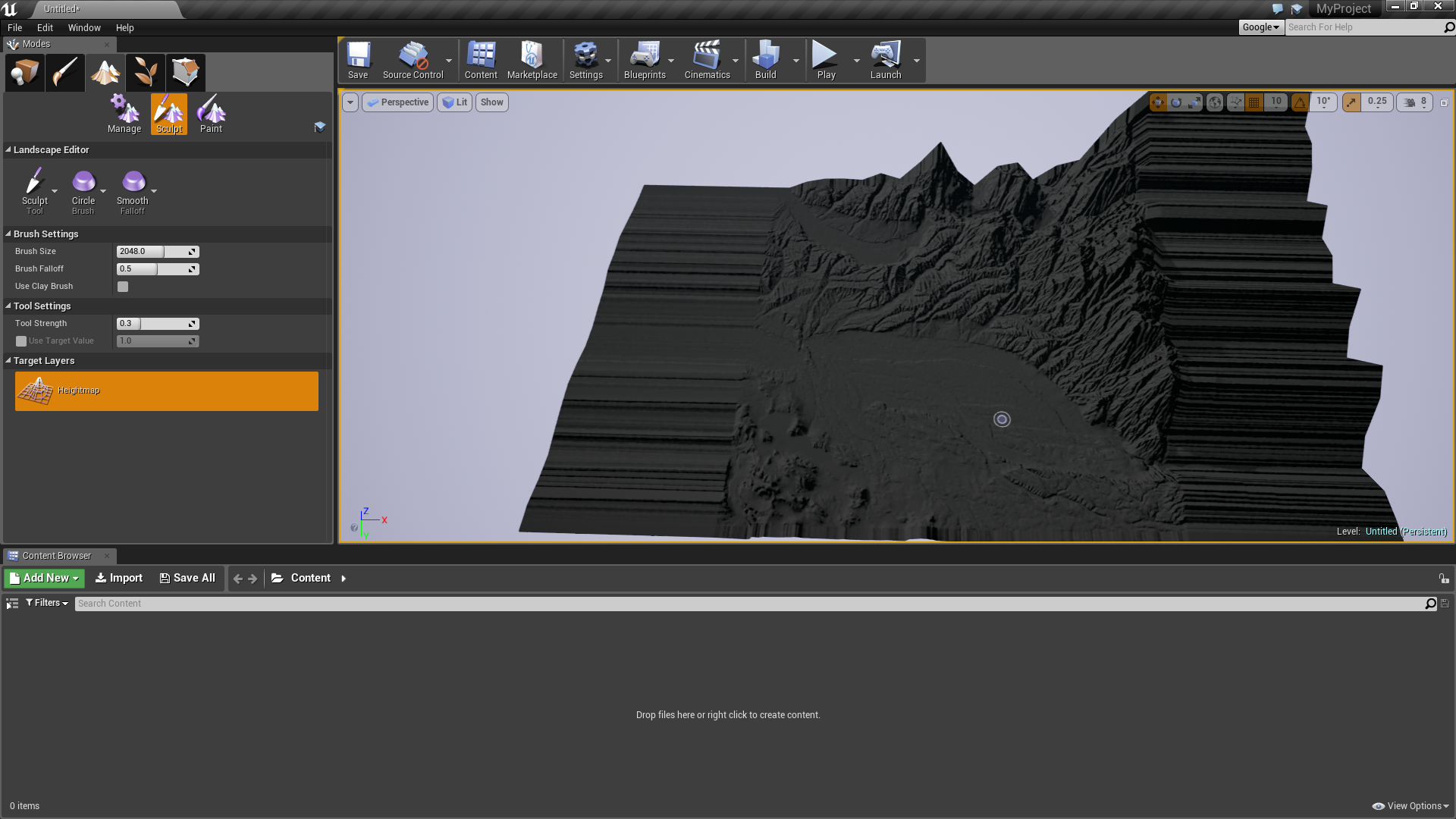 UE4 seems to both condense my landscape - shrink it - and sometimes, but not always, stretch it at the ends like in this example. It makes my landscape smaller, shrinking it to where the areas come together and raise higher, and you can see that especially with the mountains. So when I import my HMap, it goes from being a 60km landscape to…I don’t know. Now I know there are a bunch of scaling options, resolution and such in UE4, but I do not mess with those. I have never seen any documentation or videos stating that I need to change these settings, even with the official UE4 documentation. I have looked everywhere for a fix to this problem, but I cannot find one. So I’m turning to you guys. If someone could please explain step by step what I need to do with my heightmap in order for it to successfully and properly import into UE4 at the correct size that I need it (60km), and let me know what I’m doing wrong I would be grateful. If there is a tuturial, or comprehensive explanation out there that anyone knows of, please share a link. If anyone else is having this problem, let’s share our frustration together! I feel all alone in this. D:

It’s pretty late here so I won’t type out a full fix until I get some sleep, though I feel obligated to tell you that importing a 60km landscape will not work by default as the maximum world size that UE4 allows is 20km without using the World Composition tool. Look into World Composition and go from there.

Would it be better to build in pieces of 20km and stitch them together to make as big of a map as I need, using World Composition?

Hi, you can find some info on this in the “Official Wiki”

I’ll be having a read myself as this is something I intend to work with also with my project.

Yes it is not corect resolution you need to use 4033 x 4033 or 8129 x 8129. Then those lines wil go. Every one want to make world’s that are so huge, but have litle experance. 60KM wont work with out a custom sky box the skybox will only fit landscapes of a max size of 20KM. And go researh a bit more you need to know the fromulas for landscapes.

If you are building a flight simulator or some other flying-type game where you will cover large areas of land rapidly, then you will definitely need to look into World Composition (the link that @PerfsPC posted).

If you are building a first person or 3rd person game, then I have an alternative for you: scale down your arena. 60 km is really, really big. Like 3 hours just to run flat-out from one side of the map to the other. You sure you want your players to have to put in 3 hours of gameplay just to get to the other side of the map? My current project is based off of the island of Oahu which is, in reality, ~45km. But I don’t have a 45km map. My level is only 16km (which still takes 1/2 an hour to get from one side to the other).

I realize I have no experience. But if you have the tenacity to go after something you really want to do, you can accomplish anything. And anyone, whether they have experience or not, can make a game. You just have to go through a TON of **** and spend countless hours over forums, tutorials and videos pleading for help all the while probably looking like a fool.

I’m aware now that I can’t import a 60km map all at once, and most likely need to do it piece by piece in 20km or smaller parts and “stitch” them together using World Composition until I have it the size I want. And if I need to make a custom skybox, which I haven’t heard anything about, then I will.

Thanks for the reply, Kirk!

I’m not building a flying game though possibly might have a few aerial vehicles in it. I’m building a 1st person game and probably won’t add 3rd, but it’s a possibility I may have both. I’ve realized that importing a 60km map all at once is ridiculous and impossible so I’ve decided, now that I know UE4 can only take 20km landscapes at a time and you can’t make them bigger without messing with World Composition, to do it piece by piece. Either in 20km pieces or smaller, depending. It sounds like I’ll have to look at tiling as well.

As for how big I want my game to be, honestly I only went with the 60km idea first because that was the biggest terrain.party would let me get. I also didn’t know how exactly big I wanted my world to be, but I definitely want my world to be pretty big. I don’t mind it taking 3 hours or more to get from one end of my map to the other, but whether or I’ll make it 60km or more, I don’t know. I know that’s huge, and it just being me developing this it would take awhile.

For my game, the environment starts out in a desert-like area with no city, (think of an area where they’d put a prison), and I’m doing that on purpose. One of the reasons being, is that the area is, at least I think, a good one to start out with learning. Fewer buildings, less things to put in the scene, less to manage. It’ll mostly be the terrain and scenic views I have to worry about with buildings sparse. Of course though I’m going to introduce a city into the mix, but there’s one building that will be the main focus, at least for the start of the game. I may or may not just simply focus on that building for the entire game, but I don’t know. I don’t want to give too many details right now.

I think I’ve managed to successfully import an 8km test terrain, by changing the resolution in UE4 to 1027 I think it was, and that resolution seems to be perfect. You say 8129 is for an 8km map, but if I go over 1027 it stretches the edges like in the picture I posted. Or do you mean edit the image in Photoshop to have a resolution of 8129? I’ll post more images of my progress soon.

Thanks for showing interest. It means a lot!

Yes, sorry, I meant resizing the image before you import it into UE. Resizing in Photoshop will work, though just doing that will probably yield a rather soft, rolling terrain. Not bad if that’s what you’re looking for, but in my case I wanted more detail than that. I ended up importing my geo map into World Machine and running it through some erosion and other filters to give it more character.

I believe 8k is the biggest “chunk” that UE can import via the landscape tool. May be wrong about that, though. Didn’t spend a ton of time trying to figure out importing a whole map in one shot. I made the decision to go with world composition pretty early on.

Copy that. I’ll try resizing it in Photoshop and import it into UE4 tonight to see how it does. I’m not sure how to resize it in World Machine, so unless Photoshop gives me horrible results I’ll probably just stick with that. I should probably use World Machine anyway, but I’m not certain I want to yet. And a poster here said 20km was the biggest terrain you could import into UE4. I tried that with the same specifications that I used for my 8km terrain, and it seemed to have worked. I’ll post my results here.

Definitely have to look into world composition tonight.

The landscape is supposed to be on this grid, right? 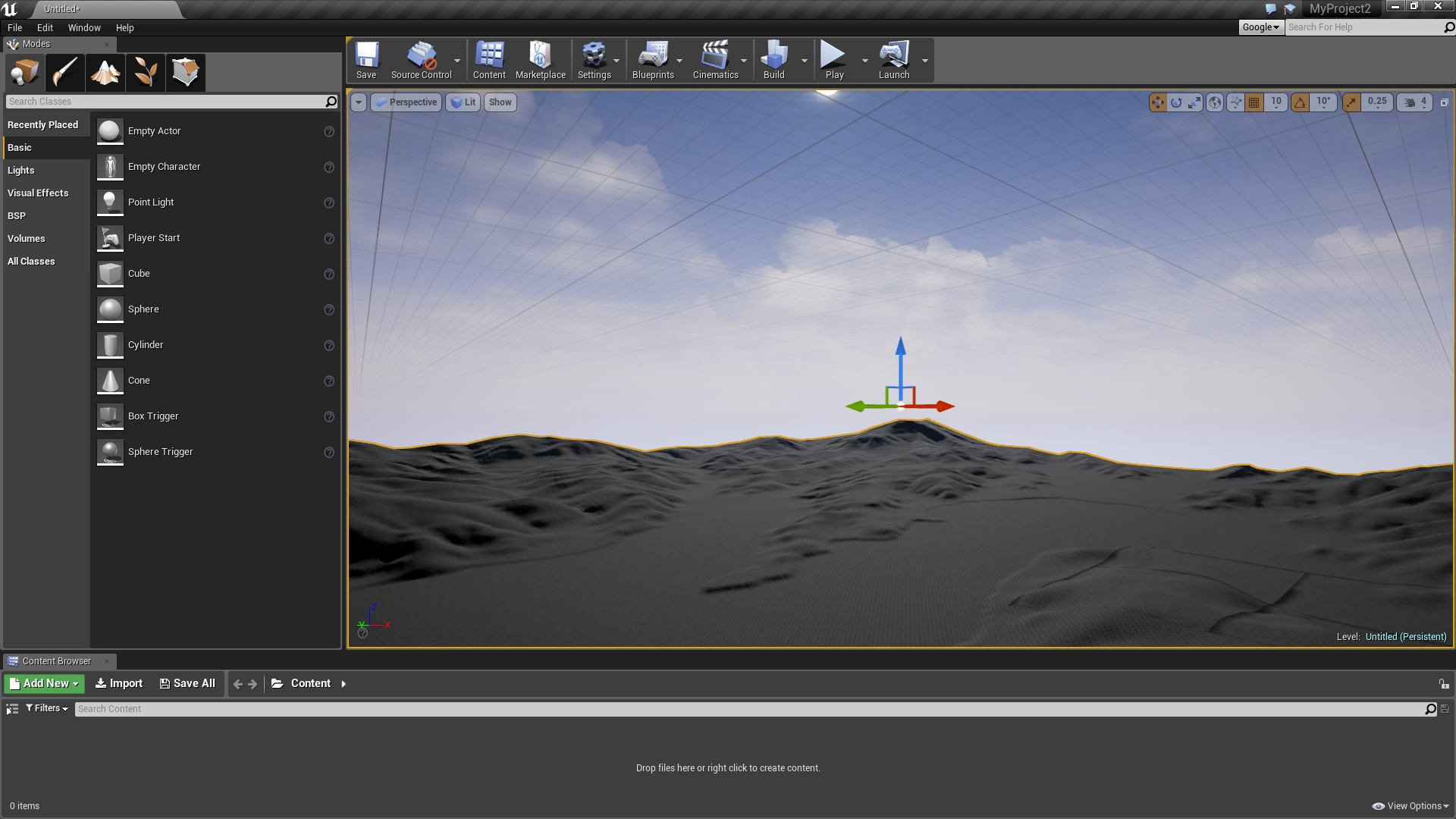 How do you properly place the grid once you get your heightmap in UE4? Also, I’ve just confirmed using Earth Pro and UE4 that my importing method works just nicely. More pics later.

That grid is at z = 0, and when you import a landscape into UE that has, for example, a max height of 100 unreal units, then the landscape will be imported from -50 to 50. i.e. The grid will be in the vertical center of your landscape.

Ah, so it’s supposed to be there. Good to know.

I realize I have no experience. But if you have the tenacity to go after something you really want to do, you can accomplish anything. And anyone, whether they have experience or not, can make a game. You just have to go through a TON of **** and spend countless hours over forums, tutorials and videos pleading for help all the while probably looking like a fool.

I’m aware now that I can’t import a 60km map all at once, and most likely need to do it piece by piece in 20km or smaller parts and “stitch” them together using World Composition until I have it the size I want. And if I need to make a custom skybox, which I haven’t heard anything about, then I will.