I hope I’m not asking for too much, but I was wondering how I make a heart-based health not based on the Legend of Zelda.

What I mean by non-Zelda is that in the Legend of Zelda games, the heart-based health system uses fractions, which results in things liking having 3 full hearts & 1/4 of a fourth heart, whereas in my own game I simply want to use whole numbers i.e. having three hearts means that the player can only take three hits before they die and not any other number of hits.

Unfortunately, every tutorial I’ve encountered so far in making a heart-based health system has been on Legend of Zelda’s, such as this one, or this one, and finally, this one. In theory, I could just modified one of the blueprint setups from one of the linked tutorials but I’m not confident enough in my own abilities to do so without creating a disastrous mess.

Something else that needs to be taken into consideration is that the health system needs placed into the Game Mode blueprint. The reason for this is because in the game I’m making, the player will able to switch between multiple different characters, all of which share the same health pool, and I assume that if the health system is placed within my only playable character I’ve made so far’s blueprint, then that health bar will then only apply to that character and not the other ones I intend to incorporate?

Hopefully, someone will be able to help me out with this particular endeavor.

For something that simple you can add 3 images to a widget’s horizontal box and keep the hit points in an int variable. Player losing/gaining health hides/shows a heart image widget (or changes its colour).

You could call something like this in the widget with health values 0-3:

This will colour the widget based on the int value; you could use white hearts here and alter their colour like so. Not the best setup ever but perhaps it will jump-start something for you. [HR][/HR]
For something more complex, have a look here:

Man, its been far too long since I’ve approached this topic but anyways, since the last time I responded to this topic I’ve made a little progress but I still have a ways to go from getting the heart meter working as intended.

I managed to get the hearts to display on my game project’s HUD but unfortunately in its current state the heart meter doesn’t do anything as I haven’t been able to figure out how to tie the heart meter to my health system I already have in place.

Not helping matters is that when I initially created this topic I forgot to mention some critical details on the heart meter on I wanted to create.

Firstly, I need the heart meter to be upgradable, expanding from the initial three hearts to a total of nine, like this:

And secondly, when the player takes damage I want to swap out the full heart image with a empty one:

My current heart meter allows displaying additional hearts but as I’ve already mentioned I don’t know how to connect it to my current health system.

As for the second issue, all the tutorials I’ve seen so far for heart-based health meters use a health bar-like setup using a single heart image that is modified to indicate damage, as opposed to what I want to do with using two separate images: a full heart & a empty heart, and swapping between the two of them as needed. This setup might seem kind of pedantic but I also wanted to use this setup to also make a collectible display similar to the one in the New Super Mario Bros. games: 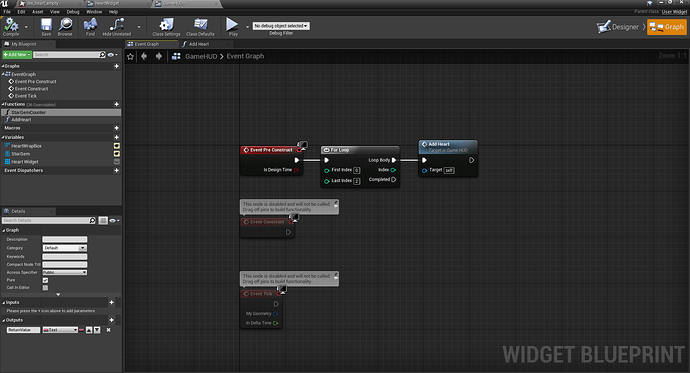 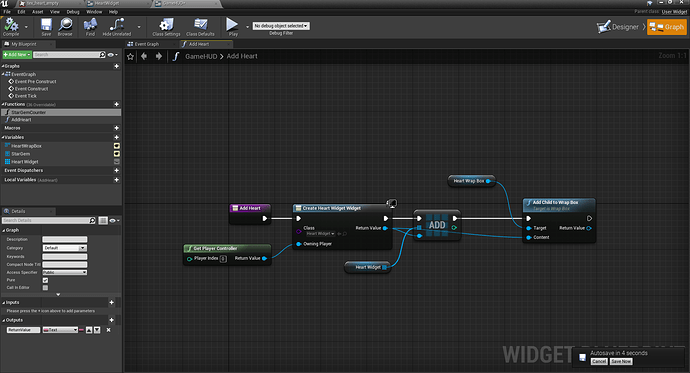 I’d still use what I suggested. Each heart is a seperate widget but rather than changing colours, you’d swap images instead; replacing full

Regarding communication. When you create a widget, ensure you store its reference - this way you easily access it and call events / functions within, updating it.

So I tried following the advice that I got somewhere else as well as your suggestions, which as it turns out are both rather similar in set up but I’ve run into a number of problems.

Meanwhile, in the other blueprint, the other person instead gets a direct reference to the ‘Current Health’ variable connected to the ‘Greater Than’ node. Unfortunately for me though, for some reason I can’t replicate this as trying to ‘Get Current Health’ instead results in this instead:

Not helping matters is that its been a while since I’ve done anything with Unreal so I’ve forgotten a lot about what I’m supposed to do in matters like this.

I tried creating materials with the two heart textures so that I can just use Set Brush from Material. However, I can’t figure out how to properly set them up, as right now the heart materials just appear as black squares. 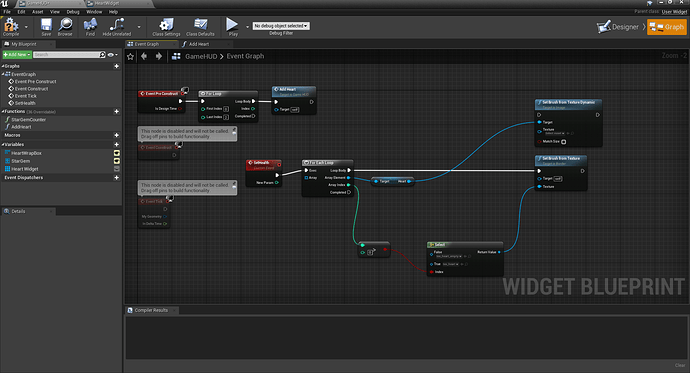 Here’s something a little more complete, hope this will either inspire or, at least, push you in the right direction and clarify some of the communication mechanics between the blueprints: 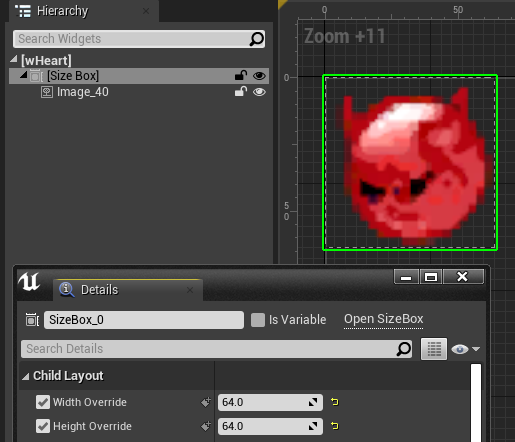 The 1, 2, 3 represent operations on the health pool and would normally be called as the player interacts with the world, here to simulate those evets:

We update the display after they’re called, feeding the widget with a new HP data.

Some things could be optimised better, refactored, wrapped in functions but I tried to keep it all as simple as I could.

! Your solution worked perfectly and now the heart meter actually works. Thanks again for all the effort you put into helping me out and anyone else who wants a similar heart meter.