Having trouble with animation UE5

So i’m new. new new. To creating a game, gave it a try once, hard drive died. Here we are. i am trying to animate a characters walking animation in any given direction, i’ve set up the blend space properly i believe i think the issue is with this? Any thoughts? 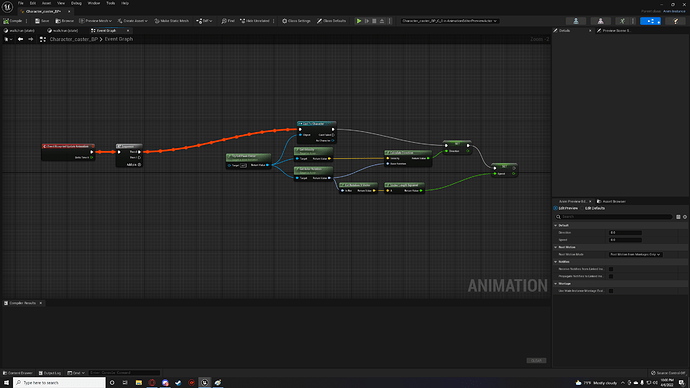 What problem are you having?

Have you pinned logic branch transitioning between that animations from your AnimGraph?

About half way through this video, Andreas sets up a basic character from scratch. i was actualy just watching that but due to all work no play i haven’t gotten to that part yet xD although i would like to figure out the issue with mine rather than copy/pasting from a video, not to say the video is not useful but with my 0.01% of knowladge so far problem solving skills are useful

yep i have no idea what you are saying/referencing (new new new… new) to engines in general.

so looking into your question, i do think the issue is the link between transitioning branches, althought ive checked it over more then a few times and even re-created it twice still no go

Alright i found the issue, aparently on one of my first attempts at this i created some variables and made the lable close to what was the correct labling. so this entire time i’ve been pinging a blank variable… Lables matter! now just need to figure out how to mark this as resolved…