Having some issues with my animation blueprint

So, recently i’ve just finished setting up character movement while referring to one of the documents in the gameplay guide section. Movement blueprints are working as intended, so are all the inputs. But for some reason, one of the animation transitions, particularly the idle_rifle_hip to Walk_BS transition, is unable to be read properly.

Playing in the preview window, the walking animations function just fine, but when i try to crouch, jump or go into a prone state, animations don’t play and instead i get a glitched walking blend space animation.

I’ve checked various times to determine if i have genuinely followed the instructions thoroughly, and yet i still can’t figure out what the the problem is. 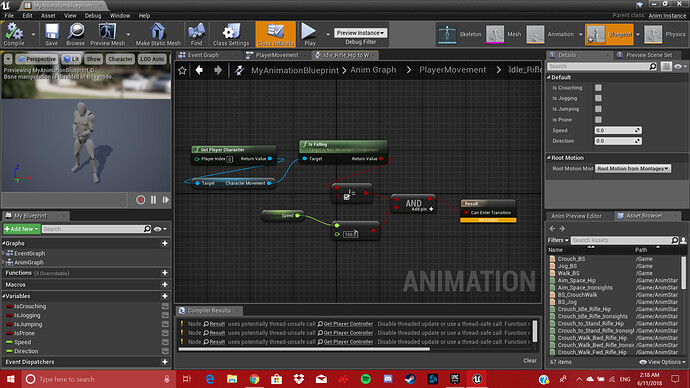 I should also mention i’ve added the animation starter pack to a blank project with starter content.

Alright, done that, but now i seem to be facing some new problems, particularly on the Crouch_BS to Jog_BS transitions and vice versa. I’m a novice by the way, so i’m not entirely confident nor absolutely certain about my abilities to develop assets in UE4. 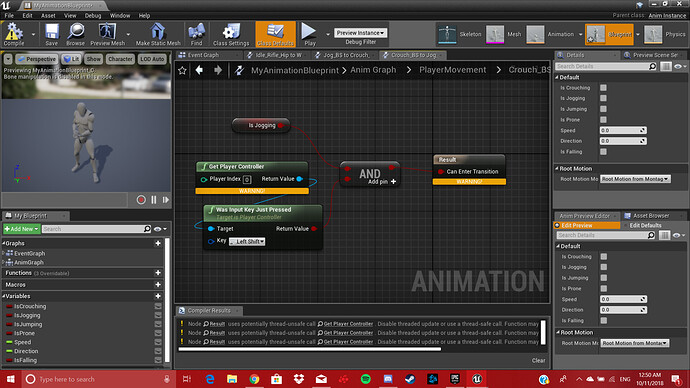 I think it’s the same deal. Don’t try to call your player character or player controller inside a transition rule. Do that kind of stuff in the event graph and set variables based on what you need.

From what I understand the AnimGraph is mainly for dealing with animations and bones, so you only want to call functions that deal directly with those. Functions that call to other classes/BPs should probably be done in the event graph.

Alright. Thanks for the advice. I find it pretty funny how the tutorials provided by Epic don’t always work as intended, especially in later versions of the engine.