Has "Remove from Viewport" been removed in 4.6?

As the question implies, I’ve got no way of removing UMG assets in 4.6 at the moment as it seems Remove from Viewport has been removed (Yes, even when “Context Sensitive” is off).

I’ve tried this in an actor blueprint, UMG, Player Controller and Level Blueprint. Tried using the Compact Blueprint Library, dragging from “Create Widget” and tried from after “Add to Viewport” but the node seems to have completely vanished.

The ‘Remove from Viewport’ node has been replaced with ‘Remove from Parent’ in 4.6 Preview and beyond. Hope that helps!

Could you please update the documentation on UMG Quick Start 1 ? Thank you

I have let the documentation team know that we should update that page to mention the new method in 4.6 (UE-6195). Thanks for pointing that out!

Remove from parent doesn’t work!!!
All button in widget blueprint cannot be removed after click: “Play Game”.
Except I click “Quit Game”, all button is removed.
Something wrong here.

Can you give us some more details on your setup? An image of your UMG graph might be helpful, and any details on what you are trying to achieve and under what circumstances in particular this doesn’t work. Thanks!

Uhm… this is my level BP

This is my UMG: 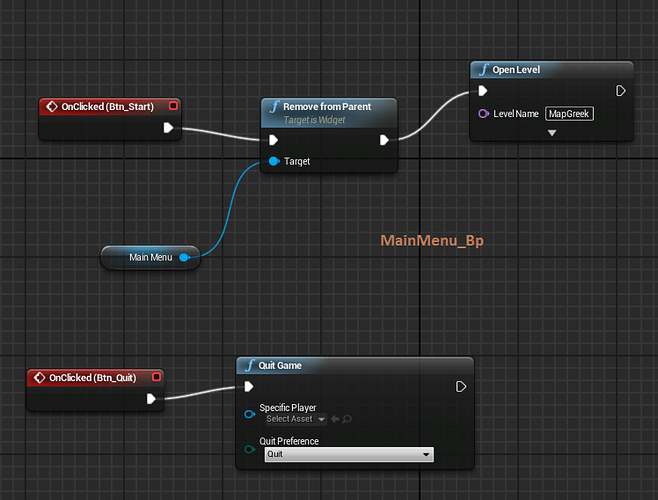 The map for startup is MapGreek and the same one when I called in UMG.
Why does it every time I click to “Play Game”, it always redisplay the UMG?
I want to run MapGreek when button “Play Game” is clicked.
Is there something wrong with my setup?
I called MainMenu_BP as reference object which is named as “MainMenu”

It’s likely that your variable reference to MainMenu_BP, MainMenu, isn’t valid. How and where are you setting that reference? It should work if you just let the Target of the Remove from Parent node be self. 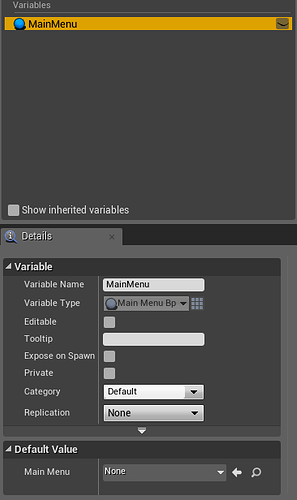 I think I was not wrong.
It is a reference object of MainMenu_Bp.
Is it because I use the same map for Start-up and Open-Level???
Because it is the same.

uhm I already know the answer.
In 4.5 if you point the same map, the UMG will disappear.
But in 4.6, you don’t need to open the same level as it already open.
Just add “Remove From Parent” in Widget blueprint, and it would do the trick.
Thank you for your assistance Ben Halliday.

Additionally, in the image you posted above, you don’t have a Default Value set for your Main Menu variable. You have it set as Type “Main Menu BP”, but that just means it can hold a value of that type. If you want to use this variable, you still need to assign a value to it, just as you would an Integer or Float.

So I think you could still do it the way you were doing it if you wanted, but you’d first need to find a specific reference to the Main Menu BP (using Get All Actors of Class) and then assign it to the Main Menu variable.

Yes, the reason the menu doesn’t disappear is because the Start-up map and the level map have the same name.

Change the startup map on your project settings in the “maps n modes” toggle and it should be fine.

To test it. Try to change the "event Begin play " of your level blue print by any key to see if it works.

I hope it’ll help someone!

Also this tutorial should be updated A new, community-hosted Unreal Engine Wiki - Announcements - Unreal Engine Forums. Many things are outdated