I have been recently working on Shipwreck Project for UT 4. During the process of designing the map I made several models which some of was worth sharing! I updated them to the 4.17; 4.18 and 4.19. Over 110 models, 99 textures and 54 materials available on UE 4 marketplace! 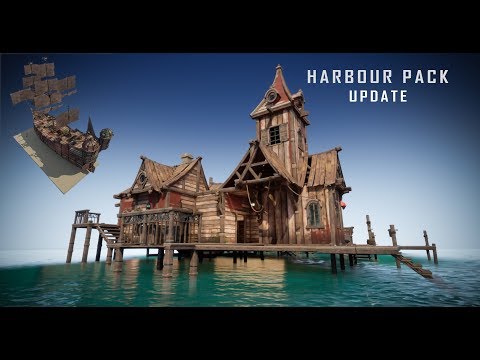 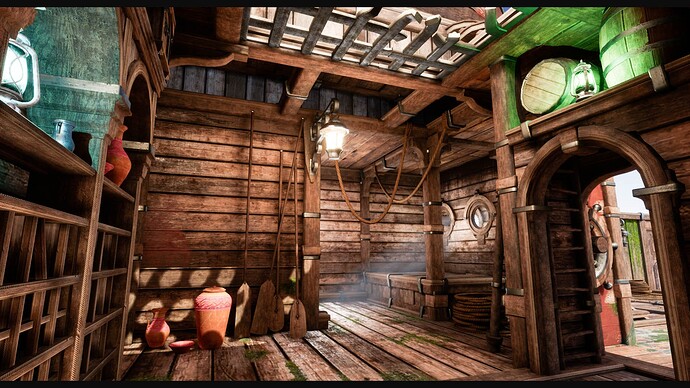 Ps. If you decide to buy the pack: Please share your opinion on the models so I can improve them in the next update!
PPs. Overall I think there were 6 updates of this pack. I am very proud of it!

Thanks man! Your stuff looks cool as well!

Reduced the price of the asset, as I am working on several ship assets: Masts, 4 types of the ship and a few others: 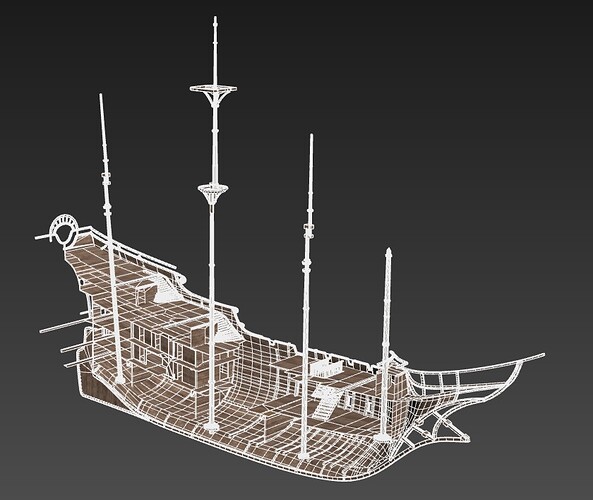 Any feedback/ideas? For example: on how to make ships modular?

Modelling and modelling… Each ship will be divided into three parts which can be swapped and also have their damaged variant.

I think it’s possible, but it will be very complex.

I think your idea of splitting it into front, middle and back pieces is going into the right direction. But I would try to not place masts for example, as these could be placed by the user, making it even more modular. You could also try to seperate the outside faces of each front, middle and back pieces (I mean the side where the canon windows etc. are) from the actual area, where you stand on and walk around. This would increase the modularity even futher.

For each front/middle/back piece you might also want to seperate the upper most level from all interior levels, since you might want to build them differently on the inside.

And I think you should make the tip of the front piece seperate as well. and maybe add a basis for adding statues to the tip.

Aside from that, you could increase the modularity by properly grouping mesh faces together, so that users can apply different materials to different components of the ship, like using different wood materials for frames and planks.

Is this going to become a complementary pack to your modular ship props pack?
I am going to keep an eye on this and buy both packs, if it turns out good

Thanks for the feedback, man. This is very helpful! I did some progress on ship and the models pack itself. I think I will put all of this stuff into one pack unless I end up having houndreds of models. I will be updating the pack in 15-16 days with new content + 4.18 engine update. Here is the snapshot from the WIP on the ‘harbour like’ pack. Since then** I lowered the price of the assets. Its really cheap now!** 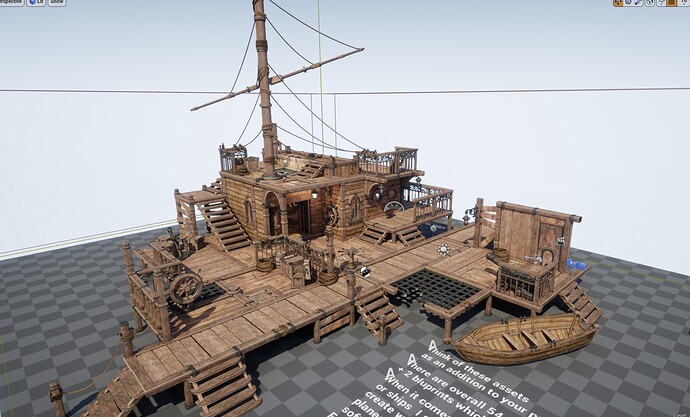 I have one ‘back’ fully finished so far. 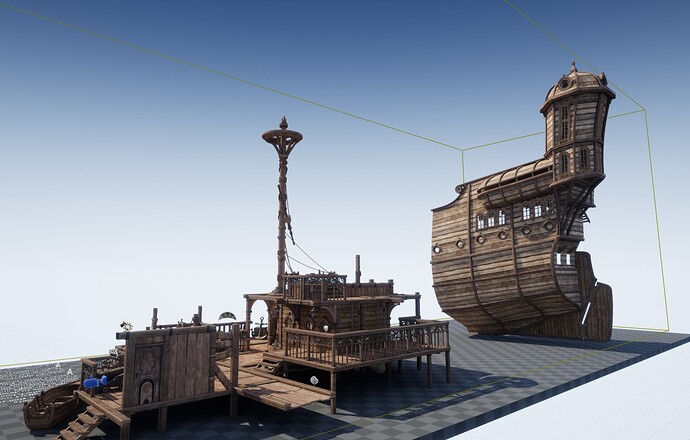 Try dragging images on the empty tab. I don’t understand why they don’t get bigger when you press them.

Update was done three days ago 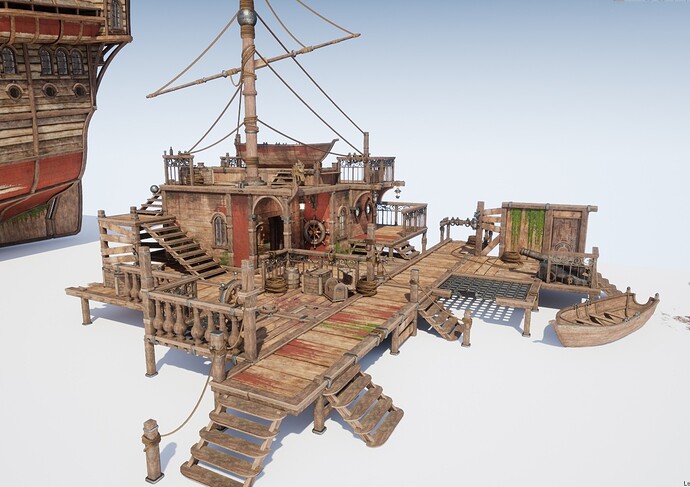 VIDEO:
note that video doesn’t show the new material, that’s why I put a screenshot in this post showing moss and red paint 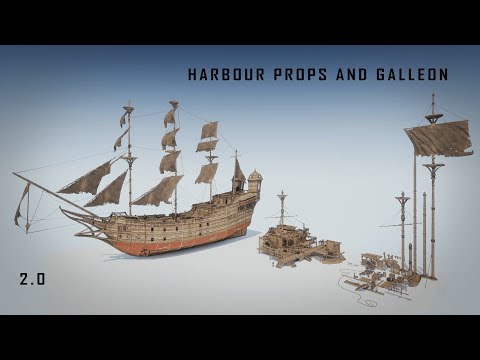 Holy cow, this is one fine ship asset. I think I’m going to buy this very soon.

Updated the whole thing! Here is a video: 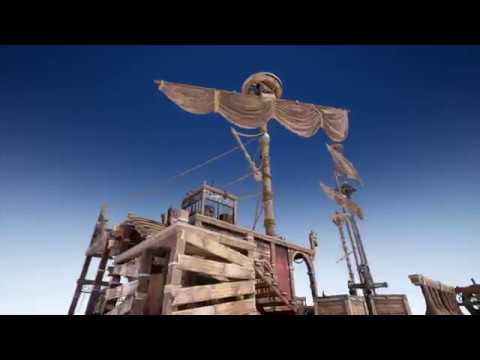 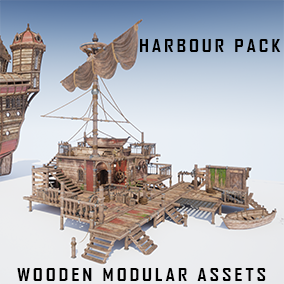 Thank you RYuxq for your support!

Updated! Additional rows (Egyptian, European), metal cup, pottery with Celtic pattern and remastered main wood material - it has a variance for darker/brighter individual planks and I fixed and reorganized some of the nodes so parameters work better. Screenshots:
Outside of the harbour shop 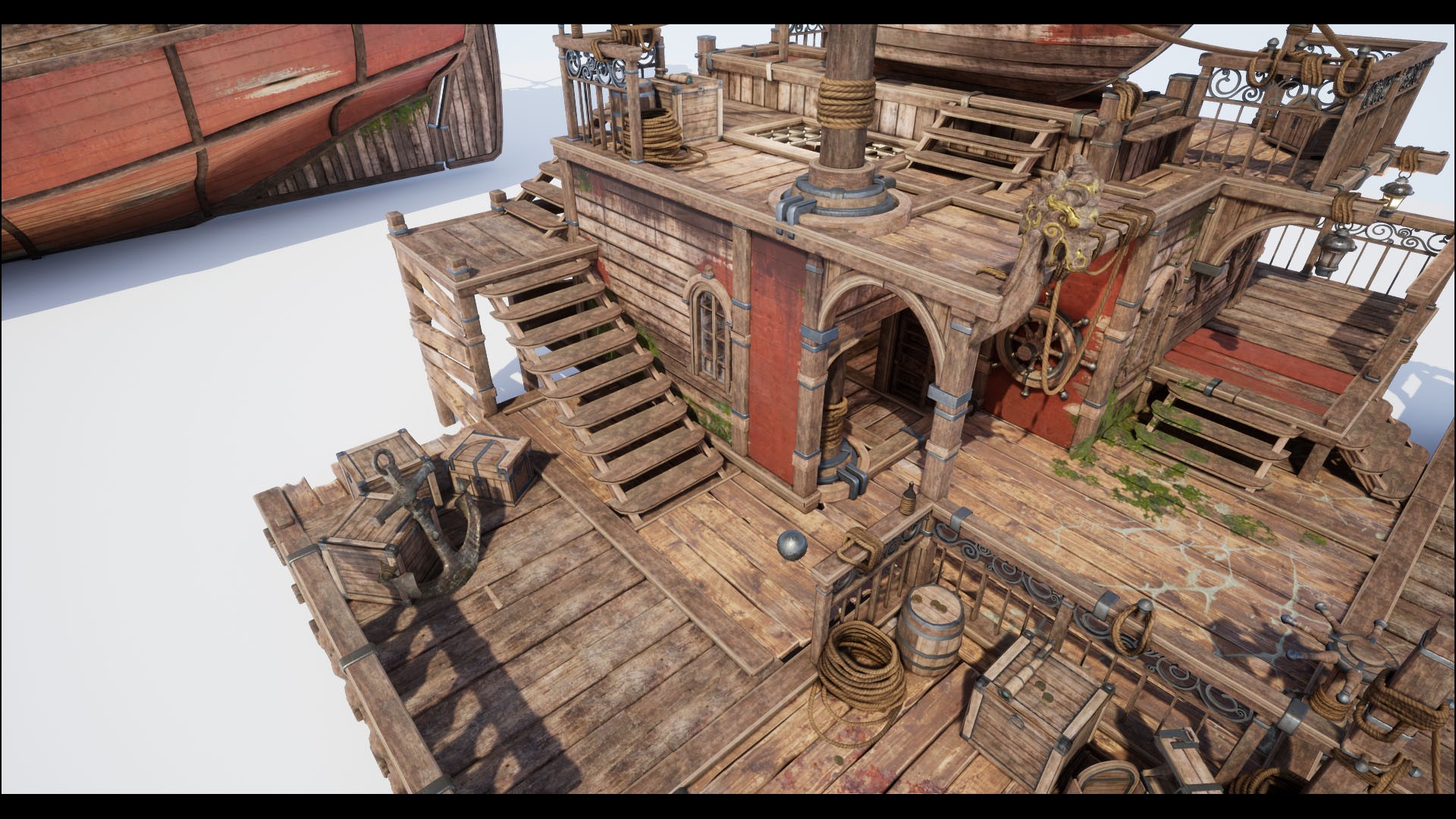 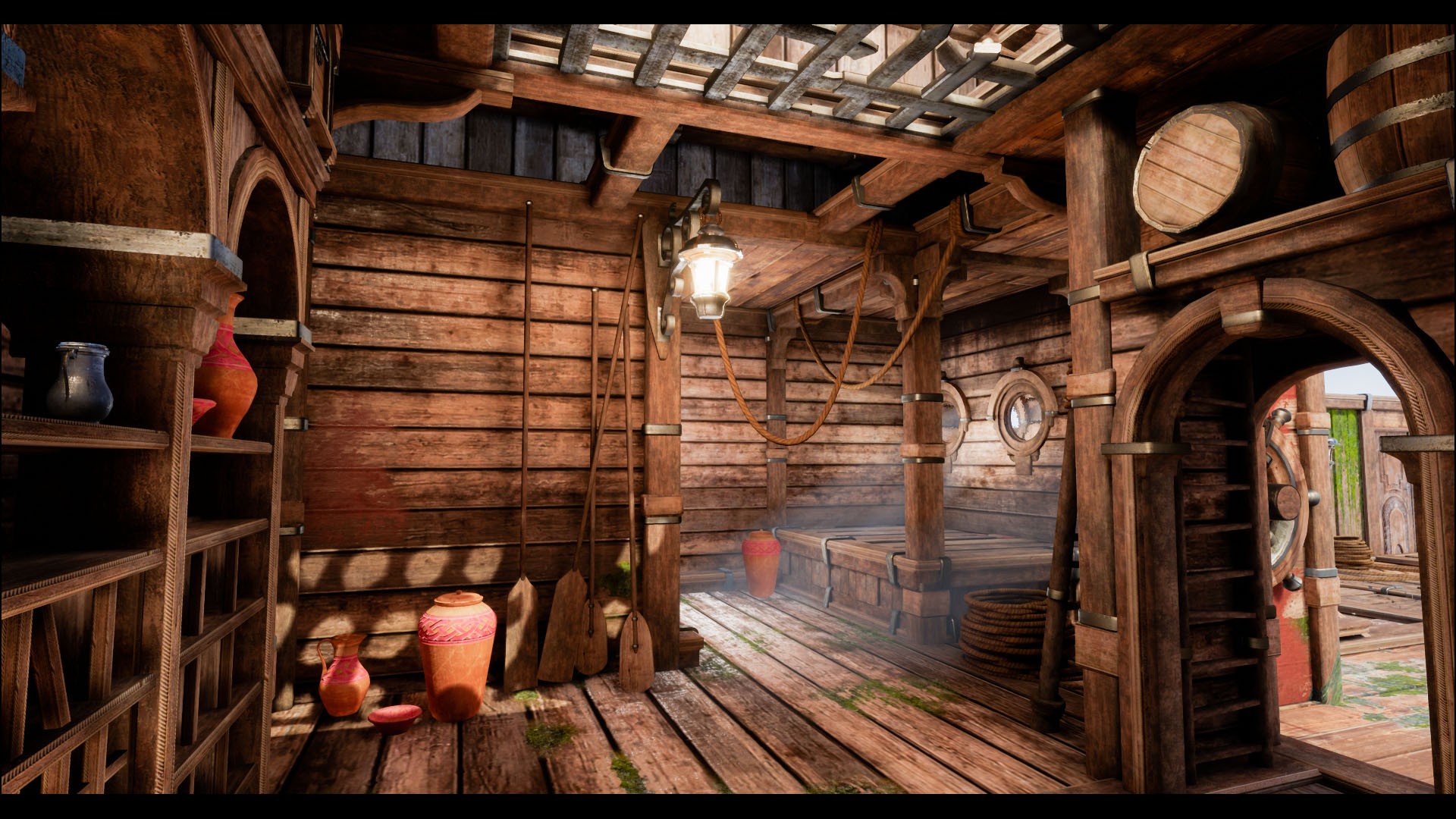 Ship’s deck (you can see how some of the floor planks are darker then others): 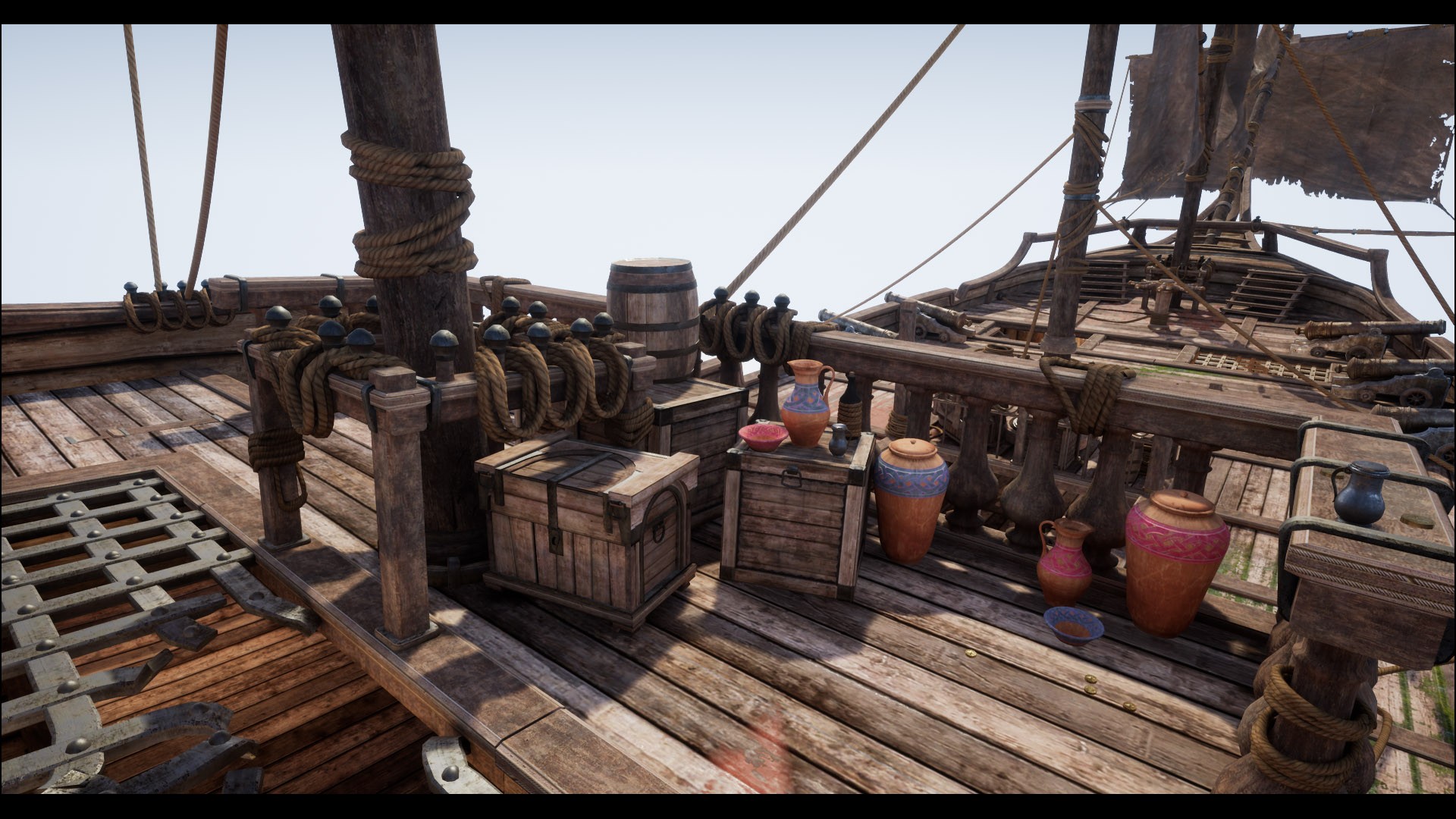 Wow thats really great! I just bought it now ahead of time just to support you, even though I can’t immediately use it. I especially like the colours, even though it looks a little toony. But you might want to consider to lower the contrast between the dark and bright wood colours a little. The variation adds to the realism, but if it’s too much it will look like it has been tempered with, instead of being natural. But I don’t know how to balance it

you are the artist. But I noticed that the contrast might be a little unbalanced after seeing the additional items like the pottery and additional scenes under the deck.

I did exactly that, rYuxq, Thanks for the advice! Thank you, OptimisticMonkey
Here is video of the last update: