It’s probably partially my newness to BTs from FSMs, but I’m having trouble setting up dying and dead “states” to my AI’s behavior tree. When the AI’s health reaches 0, I want to play a dying animation. After the animation’s played, I want the enemy to fade out and delete himself (and the AI controller, weapon, pawn etc…). I could hack this together in the AI controller, but I’m really giving behavior trees a chance. My gut tells me that I should be using behavior trees for this. I appreciate any tips, or examples. I currently set a Blackboard Key ‘Dead = True’ in the AI controller when health <= 0, then “listen” for that Dead key in the BT.

Here’s my behavior tree currently, I’m sure I’m doing it wrong. All of it works fine except for the Dying part. 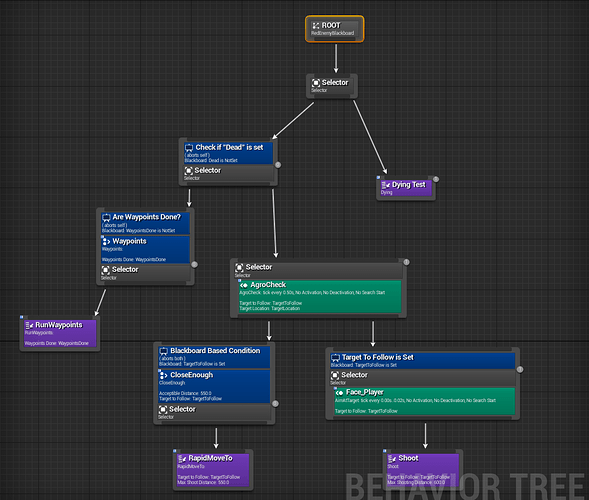 I would do the death in the BP itself. Much easier.

If “Health” =< 0 then “Play Anim Montage” Then “Delay” to allow montage to finish, then “Destroy Actor”

I set that up and it works fine. I just it in the controller. However, the BT keeps going, so while the death animation montage is playing, the AI is still following me around the level. Is there a way to stop the BT before I play the montage?

Figured it out. I changed some stuff up (added a search for player behavior, and a wander behavior). Then I also added a death check, and if it fails that, it goes into the death behavior. 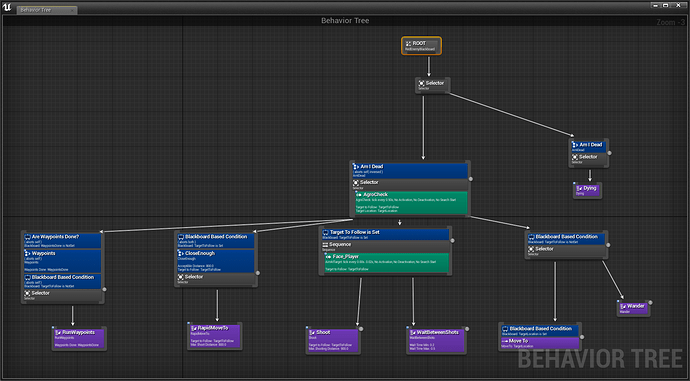 i have the same issue, Can you share more info on how you got this done? I ma new to UE4 and creating Games. So far i have this in BP but player follows me after the montage is done