I’m making a level for college work using Unreal Engine 4. The premise is that you are on the Snowpiercer, which is a train that is 1001 cars long and has been going around the earth for 17 years because of the government’s ploy to help ‘cool down’ the earth’s major cities and thus, accidentally, freezing and killing most of the world’s population. The train has a class system of the end cars being cramped with very little food and controlled by the ahead cars; the further you go through, the higher the class is. The train’s creator and driver is treated as a deity and the engine treated as god. The whole idea of this level is to take 3 of the cars - a portion of the end car, the School and the Bath House; each car will have their own style. The end car will have ragged bedding and ‘bunk-bed’ style sleeping system, it shall have rusted metal parts as well as textures like barrels and piping etc. The School will have childish art on the walls, a couple globes, maps…educational things that you may find in primary/pre-school, it may also have various scattered propaganda as they are taught that people from the end car are worthless and that they are ‘ill’. The Bath House will feature a large glass wall with panel flooring and heated, small pools…try to make it have a ‘relaxing’ atmosphere compare to the end car.

I’ll be noting problems that I WILL have (like collision) as well as showing off source material for the level. To get a better feel for the level and train design, I will be taking screenshots from the movie (which you should watch if you like themes from apocalyptic movies and Bioshock). Snowpiercer is also a movie, so I do not take credit nor intend to take credit for the Idea…I will only be making a example level for college work and not trying to sell it on for my own. The Movie, Snowpiercer, is based on the graphic novel ‘Le Transperceneige’ by Jacques Lob and Jean-Marc Rochette. I am a huge fan of both the movie and graphic novel.

Might want to also mention that this premise is part of a movie.

OOO I forgot about that…I’ll do it now. Thanks for reminding me.

Thinking of this setup you have one big problem: train is just very long linear corridor. That forces your maps or environment into quite boring layouts.

As for collision problem, if this game is not multiplayer, you can avoid whole collision problem by realizing that movement is relative. You can load each car as streamed level.
Car that player currently is in can be stationary, with next and previous car simulating bending. Then you add some moving skybox outside for some cars.
To get that feeling of real train bending on track you can use scaled down spline and just read locations 3 cars ahead and behind, then calculate rotations.

But imo biggest challenge here is making environment that not only looks nice, but is also fun and not repetitive.

Cheers for the good luck man, and because the assignment has requirements, it means I can play around with some possibilities. That skybox tip will be an awesome help. The main problem that I could imagine in the face of narrative is that, for those who haven’t seem the film or read the graphic novels, there is a possibility of players not knowing much about the actually base story and environment in which the train is set.

I’m planning to make a low-poly train exterior with a ‘mountainous’ scenery and, hopefully, some snow/particle effects but just for a short camera scene before the player ‘takes control’ of the non-existent player model haha. Going to try and make the three cars as interesting as I can for the short experience that the levels will last. Going to post a pictorial update next week.

I know it is only a mock-up but it is still progress nonetheless. But it’s a quick map of how I, nearly want the environment to look like. Shall be working on it more during the weekend.

Are you using World Machine or anything similar to create your landscape? If not you should probably give it a try, it will save you a lot of time trying to get really natural looking landscapes by hand. 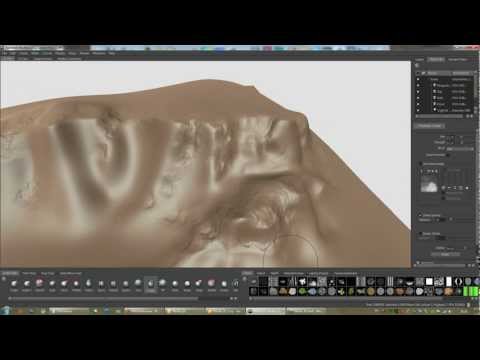 Cheers man…It’s going to be a massive help.

I think the terrain is coming on nicely. Made with UE4’s terrain painter. The train place-holders are just there for now so that i know where to edit terrain where it is needed. I’ll let the feed know if I need help…I probably will.

Because of the massive over-expectation of my skills. The three car level will possibly only be either 1 or 2. There will be not a lot of environment outside, however, i will be trying to get the cars to shake to show movement in the actual car. With a ton of help from peers, I’m thinking this is more possible that what I already planned. Another plan which I had will hopefully turn into another idea that i might decide to do in my own time. 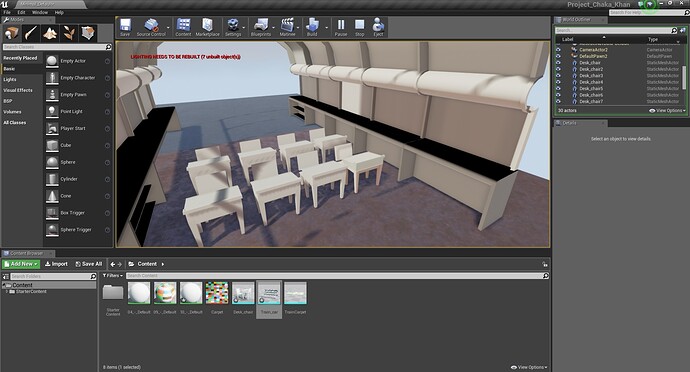 This is now the new project…or at least what I have so far. Please comment with questions if you have them.

Awesome idea!! This is quite different and I haven’t seen many maps in this concept. For the moving sky dome, you don’t have to worry much since if you look at the sky from a moving train, you won’t see much movement in it. This is because of the massive scale of sky relative to the train. But you will have to move the landscape around the train to achieve the sense of motion. Also the closer it is to the train, the faster it will be. I think you don’t even need to have real mesh for landscape. Just fake it using cards if you don’t want the player to get anywhere close to the windows

Untitled.jpg1192×580 147 KB
Texture for the inner shell is done, hopefully will be done with this section tail end of this/next week 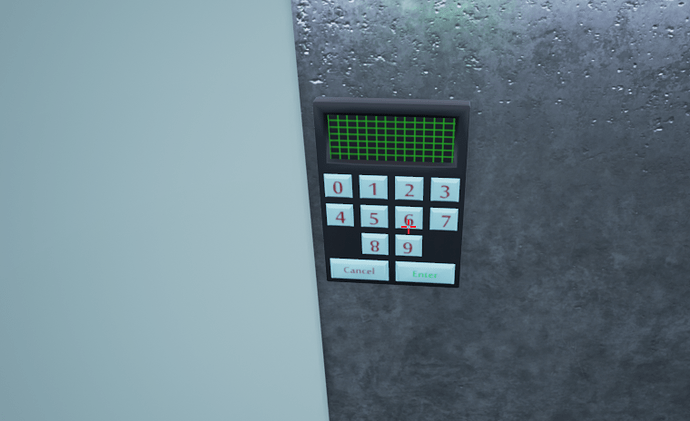 sdgsghj.png760×464 349 KB
I need help with deciding how to blueprint this thing…I would like to have the player select each button with the cursor, however, I would be fine with an interactive UI
JasonDecake April 27, 2015, 1:24pm #18

Untitled.jpg1200×574 164 KB
First room is nearly done…fantastic. Just need to work out a few kinks with the blueprint and get some stuff to fill the space…then create the second room. Wish me luck because it’s starting to get mentally painful.
JasonDecake May 7, 2015, 3:28pm #19

Untitled.jpg1484×668 144 KB
I NEED HELP…I created a timeline to open the door in the level blueprints. However, I need to make it so that when the enter button is pressed (Created with a widget) the door opens, but I can’t get my head around it haha

It seems to open fine but only where the level begins to play. That needs to hopefully change. Any and ALL help is accepted.
TetraClock May 11, 2015, 7:07pm #20