I have some questions regarding PhAT and biped rigs.

When using the “Twists feature”, if I don’t add a Physics Body, the vertex assigned to then doesn’t move…

On the other hand, if I do, I get an undesired behaviour, a body that doesn’t obbey the bone that I think that should “guide and constrain” the floating body behaviour…

I thought that I could “PhAT weld” the bodies to then behave as just one, but this procedure is not valid. 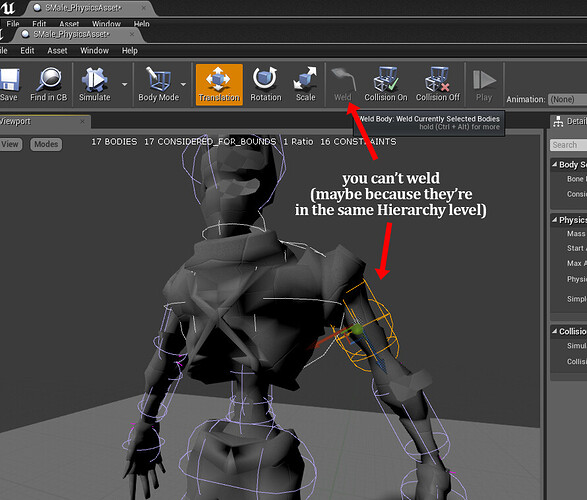 Also I could not “tweak” the hyerarchy on the body setup, since when analyzing the hierarchy trough a FBX-Export+Reimport that converts biped parts to bones we can notice that Twists internaly are just new hyerarchies binded in parallel to the “main one”.

So, since I can’t “child” the Forearm to two parents, I don’t know how to solve this.

1 - On the previous (UDK) SkeletalMeshes pipeline I’ve seen Epic artists using an “overlapped” bone rig above a Biped rig, is this technique described somewhere?
2 - Can I use different skeletons to the same mesh (if I keep the same bone names) to Animations and Physics?
3 - Could PhAT get a way to weld “parallel hyerarched” bones, some sort of “bind to brother”…

4 - Better forget about Biped and do a “crude bone” rig with single hierarchy?

Messed a bit with Schematic View (arranging the skeleton on a single hierarchy) and at least got the “melting” possibility. 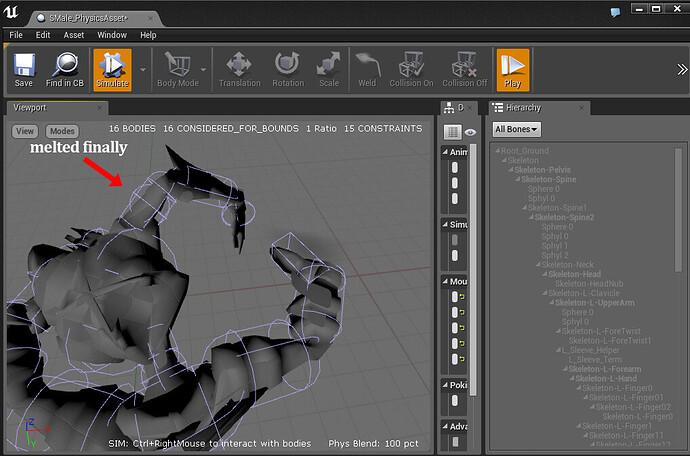 Unfortunatelly, I just figured this trouble now, and used some extra bones instead of just Biped features my skinning is not as good (got some undesired twists).

I’ll now try doing the schematic correction first, reassign the meshes and so watch the results.

not sure if this is any help for you but you don’t have to have a physic box/sphere for ever bone if ones are made you can just delete them.

Well, if I do this is the same as don’t add Physics Bodies to it (first image above).

What’s funny is that Epic “fixed” what doesn’t works well on Biped-Unreal pipeline and throw it on MAYA as that rigging tool (basically the same functionality), so now MAYA users will experience what some of 3dsmax users have been using all these years.

Anyway, now I’m on a P&D to define whatahell I’ll do with my “previous” character production pipeline, the easiest should be simply ignore twists and get some “weird” arm deformations.

Maybe use CAT where I can have better control over the hierarchy, but since I have tons of .bip animations done previously with the old setup, I guess that on retargeting I’ll get weird results.

lol! And I thought that should be a piece of cake upgrade from UDK…

i might be wrong but afaik the physics asset is just used for collision and ragdoll so not really sure why its a problem, i admit that i never skin any verts to the twist bones.
having had another look at the 1st pic it does look weird, it doesn’t even look like any of the arm verts are following the bone

The vertices you see as “static” on the first image don’t move exactly because they are bound to a “Sleeve/Shoulder Helper” that doesn’t rotates on the local X axis (or we can say, on the length one).

Specially on low polycount characters, where you don’t have lots of loops to “disguise by distribution” an upperarm length axis rotation I use this technique to keep sleeves just rotating up<>down and front<>back, this creates less tension on the “troublemaker” shoulder<>upperarm transition and allow faster skinning on this area. Works exactly as the twists from biped and if you check the images from Epic docs, you’ll notice that both Forearm and Upperarm bones are breaked apart exactly on the half (2 “links” on each).

And my trouble on this is that after death or on explosions I’ll let ragdoll solve the character animation.