Getting editor symbols for debugging

I made a post here https://forums.unrealengine.com/showthread.php?107587-error-launching-the-game-in-standalone-mode asking about the error I get when trying to launch on standalone and according to the answers (only one person replied actually) everything in the log file seems to lead back to a certain “UE4Game.pdb” which I looked into and from the few posts that showed up it is is apparently a part of the editor symbols for debugging.
Now for installation/activation process of the editor, the same posts which are a bit old said that it is in the drop down menu on the left of the launcher. Simple enough but there doesn’t seem to be any drop down in there. the only one that exists is the one allowing me to chose which version to launch.

I’d appreciate if someone could explain to me how to install it.

(I haven’t used the launcher in a few weeks)
There was a little drop down arrow added to the top right of the installed engine versions where you can bring up a window where you can specify what components you want to download (Debug symblos, starter content, Etc)

Edit: I would thing the debug symbols are only needed when something crashes, Is that perhaps happening? 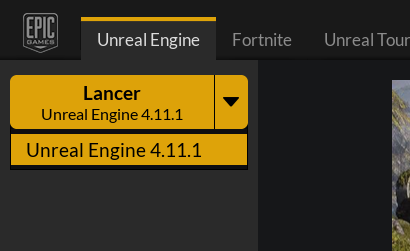 there doesn’t seem to be one for me unfortunately

and yes as I mentioned in the other topic I get an unknown error whenever I try to launch the game on standalone and the UE4Game.pdb file missing appears to be coming from the debug symbols http://www.filedropper.com/nouveaudocumenttexte (link to the log file just in case)

Have you tried restarting the OS(Windows,Linux, Mac)?
I have had a error that was only solved by restarting.

Does the standalone create a log?
Is there anything in the output window of the editor or in the editors log?

Do you have Visual Studio 2015 installed with C++ components?
You could then use that to try and (help) locate the source of the problem, But that probably won’t be easy without debug symbols.

launching the standalone fails when it tries to start the executable.
the log is provided just above

ps: as savagebeasty mentioned in the other link and as seen in the log the following lines are pretty recurrent in the part were errors/warnings start

Do you have any pdb symbols in the win64 binaries folder?
perhaps you could place a dummy text file with the same name as a workaround.

I will probably update the launcher within a weeks time, I could then see if I still have those extra options.

It seams strange that no one else besides the person in your other thread has said anything, Something like seeing if your installed engines in the launcher have the extra download option.

Oh! did I tell you you are a genius? placing a dummy file worked perfectly fine .
Thanks a lot. So that file is somehow required in the directory but not used ? if that’s the case I just hope it won’t need it for real by the time i finish.

You will need the UE4 Game debug symbol for debugging if there is a exception(crash).
So you may have to ask for someone to upload one if that happens, Unless a way is found to have the debug symbols downloaded.

I am glad to be of help

I have updated the launcher, And here is a pic of the drop down showing the options:

And here are the options:

I have updated the launcher, And here is a pic of the drop down showing the options:

And here are the options:

Thanks Ryan20fun, was looking for the symbols as I have EU4 crashing when I try to open a file

Thank you @urumizawa and @ryan20fun You both answered my question that Ive been looking for, for 20 minutes. I’ll chime in with my hand-holding tutorial to keep this post fresh for someone else who needs it