Get Right Vector does not work

That would get the right of his character, not specifically the right direction compared to a 3rd person camera.

To be safe: Instead of manipulating the rotator values directly. I would try doing GetRightVector from the ControlRotation then breaking the vector and remaking it with a 0 in the Z. That way you still have only lateral movement input.

I updated my answer with a screenshot

I am implementing a system like the chisel in God of War. Chisel as a character and in flying movement mode.

What can be the reason for that? 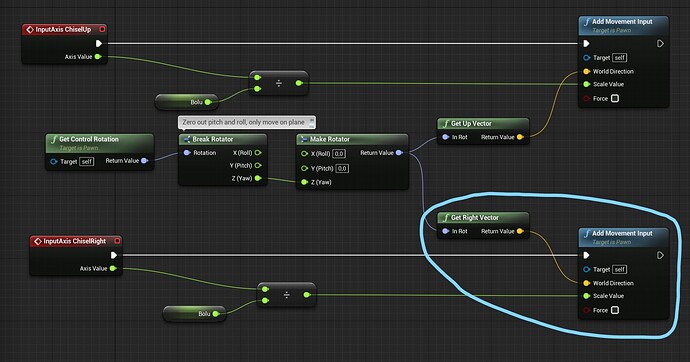 Have you tried taking right vector from the actor?

I have rotated the actor 90 degrees and changed Get Right Vector with Get Forward Vector, it gave the same result.

So I did as in the screenshot, connected Y axis to Get Right Vector, but it didn’t change anything.

It’s hard to know what someone is doing with a character, there are so many place to check and uncheck boxes to do with inheriting and ignoring rotation…

When the chisel is possessed, there is a fixed camera for it, in the level.

I tried everything. No matter what, the chisel only moves in the 0-180 axis within the level regardless of the relative angle. Never to the sides of the map.

Could you please share a screenshot of how it has to be blueprinted?

Even this does not work. Get Actor Up Vector works, Forward works as well, but Right does not. 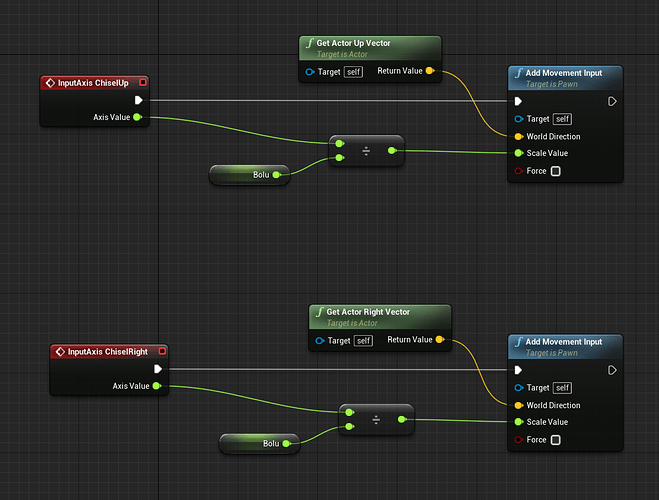 Yeah, we need to know more about your game setup.

Okay, now I did just as in the latest updated screenshot. It didn’t work either.

For some reason, the character is not moving within the level, horizontal in world space.

I tried both with a gamepad and keyboard.

Attaching a screenshot to show better. 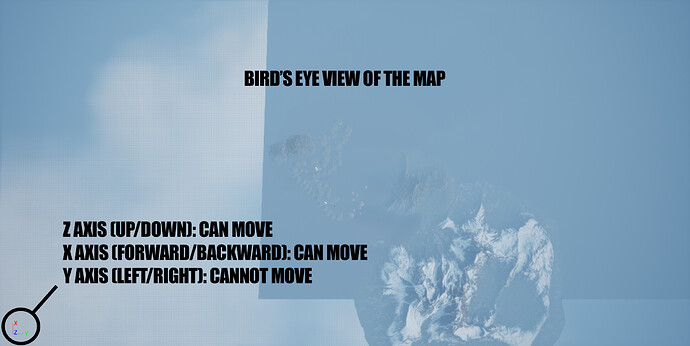 If you make a new empty project, migrate the character to that project, zip it and put it up for download somewhere, I’ll take a look. But apart from that, I’m afraid you’re stuck with reading a lot about character control and vectors.

I’ve put the link on ClockworkOcean’s message. It is a 1st person game, but when interaction with the panel, there is a fixed camera. Please check it out.

However, the chisel (actor) now moves and stops instantly while it used to move smooth because of being in fly movement mode before. If there is a way to make the movement smooth on add actor local offset node, that would help a lot.