this question was often here and some claim to have found a solution, but they haven’t. If an object collided with an instanced static mesh component, the Hit Item in the Hit Result should give the index of the collided instanced static mesh. But it doesn’t, it’s always -1. What am I making wrong?

This seems to work for me. 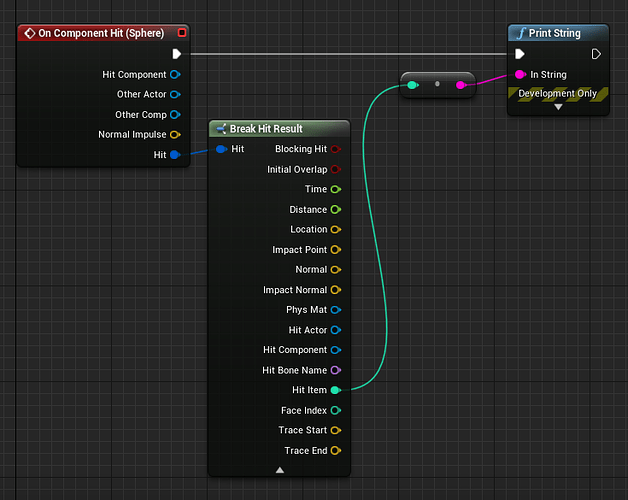 It gives me -1 if I am hitting something that is not part of the instance static mesh.

Which is correct, btw.

The whole point of (hierarchical) instanced static meshes is to be extremely light and performant, they’re not supposed to simulate physics. Their transforms sit in the GPU cache and the CPU does the physics (to simplify it by an order of magnitude!). Update instances’ transforms (even via a batch mode) the benefits are mostly lost at this point.

You can move the component that holds onto the instances free of charge, though, so to speak.

When you collide with the instance, as demonstrated above, get its transform by the provided index, remove and replace it with a physics actor - feed it the transform, give it an impulse bump in the correct direction.

Making games is about cutting corners and faking stuff a lot of time, especially as things grow in scope. Ah, I understand your problem. I had a similar problem before but with skeletal meshes. But it seems that hitresult mainly gives you information about the other object that you hit.

The problem is that my wall should
decide what to do with a brick which
was hit by a gun projectile.

But it’s like I said, the projectile
knows the correct index

What exactly is stopping you from propagating the data from the projectile to the wall actor?

I can solve this by making an (additional) line trace through the wall: