Get Actor reflected in mirror

So I have a scene with a mirror, a character and a monster. I want to be able to do something with the monster when I see it through the mirror, but I encounter a few issues.

Is it possible to detect an actor reflected in the mirror ?

I don’t think so. That’s why I tried to line trace from the character to the mirror, get the view angle and create a BoxTrace from the mirror hit point to the reflected direction (box size = mirror bounds size) and check for the monster. But this has two main limitations:

Do you have any ideas how to handle this properly? 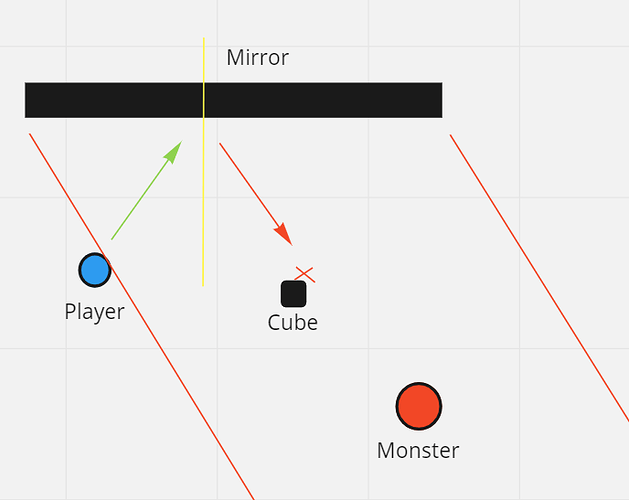 When you say “detect,” what do you mean? Using one of the built-in Unreal AI sensory objects, or using custom code?

You can use a render target, and render the scene to the target from the point of view of the monster, and override materials so that geometry is black, mirror is reflective, and player is green or something. The render target probably only needs to be 128x128 or somesuch small size. Then, check the amount of green in the render target texture. There’s different ways of doing this depending on “where” and “how” you need the data – read-back will stall the pipeline, but perhaps you can use the render target as input to another pass that counts/samples green pixels, or use a stencil test of some sort. Or read it back next frame, so reactions are one frame delayed.

Thank you for your help,
“Detect”: when the player is able to see the monster in the mirror, trigger some action. If possible, it would be basically do some kind of linetrace and check the hit, and do something according to the result.
The render target seems inetresting although I never used it so I need to take a deeper look in the docs. For now I think I will do an approximation and just check if the player is directly looking at the mirror, and do a custom conetrace from the center of the mirror towards the reflected direction.

some kind of linetrace and check the hit

If you want non-glitchy gameplay based on this kind of effect, I think the render target is the way to go, honestly.

I’ll take a look when I have time then. But as I don’t know how it works, I think your solution is very time consuming. By “some kind of linetrace” i meant a synchronous function to get the result during the same frame calculation, but it surely would not be a problem to get the result one frame later.

What I did so far:

There are a lot of approximations in there (not taking into account the height of the mirror, linetraces in approximate positions etc.) but it works well enough.

Also note: If the simulation uses “can player pawn see monster,” but the camera is not first-person, then the simulation may behave differently than the player expects. E g, player-camera sees monster, but player-pawn does not: player will go “huh? I can see it!” And vice versa.

I tried to use Render Targets with stencil buffer, but I’m facing multiple issues:

There are some render counter queries you may be able to use, on the C++ side, but I have not used them myself (only seen them mentioned when reading through the code) so I can’t help with code snippets.
The most straightforward way would be to read back the image and look at it on the CPU; presumably you will read the image from the previously rendered frame, to get some double-buffering going and not stall the pipeline too much.