Description
The plugin abstracts the native platforms API for supported platforms into a single component that can be easily controlled using both Blueprint and C++ in UE4. Multiple Geo Location Components are supported to allow access to location data from many different actors. Location results and their accuracy depend on the platform and device hardware.

When running in the Unreal Editor a set of global functions are included that can set a simulated location for testing and development. 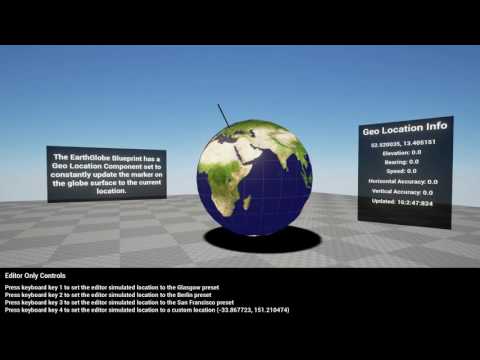 Feel free to ask any questions you might have about this plugin.

The changes included in this release are as follows:

If anyone has any questions about these features, or wishes to request future features they would like to see let me know here, in PMs or via email.

Does this allow to know the compass values too or only GPS coordinates?

I’m using your plugin (maybe I’m using it wrong) and it crashes my project.
I create a new project (4.21.1) and it works fine but when I add the plugin it gives me some errors:

Can you tell me simply which is the blueprint node

that provides me with the local coordinates of, for example, my iPhone or iPad as I move it in my city?