I’m totally geeking out over my own game design – it’s all about the mechanics. Game design is the only thing I enjoy in life. The best part is, I’ve come up with yet another time-wheel, and this one is for the enemies or “mobs” that spawn in the dungeons. I have yet to design the enemies’ stats, but that should come in due time, because a dungeon is supposed to be handled by at least 8 players, and so the enemies need to be strong enough. The game’s not big enough yet, and it’s not complex enough yet. I’m thinking about increasing stats’ cap, then making tiers of armor, and tiers of weapons. Also, the game map does not show where the mountains and bodies of water would be, so, that needs to be upgraded.

In order to add to the complexity, I feel it is appropriate to add a third time-wheel, which will over time change the stats that are increased or reduced by the Directions.

THIS IS NOT A GAME FOR PEOPLE WHO GET ANGRY AT VIDEO GAMES, as players can kill other players and take their equipment, to get the spoils of war.

The whole point of the game, after all, is “going on the warpath”, or, in other words, battling other players.

A player is capable of forming a gang, and other players can join this gang by making a pact, and gangs would have a flag that they can plant in an area of the game map, and this would make it their territory, unless another gang comes and destroys the flag and plants their own. The benefits of having a flag planted in a territory is, that as long as you’re in your territory’s radius, all of your stats will be increased by 1 point. A gang’s maximum limit is 8 players, preventing gangs from becoming too large and too powerful. When players make a pact to join a gang, the pact lasts for several hours, and as long as the pact lasts, the players who are bounded together cannot harm each other, and they can re-pledge the pact at any given time. You can only pledge a pact to one gang at a time.

A player’s bagspace is only four slots, preventing players from hoarding too much equipment.

As you can tell, my graphic design skills are less than average, but these graphs still get the useful information across. This is one tough boss that any number of players can raid, but it’s best to attack it with as few players as possible, because then there’s loot for every team member. The limited amount of loot drops are a preventative measure against raiding parties that are too large, and bosses spawn very rarely. 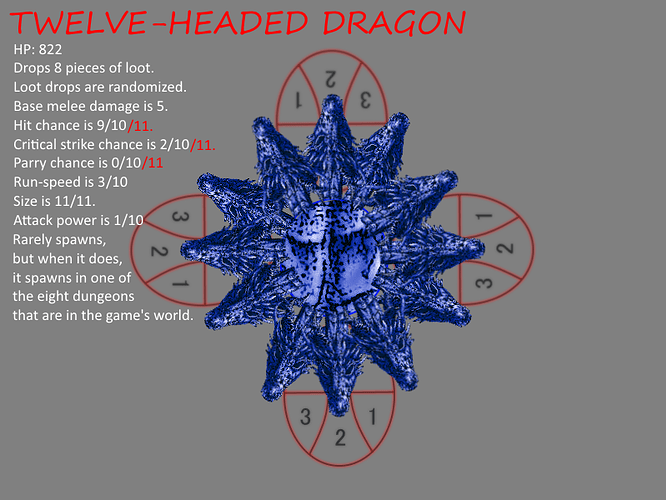 Surely, if a game like Yume Nikki, or Ib, can become cult classics, then a game like this with good design can become popular as well. The game is not about fancy graphics, or atmosphere, or story, or any other fluff. Like Chess, this game’s all about the mechanics.

This is basically the most competitive and ruthless MMORPG.