Good evening everyone.
I wanted to ask a question. Let me start by saying that I am new to the world of video game programming. I created some demos some time ago, but I would like to raise the level of knowledge. I wanted to ask anyone who can give me an explanation on how to create a game with choices that change the ending. An example could be Detroit become human or life is strange. I thank everyone in advance for your attention.

Ps.
I would like to create the blueprint project myself, so I only ask if anyone can show me some documentation or tutorials. I’d rather not have to download additional paid plugins.

I wanted to ask anyone who can give me an explanation on how to create a game with choices that change the ending.

It really, really depends on what you have on your mind: 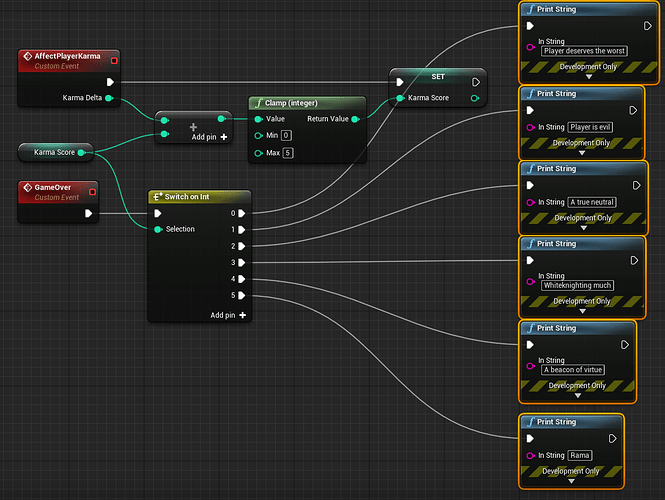 it could be as simple as accumulating points when the story branches and player faces a moral choice. When the game is over, you run an appropriate ending based on said score.

It can be much more complicated than that, ofc. Let’s say the outro sequence comprises of short sequences of the player’s past actions, with additional narrative and different camera angles depending on the choices made.

I doubt there’s a plugin for that. But it sure can be made.

An example could be Detroit become human or life is strange

It’s great to reference a game but imagine there’s someone on the forums that can help with the system you need but never played any of those games. Perhaps you could write half a dozen bullet points detailing your vision.

All those games have illusion of choice, like mass effect had nothing more, they just hide it better that there is no spoon.

To make game where choices matter you need bigger project than weekend one.

Minimal game with choices that kind of matter would be 3 doors and you die different way behind each of them.

I think you just want to make something bigger, not necessary 3rd person rpg, open world with meaningful choices.

So read about design documents, how to write that. And make very minimal for your game (just write down what type of game, what game mechanics you want, setting, artstyle etc. And then write down why all of this will be fun, why people will play it.)

Design documents are more for you than anything else, writing that down will let you se game from outside perspective. So if you are serious about making games (not weekend fun projects) start doing those, remember minimal ones do not spend weeks writing that.