So I just noticed that my game which is now up on Steam, is still called UE4 game even though I specified a name in the Project Settings. Did I miss something that I need to do in order to get the program to register as my own unique title in windows?

Thank you. Yes, it’s all there which is why I’m confused. 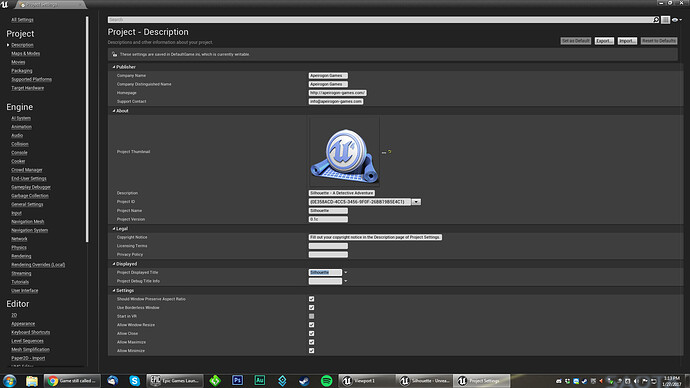 I just verified that the naming convention is working correctly. Make sure that You’ve gone to Project Settings > Description > Displayed and filled out the information.

I believe the issue that you are describing related to the properties of the exe got fixed in #2799 which got included in 4.15.

So I’m actually getting the same results via Steam and the Windows taskbar. The strange part is that when I use Fraps video recorder, it still saves the footage as UE4Game so somewhere it’s still registering the exe name incorrectly.

Possibly? Though my current version of the game is using 4.15 and the file name is still UE4Game when Fraps records a video.

Would it be possible to share some screenshots of your setup and the issue?

Screenshot of my setup is up top. The only issue is the fact that Fraps still sees the game name as “UE4Game” which I thought was weird. Not much to show there in a screen shot, just the name of the avi it records is “UE4GameDATE.avi” so somewhere the name of the file is still being labeled as “UE4Game” instead of the name you specify. As I said, in reply to Samantha, the name of the game on Steam and in the windows taskbar is correct. It’s not a huge issue, just something I wanted to mention.

Let me know if it’s not specific enough to what you’re experiencing.

Yes that does look like it’s the issue. When I followed the steps outlined it does show as UE4Game. Probably the reason why it’s showing that way with Fraps. Thanks!