“A wandering mind’s journey through space and time. A lonesome story craving to be told. A series of lies in desperate struggle for becoming facts”

It began as a one of my endless stories that i so love to write and tell and grew into an experiment in a field of “true” branching narrative. I presented part of it to my good friend and he told me that it would look cool as a “light edition” of one of the Telltales’ games. So we named our duo Storytime Games and decided to “Take it to another level” (c). And on top of it we’ve decided to voice this ourselves as an experiment. A couple of months later i have a finished framework for it (100% BP except the very core of the dialog engine) and we’re currently starting to record all the VO for the prologue. All you can see in the demo is being done by 2 guys in their spare time and since neither of us is a 3d artist we’re heavily lacking assets. There are some placeholders in terms of audio and non of the aspects of the demo represent the quality of the final product so far. Though being minimalistic in terms of environments SHIFT needs some assets that are crucial for the story and gameplay so if you are a 3d artist with a proper skills level that want to participate - you’re welcome to contact me via PM

The game:
SHIFT is a fully voiced interactive story that is taking place in 2 different timelines and places, has 3 characters involved, a prologue, 5 playable chapters and epilogue with a number of endgame decisions. Under the hood SHIFT is a huuuuge dialog with player’s choices and environment interactions acting as triggers for driving the story and events. You play as John Morrow, a space fighter pilot that wakes up after an emergency eject. What happens next is a game of finding out what happened/happens/will happen through environment and dialogues. We’re planning ~3-4 hrs of gameplay per one play (5 if you like environment and will have good time meditating to a scenes and listening to the ambient). In order to see all the outcomes and main character behaviors it will take 3-4 replays since all of the key dialogues allow only one option to be chosen per replay and these choices cross out the corresponding responses options throughout the game all the way to the endgame choices. We’ve want to make a small game intentionally in order to produce the story with no fillers and all the stuff that players will hear and see will bring valuable info about what happened/happens/will happen. As a test we’ve made a very short pre-alpha version that is available below, it contains a nearly non interactive first dialog of the Prologue:

Here’s a video in case you don’t have time for actual play: 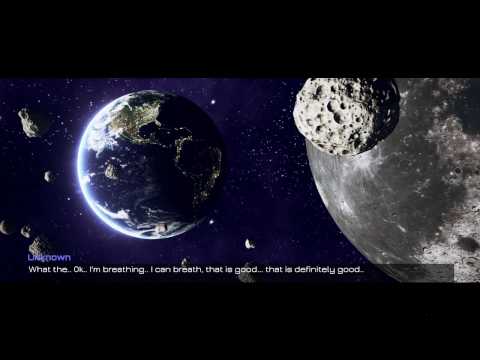 What to expect in the demo:

That’s it for now. Thanks you for reading this and experiencing the game. Please leave your feedback whether it’s positive/negative or just some thoughts on the subject, it’s very important for us to have as much of it as possible

Good luck to you in your project, Roland !

Thanks a lot, we really appreciate the feedback and will try our best to make it a worthy experience )