We are EvilCoGames - a team of 6 passionate developers hailing from Moscow, Russia. For the last 8 or so months we’ve been working on Gravewood High - a stealth horror game with roguelike elements and destructible environments.

We took the mechanics our team loved in rogue-likes, that sense of always seeing something new and unexpected, and added them to a stealth horror foundation. We hope that the resulting experience will be enjoyed by both children and adults.

The game initially started off as an action puzzler, where the goal was to set everything on fire within a given time limit. Even back in the early stages it was fun to mess around with large-scale level destruction. The UE4’s capabilities were really helpful in this regard.

Although running around the level like a madman and yelling “Feuer Frei!” was enjoyable and, and times, hilarious, our team quickly realized that this alone did not make for an engaging enough experience.

Our team brainstormed a few ideas about making the gameplay deeper and in the end, decided to settle on a suggestion that came from a third party (more on that in future posts).

We needed something to add a bit more tension to the already implemented mechanics, so adding hide-and-seek elements felt like the right thing to do. Most players are familiar with the concept back from their yonder years, and we didn’t need to spend a lot of time teaching the new mechanics. The callback to childhood was even stronger when decided to settle on a school building as the main setting of our game.

Destructible environments were kept as core part of gameplay, but we did have to scale them back a bit, since the focus was more on getting through the level while using the environment as a tool, rather than wanton destruction.

And who would the player be hiding against, you may ask?

Our own version of the Big Bad Wolf, of course! That would be the Teacher (the charming guy on the poster above). A madman that is hellbent on catching the player and preventing him/her from finding out the terrible secret of the game. 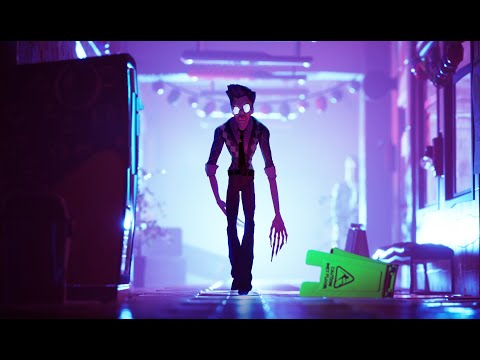 Thanks for reading this article and learning about our project! We will be releasing ’ve just a** public ALPHA on February 27th**, so sign up on the game’s website if you are interested:** https://www.gravewoodhigh.com/**

Since the right lighting is essential to setting the desired mood of your game (especially if you are working on a stealth horror title!), our team decided to share some more information on how we’ve approached this task in Gravewood High.

Lighting in the game is completely built via dynamic light sources since it was impossible to to bake the lightning due to the changing level structure. You read that right - every time the player falls into the hands of the game’s antagonist, the Teacher, the level is rebuilt.

​To make the visuals more convincing, it was decided to fake secondary (bounce) lights with additional light sources and with shadow casting disabled. For example: there is a light source above the window of each room that is directed inside the room in order to create a blue-ish reflection on objects.

We’ve also added an additional light source near the doorways with its level of intensity being dependent on whether the door is open or closed. Thus, when you open the door, the light intensity increases, creating the illusion of having indirect lighting in the room. This effect is clearly seen if the door connects two differently lit spaces.

​We’ve also relied on DistanceField, specificallyDFAO in order to add more volume and contrast to our lighting. DistanceFieldShadows is used to render soft shadows, while VolumetricFog adds more atmosphere to a given scene.

​Combining the tools above has allowed us to create visuals that are both fairly bright and attractive, yet just moody enough to fit the game’s mysterious atmosphere. While working on this stealth horror title, another realization came to mind - trying to competently set-up and adjust lighting in any scene may just turn it into a personal nightmare =)

Thanks for reading this blog post and learning more about Gravewood High! We’ve recently released a **free ALPHA build **of the game. If you are interested in checking out the visuals, sign up via the game’s website and be sure to leave some feedback

It’s time to talk about a very effective mechanic. And we also have great news right at the end of the post;)

One of the most important parts of our game is the level destruction. At the prototyping stage, our team really liked the idea of allowing the player to burn or blow up almost all of the interiors in a given location.

We have retained this feature in the Alpha 1 build, replacing fire with an artifact that smashes through certain walls and objects. Even in a stealth game, destroying something feels fun and meaningful, as long as there are repercussions to such player activity.

To get things working, we’ve used destructible meshes (apex), with the combination of a custom optimization workflow to minimize draw calls.

The reason for doing it this way? Well, the destructible mesh is a child class of a skeleton mesh (skeleton meshes aren’t instanced, which can lead to a large amount of draw calls) and our team wanted to avoid overloading the player’s machine.

A wall blueprint is displayed above. The non-destructible mesh Object (static) is enabled initially. After a collision with an artifact (upon destruction), this mesh is removed, and ObjectDestructibleA (movable) is turned on, which is blown to pieces. And we have ourselves a fully destructible wall.

There are also brick walls present in the game, which only show partial (one might say, superficial) destruction on their surface. The main difference with the previous wall type is that, at the time of destruction, in addition to replacing it with ObjectDestructibleA, ObjectB (static) is also included. This is the “ugly” carcass of the destroyed wall, which remains standing and does not allow the player to go where we don’t want them to go. Such walls surround the location and serve as boundaries for the area in which gameplay takes place.

The single static mesh is changed to movable in order to save resources, since in the destructible version of each wall there are about 80-150 shard meshes with their own geometry. It is better not to draw all of this info all at once, until the destruction process begins. Afterwards, the fragments disappear (after 10 seconds), freeing up memory for the next destruction.

Alpha 1 is available for everyone, you can independently evaluate the work with light and destruction, which we wrote about earlier. As well as other things available thanks to Unreal Engine.

Aаааnd one more exciting piece of news that we are proud to share with everyone - Gravelwood High will be released on the Epic Games Store.

Be sure to add the game to your wishlist and follow the news! Development is progressing fairly rapidly, and our team will be sharing more info about Alpha 2, which is coming sooner than you think

Great mechanics! It gives the game realism and interactivity and of course… more fun!

Recently, our game has crossed two important milestones, which we wanted to share with everyone.

The first piece of news to share is the launch of Alpha 2, which we’ve been working on for quite a while, improving the antagonist’s AI and reworking the level layout. In addition, our art team experimented with the game’s atmosphere by adding more emphasis on traditional horror elements. You can see the changes for yourself in the trailer below:

The Teacher (our antagonist) has gained a new ability, which forces players to be even more alert than usual. New puzzles, new types of cover, as well as previously locked rooms (such as the Teacher’s lair) have also been introduced to the game.

Our team also wanted to experiment with the game’s pace, so at a certain point in the Alpha 2 build, the tables are reversed - it is now the player’s turn to stalk the Teacher and attempt to steal an important artifact under his nose.

The second important event for us was the Halloween update. This is probably one of the most suitable and fun events to handle as developers of a stealth title with horror elements. And although Gravewood High is still under development, we decided to set some time aside in order to update the game build with Halloween-themed decorations and to add a few new challenges for players to enjoy.

The Teacher’s model has also undergone changes - Mr. Hyde has transformed and gained new abilities, roaming the dark corridors in the form of a pumpkin-headed ghost.

The updated game build is available on Steam. The Halloween event will run until the end of this month, so hurry up and join the fun!