**Hello Everyone!
**
**Due to the amount of requests regarding my previous ocean development kits (and the need that seems to exist regarding fluids),
I have decided to return to the UE4 marketplace in order to resurrect this for those interested.
Development has officially commenced and I have re-built my toolkit (still much to be done). **

Currently Completed (but still in need of cleanup):

Not yet worked on:

A Few Quick In-Game Snapshots: (This will be updated through time): 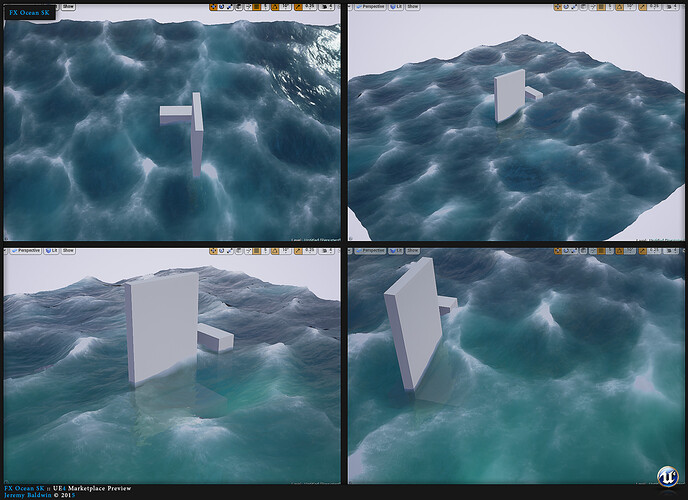 pls show this with a terrain and a few meshes. And get a video working.

pls show this with a terrain and a few meshes. And get a video working.

FINALLY! Your original work on the water shader was awesome - can’t wait for this!

Hey Jeremy, happy to have you back! This looks really cool, and I’m looking forward to seeing how this develops.

One of the things i would love to learn and use in UE4 is to place proper beach shore waves within a system like yours. I really like the look.
If you don’t mind i have a question:
Are you incorporating with this guys [Community Project] WIP Weather & Ocean Water Shader - Work in Progress - Unreal Engine Forums or are you creating another system on your own?
Whatever, it looks promising.

Thanks for the feedback everyone.

@ Kajisan - I am developing my own system (although I believe some of the sources for research are the same).
I am currently re-vamping the entire look. I was not satisfied with the above results and am wanting a much more realistic implementation. Therefore I have scrapped everything accept the wave algorithms and am re-writing all other equations.

My current focus is:

Yea google won’t translate that… What is it, Martian? Seriously though, I’m really excited about this, looking forward to seeing what you come up with

Glad to see you back on the marketplace so I can throw money at you again.
Got a few questions though about this asset in particular -

All that said - Your work is top notch and I look forward to getting my hands on it.

Will you be adding buoyancy support for this kit for things such as Ships, floating debris, or Sea monsters?

This feature will not be added for this specific kit due to project specifications and their implementations. However, saying this, I have built all equations in both HLSL and Nodes so it should be trivial to match buoyancy properties.

Will there be any form of weather support? (Rain, Waterspouts, etc.)

The end goal is to have a full weather support system. How dynamic this is will depend on several factors. Some in-depth features may come in later updates due to time constraints. Some of the weather parameters you can look forward to in the initial release is sky/cloud control (most likely 2D for the first release but would like to build a volumetric 3D cloud system for later release). Rain is another feature, as well as lightning tools and water based particles.

Will there be any form of shoreline based water mesh / Shader that interacts with the main open ocean mesh / shader?

The ocean shader itself will be built to deal with shoreline mechanics. The depth and complexity of these mechanics will most likely be extended in updates. However, the end goal is to fully implement wave arks.

Will we be able to customize our water in terms of how it looks? I personally do not want “realistic water” but this serves as a good basis for what I want to make.

The ocean will be fully customizable in terms of it’s look and rendering. Saying that, the equations I am implementing are geared toward specific behaviors and attributes. Therefore if you would like to create (let’s say) a stylized ocean such as Zelda Windwaker but using this tool, then you could use the functions I have made for items such as Wave Calculations and Angle Thresholds in order to build a stylized ocean very quickly.

I’ll ask the inevitable question: do you have any estimated timeline for submission to marketplace? Which features on your list do you think need to be implemented before submitting?

I’ll ask the inevitable question: do you have any estimated timeline for submission to marketplace? Which features on your list do you think need to be implemented before submitting?

Estimated Time:
I unfortunately can’t say for sure. I am in the middle of moving to a new state for a new job and preparing for other time consuming deadlines. My hope is to get it out as soon as possible, yet not sacrifice quality in the process.

Okay quick followup question based on the fact that I have very little knowledge in ocean/water systems: how well will this run on consoles, given that oceans are often only part of the game’s performance cost?

For example, I’d love to have a beautiful island with an ocean that looks real enough to regularly fool players, but all of that (combined with weather effects and online gameplay) seem to pile into one expensive shopping cart. I’m guessing you’ve done this enough to provide options to turn certain parts of the shader off to save performance, but my question is more about how far you think you can push the shader (with all of your complex algorithms) before someone on consoles has to **consider **turning off those features (in theory)?

Amazing stuff! Really looking forward on how this will develop. Hopefully I will be able to implement buoyancy when it comes out, working with math always scares me :D.

This Engine really needs great and realistic water and 5 $ is just insanely cheap for that promised quality.

Just use the free ocean community thingy :3 It was first!

@ Zooch - This system is built to replicate certain behaviors (performance will not be based for lower end systems). I will implement toggles for the separate features, but further optimization will need to be based upon developer efforts for their specific project. In regards to your question about how far this shader can be pushed until it is too much, I am not sure yet because I haven’t finished all of the equations and their implementations.

@ Nobody - Glad you are interested in the SK (Starter Kit) I am developing. Buoyancy should be trivial, I wouldn’t worry about it too much

@ Kanizitas - That is your choice to use the free ocean tool. It is a great product and a lot of hard work and time has gone into it. To be fair though, in regards to your quote

Just use the free ocean community thingy :3 It was first!

my first quick ocean shader (and promise for a future tool) came 5 months before and was free to the public:

I FINALLY got a bit of time to begin playing around with UE4. What better way than to dive into a fun shader! I am making an ocean shader and have roughed out some of the structural trigonometry and some of the simple physics equations. However,... 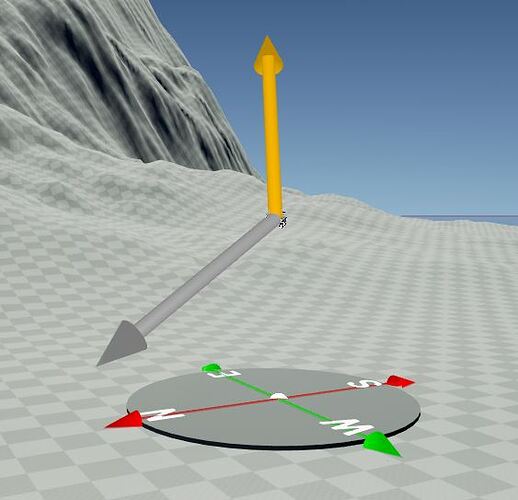 **Welcome to the community created Ocean Simulation, Weather (WIP), and Dynamic TOD system! ** **The point of this project is twofold. First, it aims to provide a realistic ocean water simulation that is both highly customizable, and being as...

one thing UE4 is missing, is a realistic ocean material… good luck