Hello, I have the sword aimset pro, I was wondering if there there is any good tutorials to create an advanced melee combat system in UE4. All help is appreciated. 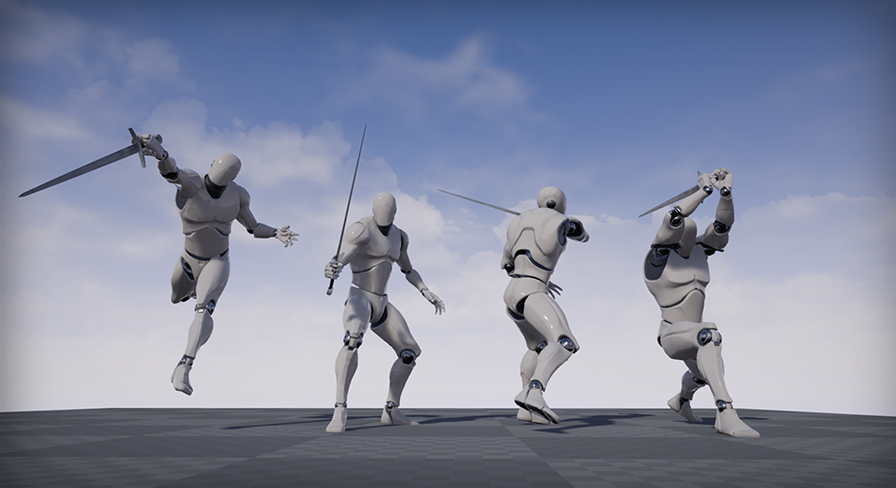 178 motion captured animations for TPP characters armed with a sword

I was going to comment how what you’re asking for is a gargantuan thing but I think the amount of videos in that playlist speaks for itself. And that’s just the basics.

It’s not that massive of a thing per se,
its massive for a beginner.

Start with everything in the website Learn tab. The academy is an excellent source of clear videos you can actually follow.
Once you learn how to use the engine you can come back to us with specific questions we can actually answer.

For a proper combat system you have to learn a lot.
collision channels, interfaces, animation, blueprint communication, widgets. Etc.

Thanks for the help, I’ll start watching those videos

Start small. Build on what you know.

I was going to comment how what you’re asking for is a gargantuan thing but I think the amount of videos in that playlist speaks for itself. And that’s just the basics.

Edit: Whoa it is gargantuan!

Originally, I made a comment about there being videos on other topics by that person. But I didn’t realize that yes, in fact all 104 of the vids in that playlist are on combat. I had seen some of that person’s other videos and just assumed they were all in the same playlist.

This is why my editor has that flashing green light. There’s lots to learn.

I’d also give a word of caution (very much my opinion) on that tutorial series:

While it’s very comprehensive in terms of things a melee combat system can and probably should do in many cases, the actual engineering principles demonstrated in the construction of the system are basically strong enough to get you through the end of the series.

With a system that large and complex, you’ve really got to set yourself up for success in the long term as far as maintenance, modularity, extensibility, etc or the entire thing will fall over after not all much has been built into it.

Of the many available tutorials on basic systems that I’ve seen, Ryan Laley’s are great in that he walks through the basics of building some very common systems, but also demonstrates really solid foundational design patterns in the process. Other tutorials are much more oriented towards the “look I made a thing that looks like it works” kind of mindset.

If you’re a beginner in UE, it’s okay - you can engineer these types of systems without knowing absolutely everything about the engine, but using solid programming paradigms. So if you think “I want all hand weapons to inherit from a parent class that has most of the functionality covered”, this is a good pattern. Then you find a way that’s idiomatic to UE to implement the pattern. When / if UE starts to push back in terms of implementation, you may want to check yourself on the design patterns.

All this to say: it’s very much worth investing the time into solid system architecture and design patterns up front. Think more, code less : ]

Honestly I would suggest the Learn Tab in the Unreal website. This should have everything you are looking for.

[USER=“59397”]the guy[/USER] above arguing that you should use OOP.
Dhu.
If the tutorial series does not, then it is obvious trash.