From Metahuman to Marvelous Designer

I´m trying to find the best workflow to send an animated Metahuman to Marvelous Designer, dress this Metahuman, and send back animated cloth to Unreal.

In my first attempt, it worked, but I had to export animation directly from the animation asset. Then, I imported in Blender to include a T-Pose, because of cloth simulation in MD. And then, export in Alembic file to import in Marvelous.

This time, I´m trying something a bit different: inside Sequencer, I have T-Pose blending to the animation. I´d like to export this entire animation to FBX or Alembic. Is it possible to transform this Sequence into an animation asset, so I can export it?

I´m following this path because, after simulating cloth in Marvelous, I want to export the entire animation back to Unreal, so I imagine the cloth will fit the Metahuman.

Do you, guys, know a better workflow for that?

you can still export as an fbx tho. @Thiago.Unreal Thank you, man. I tried that with Metahuman, but it´s not working. If I disable the original animations or delete them, the newly baked keyframes have no effect. And after the baking process, the body and the head change their position. And the head changes its position in relation to the body, as an offset… 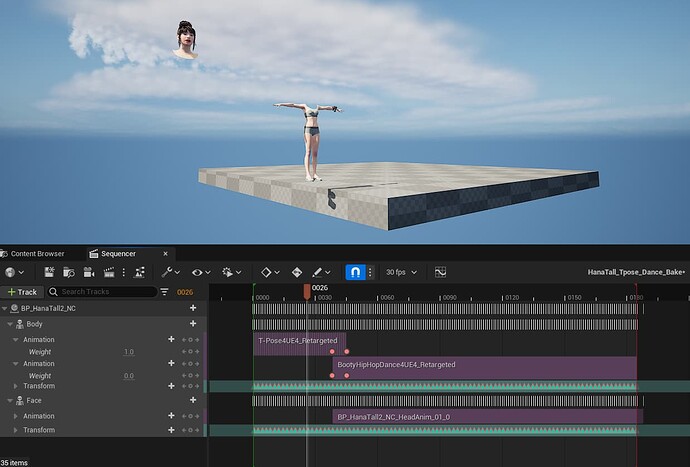 After you bake it you should remove or mute those animations because now you have animation on top of animation. I think that might be the issue

I did this, and it didn´t work. But I found this tutorial: HOW TO import Marvelous Designer clothes for a MetaHuman (UE5 SOLUTION) - YouTube
I´m studying it.

Hummm I just thought of a possible solution: export to Blender, combine both animations in it and import again inside Unreal. I´ll try it.