FPS Significantly drops when looking at a blueprint

So I have a solid 70+ FPS throughout anywhere in my level, but one place. Here’s a quick picture:

As you can see there’s a pit in front of the player. This is when the FPS drop happens, when you stand above and look in. Like this: 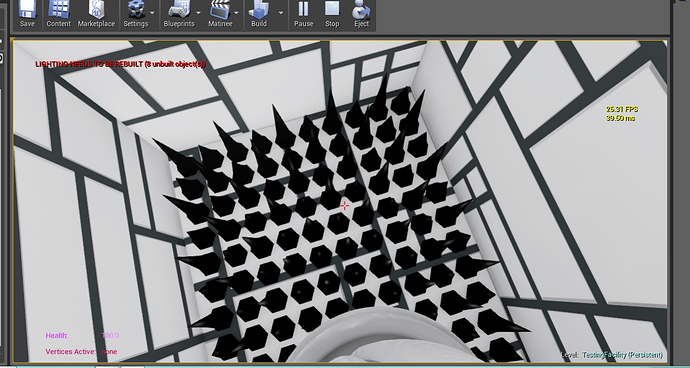 As you can see the FPS significantly drops. Why does this happen?
I followed the construction script/ blueprint tutorial from the unreal engine channel, where you make a marker that’s a vector and then your selected mesh tiles to it. Here’s a quick picture of my construction script.

How can I fix this??

I have a similar blueprint in my test bed but I can’t get your results. Do you mind posting a link for us to download the .uasset of that blueprint to test in-house? If you aren’t comfortable with that, feel free to sent it by private message directly to me over the Forums.

Also, which version of the editor are you using?

4.6.1 and here is the .uasset file and accompanying mesh.

This probably happens because unreal engine is preparing for that script to be used. Depending on the complexity of the script, it is probably based on that.

I dont think its because of the scripts complexity. There isnt too many nodes: in the event graph there is a damge applier. And in the construction script i followed one of the official ue4 tutorials, and all it does is place meshes in the scene based on a marker. Ill see what TJ says and then based on that maybe I’ll find a fix to this.

Any luck with finding the cause of this?

I’m sorry it’s been a few days, but I’m still investigating the issue. I was able to duplicate what you are seeing but I’m unsure why the blueprint causes an FPS drop but the same amount of static meshes doesn’t.

I’ll post again as soon as I have something for you.

I’ve entered this as JIRA UE-7363 in our tracking software. Our developers will be investigating it further.

As a workaround (and maybe best practice) try using an ‘Instance Mesh’ instead of a ‘Static Mesh’. I tested this and there is little to no FPS drop.

Did you try setting the static mesh component you add in the BP to ‘static’? This is the default for meshes added to a level, but in a BP meshes default to ‘movable’, which is more common in a BP, but also has some performance overhead. You should also keep your eyes open for any ‘lighting needs to be rebuilt’ warnings - viewing the level after you have placed static meshes but not built lighting is not really an accurate representation.

Itwas previously set to movable, so after setting it to static, nothing much changed

Did you make sure to not only changed the component to movable but also the ‘Add StaticMesh’ node as well?

If you would like, feel free to send me a link by private message on the forums with a link to download your project and I’ll take a look.

Thanks! This fixed it, I also had to rebuilt lighting for it to take effect.