Whenever I start the game it self replicates this file untill it crashes. It fills up my RAM, hits network speed limit and bumps hdd usage to 100%.
Should I uninstall EGL and redownload everything? Is there a better solution? A working one?
This problem appeared today after I downloaded update V1.9.1. 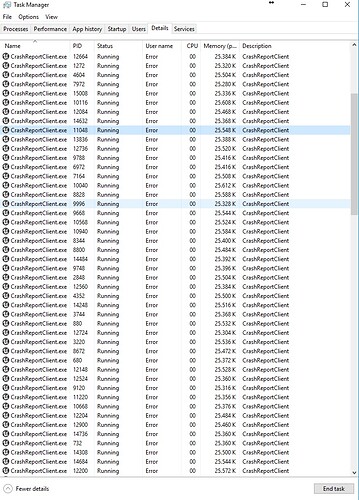 Hi i had the same problem and was trying to fix it for hours. What i did is uninstall all Microsoft Visual C++ Redistributable form Programs and Features and Fortnight is working now. Next step is to detect the Redistributable that is making this problem.

I managed to fix it by editing the config file in CrashReportClient folder. I changed everything from “true” to “false”

If anyone else has this problem just go to Fortnite/Engine/Programs/CrashReportClient/Config open the file called DefaultEngine with Notepad and edit everything to say false. I also changed UIInitRetryCount=10 to UIInitRetryCount=1

Here’s what it looks like. CrashReportClient doesnt even try to run. It’s probably just a piece of software that report all your game crashes to Epic. So I see no harm in disabling it.

nope still not fixed… it worked the first time I ran the game. Game actually worked better than EVER before! But it’s back to old same replicating bug… I’ll try my Visual C++ options

EDIT #3
It seems like playing around with CrashReportClient file does the trick, I changed few things around again and now it’s working