I tried a lot of tutorials. Looks like it’s impossible (but I know it’s possible on UE4). I am almost giving up (but I will try again and again). It is not necessary, but the game would be much better if the foot were on the ground. Doesn’t need to be perfect, just good enough.

The only tutorial that worked for me was one I found here on UE forums, but it use the original UE4 skeleton and I’m using Mixamo’s skeleton, but I made modifications because me and my brother added root motion (and it’s working).
I was able to make the “line trace by channel” from the foot to the ground and made everything on the Character Blue Print, but on the Animation BP it doesn’t work. The line hit the ground, and after that there is a green line. It’s all right.
But the foot is never fixed on the ground and it move with the idle animation, like it’s floating in the air (next to the ground). I don’t know too much about the “IK” and “Fabrik”. It’s something new for me.

It is very difficult to find good tutorials, and those I found didn’t work me.

Might not be much help, but you can utilize foot sockets instead of ik bones.
This product uses this method, if you look on his tutorial links it explains some of the logic: 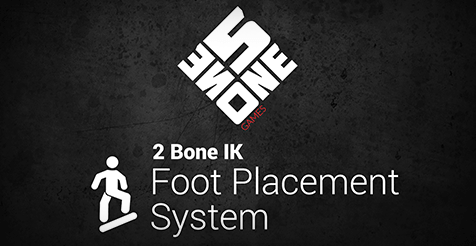 Keep your feet on the ground! This component will do just that by doing a line trace from each foot. It also adjusts the hip down if needed to allow the feet to touch the ground.

The most common reason a player floats off the ground is because the main mesh, the one that all other elements inherent from, fits to tight inside the movement component capsule with in the character BP. The most common thinking seems to be that the character model needs to fit with in the capsule but because the top and bottom are curved when the player is spawned the feet will align with the bottom edge of the capsule as an offset.

Changing the animation will not fix the problem.

To fix the problem lower the main component so the the soles of the feet extends just below the capsule and adjust as needed until the feet are on the ground.

I have done a series of tutorials on IK foot placement with unreal engine 4. For this, I have used LegIK node in animation blueprint and some ground tracings to determine the ground hit position
Here is a the link if anyone is looking for that
https://youtu.be/kK9rQzbSzio

I have done a series of tutorials on IK foot placement with unreal engine 4. For this, I have used LegIK node in animation blueprint and some ground tracings to determine the ground hit position
Here is a the link if anyone is looking for that
https://youtu.be/kK9rQzbSzio

Thank you very much for the tutorial! I will watch it tomorrow and will try it.