Dear Friends at Epic (And most likely Josh

With Josh’s help I finally got the steam instance of online subsystem!

I did a call to GetSteamAppId()

and it returned the default Epic app id

not the one I am using in my config files

and the one that is stored in the steam_appid.txt in my binaries

is that expected behavior?

in my config file and in the steam_appid.txt I am using 480

but see pic below for what I am getting returned when I do: 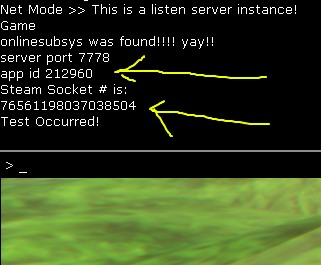 Can you clarify where you are placing the code that returns the app ID? Thanks.

I am not replacing the steam app ID within my code base at all,

I am only changing the steam app ID within my config file: DefaultEngine.ini, as posted in the first post

The purpose of this thread is to indicate that the UE4 steam code does not seem to draw the steam id from the config file, and instead seems to get the app ID internally somewhere.

and the config file DefaultEngine.ini

with the goal of a developer being able to set her/his own unique AppID just in the .ini file and have that be returned by GetSteamAppId().

I was actually asking about the implementation of the code for

But that’s fine, we have the information we need. Thanks

Thank you for the information. We have reproduced the issue and it is under investigation.

Great to hear from you Stephen!