Hello!
I’m new to UE4’s character animations setup and I fail to understand some very basic things. (Possibly becouse I have very limited experience with programming, but I want to learn!)

I am aiming to create a smooth playable character animation setup for a quadruped. In my current plan it will include hand made transition animations and some blend setups. But I can’t for the life of me figure out to acquire a smooth transition between all of them.

Let me explain the animations I have.

Since my transition animations aren’t a loop my state machine looks like this.

I have the Run animations + Lean animations set up in a blend space. So they blend perfectly to each other. But cause my transition animations aren’t affected by those lean animations it causes a hitch in the animation if the characters starts moving while turning. I hope I am explaining this well enough.

What I basically want is that all of the animations except idle is affected by the lean animations. But I can’t figure out how to do that because only loops seems to work with blend spaces, and I want to keep the transition animations.

I’ve heard about additive poses that can be layered upon any animation in order to slightly alter them. They were using that for Far Cry 4 in order to make their wildlife act more naturally against their environment. Like changing the center of gravity when walking up or down a slope. I don’t know if that is possible in Unreal though, but that would be wonderful.

To give a better vision of what I want to create look at this video of the Trask mount from WildStar. More specifically when it is running around in a circle. https://www.youtube.com/watch?v=9lXnTT-IB2U
I basically want to recreate those fluid movements. It has a good transition from run to stop as well.
Here are two pictures that highly represents the two animations I have. Left: Normal run. Right: Run and leaning into turn. 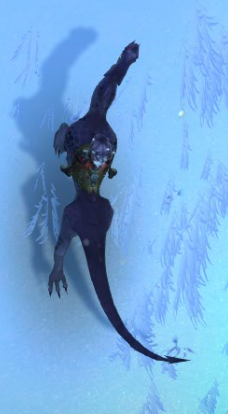