First off, this is an amazing tool! The ability to create a believable human character with full facial and body rig is incredible. The current toolset within the app shows so much promise but there are a few nagging limitations which are holding it back from its potential greatness.

My biggest complaint is that when exporting to UE, the A-pose that’s created is not aligned with the UE4 Mannequin. The Pose Asset provided in the example project works fine to align the Male Normal Weight model for retargeting, but there is no asset provided for aligning the female. This requires making a custom pose by trial and error to fix some bad hand alignment issues, and some minor ones with the feet. I know we’re all artists here, but this seems like an unnecessary step when it could be built into the exporter. I’m hoping this is something that’s in the works, given that MHC is touted as being made to work hand in hand with UE4. In the mean time I’ve made a pose that works well enough for the female model to be retargeted with any mannequin poses, and I’ve had success making a playable female character blueprint with Advanced Locomotion.

The current face sculpting seems to be pretty loose and unpredictable. We can get a generic face pretty quickly, but it takes a lot of fighting between controls to get a passable likeness if you’re designing a specific face. I think the ability to optionally weight the influence/strength of the handles would be beneficial. For example, with the nose bridge control it should be possible to create a pronounced bump and move it up and down without lengthening the entire nose. It would also be good to be able to exaggerate features a bit more to reach the real world limits of human appearance. 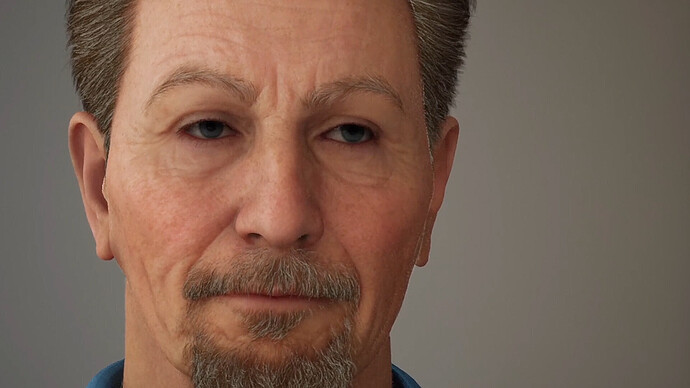 Here’s a test that I’ve done, targeting a recognizable actor. I was only able to get so far, due to limitations in the nose and ear controls. Ears play such a huge part in the look of a face, but currently the ear controls seem to have a mind of their own, changing the size and shape of the entire ear automatically based on its position on the head. I found it impossible to get Gary Oldman’s characteristic drooping lobes, while keeping the ears at the correct height. I also couldn’t get the nose to be both the right shape and the right length. Those two properties seemed to fight each other.

Eye shape was another severe limitation. Mr. Oldman’s eyes have a slight downward droop that I was unable to replicate. I think this is a major cause of the sameness some people have noticed in the faces–everyone has almond shaped eyes, almost like it’s one person wearing different masks. We need the ability to droop or tilt the inside/outside edges of the eyes. Also, a control for narrowing the chin is a must.

Skin texture currently seems to be a convolution of types, which is good, there is a wide variety available. But often once I found the right complexion, I wanted to simply decrease the strength of the wrinkles (normals). This is not possible without choosing a totally different skin type, and therefore losing the specific creases.

Hair, skin, and eye colors are all currently dependent on Melanin strength. An RGB override or tint color on each of these would be fantastic for creating more unnatural but common make up effects.

The ability to limit freckles to an area, to replicate birth marks or a more subtle scattering of freckles over the upper cheeks, similar to the skin color accents would be useful.

Lastly, I guess I’ll be the 10000th person to ask for more body types, or a body editor.

Overall, I am having a blast building a photoreal version of my main character. I think this tool is going to be a godsend for many creators.

I really, really wish there was a way I could give my character dyed pink hair

For now you should be able to use white or blond, and modify the hair shader in UE…but yeah, with the number of people out there having non-natural hair colors, this should at least be a makeup option.

Just played with it for the first time yesterday and agree with some of the points you have concerning ‘sameness’.

The impression that I got from metahuman, initially, was that of diversity.
i.e. Asian, Black, Caucasian male/female models

However, with ALL races, there is kind of a ‘stock’ look that you can achieve.
(Not going to get Jackie Chan, Morgan Freeman… though someone on youtube gave a shot at it… etc]

All the Caucasian Female noses, and face shapes, are really kinda similar.
Not quite as noticeable due to ‘artificial’ differences (hair color, style, etc] -
… but very obvious once you try to add three people to blend between.

End of the day - its an excellent app to quickly crank out high fidelity characters for your game/movie - but, until you can, [without going to Maya, etc], actually have diversity… it will be limited.

Hairstyles - that is another thing… basic ‘normal’ hairstyles for women are not in there.
Now, I realize this is early access, and it was all our guess that this would definitely come later.

Someone, in another thread, mentioned outfits…
It was said MarketPlace would have it - but it does seem that it would work better to have its own Marketplace as you ‘build’ your character… [but, perhaps, it may not really be that feasible]

Give customization of clothes [fantasy, period, etc], and hairstyles [Conan Exiles has more in it] lol!
And you have something you can really easily use for your game/movie.
Combine that with what will be UE5, and we have the potential to really have a creation tool for artistic expression by those not that ‘tech’ savvy. [for better or worse, visually, but it all balances out]

I just wish that Metahuman could be more sims like when it comes to sculpting the face. For instance, making the eyes bigger, eyebrows flatter, mouth up/downturned, even editing the eyelids would be cool. These small details really change the way ones face looks. I did like the way you could change the alignment of the teeth, if only everything could be more like that, than this tool would really blow up.

That’s one of the biggest limitations holding the program back I feel. The eyes, nose and mouth are the greatest factors in what influences a persons unique look. The current sculpting limitations in the program inhibit the ability to make those features unique. Everyone ends up looking related to one another even with the subtle differences with the skin complexions.

Currently the only way around this is to export the model to zbrush to sculpt (can’t even do it in Maya as it gives non manifold geometry errors) and then use that sculpt as a base as you manually add over 50 or so blend spaces to your new model. Ideally you could create a blendspace with the new proportions and add it to the original model, then add each morph one by one with the new sculpt morph target set to 1. However the vertex order is likely to be ruined from exporting it from zBrush, and if you’re using Maya (again) good luck getting the transfer vertex order to work without hard crashing as it does 99% of the time for the last 6 years.

I hope this doesn’t come across as a rant, it honestly isn’t. =P Just explaining the long ordeal one has to take in order to refine the look of the character and get it working with livelink.

I wish the devs would communicate more their intentions with the program. At least let us know if a more refined sculpting mode is coming, or if this is it. The staff were engaging on this forum for about a day and I haven’t seen them since which is a bit disheartening. Would be nice to have more insight into their future plans and also have our feedback at the very least be ackwowledged. (Or even the bugs, teeth still only export the default shape) Right now it seems that even though indies can use these tools, we aren’t really the target audience when it comes to hearing how it integrates with our pipeline.

This program has the potential to remove zBrush entirely from my pipeline when it comes to character sculpting. It just needs a few minor feature additions.

I think there is so much potential with the Metahumans tool, and thoroughly enjoy playing around with it. My only issue and biggest gripe however, is that the bodies feel tiny in comparison to the heads, and give a ‘bobble head’ effect due to the proportions. They are extremely bland in comparison to the faces, which outshine them by a significant amount when it comes to the art. Currently I can only imagine using Metahumans on a project, by swapping out the body for a custom one.

I would love to see in the future:

Eye shape was another severe limitation.

Surely, for Nose and Eyes this is just a starter. Eager to see more controls.

I wish more CLOTHES, shoes and others… and to have posibility to exclude shoes.
After all - tattoo / other misc. things

I vote for more control over nose types, I think noses right now are a bit wide and it is impossible to make them thinner. It would be great if one could select a type of nose, like greek, roman, arabic, etc. and it adjusted some topology automatically like presets.

I will like to add that they should have basic animations/playable character created upon import from bridge. At least for plebs like me that don’t want to know about the in’s and out’s of retargeting skeletons just to have a character walking in a 5 sec clip.

I would love an easy lipsync solution, not mocap just a way to take a wav file, generate visemes and apply them in Unreal engine, I am aware external programs like Nvidia Omniverse and iClone7 can do it but my computer cannot run the first and would struggle with the second if I could afford it.

The huge files are too big for my other lipsync options like Poser and Carrara and don’t make the round trip back keeping vertex order and skeleton.