FireEngine Game - at the request of my two year old!

I really love that we can finally make games that fulfil the imaginations of a kid! When I was young, and we had a C64 in the 80s, I remember asking my dad to make a game involving jet skis, waves and who knows what else. Well, that ended with some small blocks on the screen (Great for then, but still not quite what my imagination had anticipated).

Well, when my son asked me to make a game with a fire engine, burning buildings, and a firehose boom on top with water to put the fires out, this was the result. I’m only new to UE4, but I have a background in programming, so I’m really enjoying the C++. Blueprints are also great after I’ve got used to them

Your son should be proud of you!

In future, maybe his son will ask him to make a game and maybe he will start a thread like this (when i was young, my father made me a Fire Engine game…) in Unreal Engine 6 forums and maybe my son will respond to that and it continues again and again…lol…Circle of Unreal

My son would love this game. A big firetruck fanatic.

Where’d you get the assets from?

Assets are from the modular building set (purchase from Unreal Marketplace), and the firetruck is a license-free asset from the web (going to build a better one soon - those textures suck).

I’ve recently added a water particle system to shoot from the hose, and hit-intersection code in C++ to actually put the fires out. I’ll post a demo soon!

haha, I planned to do something similar for my 3-year-old son, but I’m afraid he would play with it too much because he is a fire engine fanatic:D 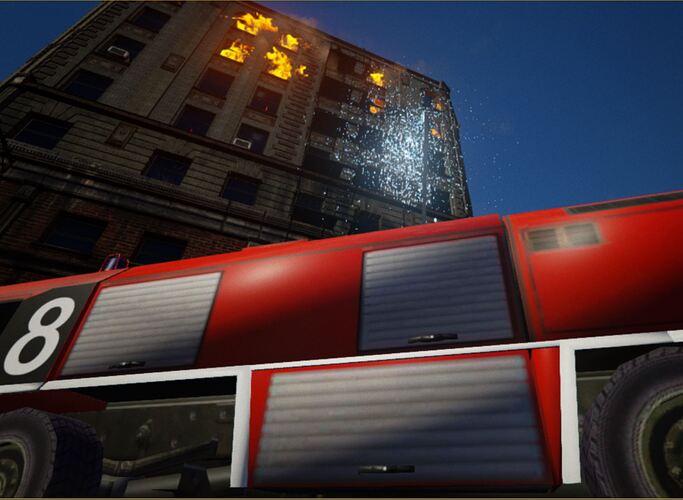 We need cute little Dalmations running around too

That’s awesome, I’m also making a game for my Son!

Your game is looking very nice so far.