I’m getting a error while cooking my map.
The Error pops up during cooking.
As soon as I dismiss the error, I get the cooker message that the map cooked successfully, however the “Upload” button is still grayed out.

Map was successfully cooked in prior dev kit versions, this is the first time I’ve tried cooking with the current version.

edit Solved partially. I found the problem. The cooker didn’t like the amount of extra landscapes I had in the map. (One along each edge of the main landscape and corners.)
Removing some of them fixed the problem.
The error reads:
**

Roraima_map.umap is the name of my main level for the map
The entire folder size for the whole Roraima folder is 1.23GB.

I’ve tried cooking after these changes, as well as reverting back to before the changes were made except the changes done to the NPCZoneManager entities (I can’t go back further then that unless I just change them back to their original number pre-update.) 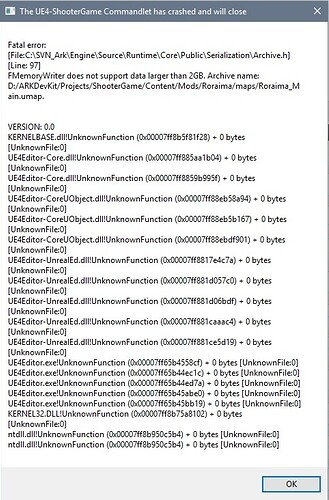