I think the biggest problem is getting Epic involved with the community. Although I see many Epic videos, it seems nothing has changed regarding the community support from UE3 days where Epic just left things to users to help themselves. I hope I’m wrong.

I think the biggest problem is getting Epic involved with the community.

I’m curious, is that actually any different with Unity?

Back when UE4 just came out Epic Devs would sometimes respond to threads. It felt already pretty rare back then but these days that never happens anymore (at least that I’m aware of). These days we get to see nothing but community managers (no offence). Maybe there should be some general Q&A streams as well every now and then so that all these off-topic questions from the regular streams also have a place to live in. Even with pull requests on GitHub or issues on the issue tracker it feels like you don’t really know what Epic thinks about them. One of my pull requests just celebrated two years of sitting around with no change or comment (and there still are no merge conflicts). I have no idea why it wasn’t accepted or merged yet, I can only guess that it’s super low priority.

Well, Unity has much more sub-forums and there is at least one community manager constantly answering questions and I often see direct involvement of the actual dev. Community managers are there to relay the messages to the dev and often invites the dev to answer. I can’t say they are doing adequate jobs to all forums but it’s more than we can ask them for.

One other problems with Epic forum is that, compare to Unity, it’s not granular enough. There are so many random topics in a single forum and it’s not easy to follow. Therefore I don’t really enjoy spending time in the forum. Epic should learn a thing or two from Unity. They are miles better in that regards. If Epic makes the forum a more enjoyable place to spend time, users will be a bit nicer to each other. I feel that Epic forum is bit more toxic than Unity’s overall.

It would be convenient to Activate/Deactivate multiple actors

Yes, I made some tweaks and now the button affects all selected actors.
Also I changed casting from UPrimitiveComponents to USceneComponents: 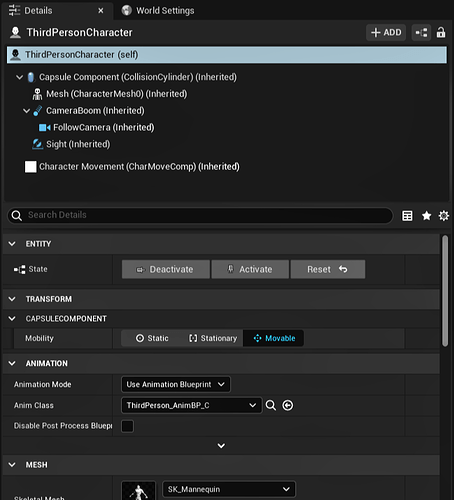 I’m curious, is that actually any different with Unity?

Considering they actually reply within a couple days to your requests on just about anything - from actual developers who more than likely do what you do instead of knowing next to nothing about programming or the engine like for the folks that are forced to deal with bugs in the few times they responded prior to the last year…
Let’s just say Yes. It’s a lot different, even if I don’t like that particular engine.

One other problems with Epic forum is that

It still exists after the last update.

There, I fixed your statement

@BrUnO_XaVIeR
Perhaps its not as easy to use/set up, but I usually spawn all the actors from place holders, so there’s a list the game goes down and only spawns what the list tells it to.
This was done to keep dead characters dead. but it expands nicely into disabling stuff for testing.

Thanks for the update again.
Yeah, Deactivate/Activate works perfectly.

FYI, multiple Actor Deactivate works but Multiple Actor Activate doesn’t work yet; it makes all actors visible again but they won’t move. I suppose it matters what kind of components we have and there could be many corner cases. ^^

There are 3 options: Activate, Deactivate and reset. What does reset do?