I made a post in the Archvis subforum about this but I figured this would be a good place to ask for it more directly.
( 'Min Lightmap Resolution': Any way to batch edit? - Architectural and Design Visualization - Unreal Engine Forums )

The ‘Min Lightmap Resolution’ in Static Mesh -> Build settings is incredibly useful for quickly generating usable UVs for lightmaps in-engine, and easily increasing the effective texture resolution of lightmaps. (Of course it’s possible to do so in external programs like Maya, but the tool in unreal is great, and it’s nice being able to adjust the asset without needing to reimport.)

For anyone confusing this with Lightmap Resolution in general, this is a separate thing entirely.
It’s packing the UV Shells of a generated lightmap to better utilize the UV space for a specific resolution, while respecting elements like padding to prevent leakage/spills while baking lighting.

Example: Standard 64x64 resolution on import, vs setting it to 256x256.
(Yes, it’s a bad model, but it shows the difference well due to it’s large amount of uv shells.) 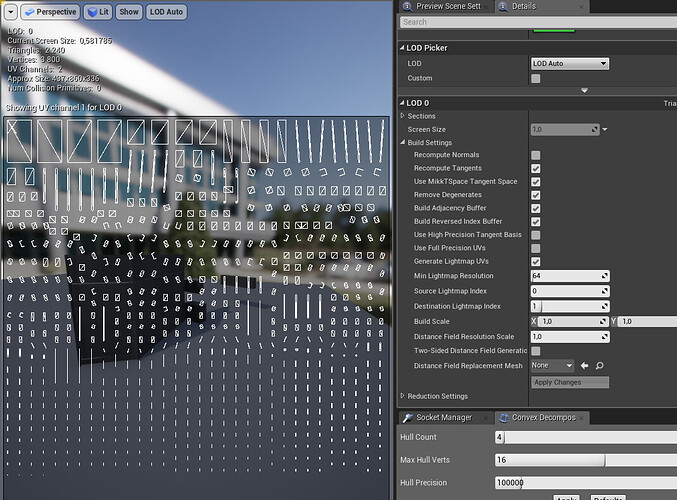 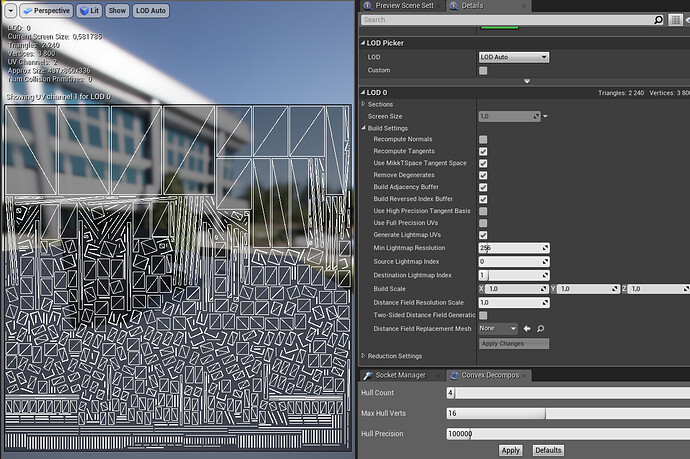 MinLightmassRes_2.PNG.jpg1211×806 289 KB
Uv space utilization is way higher, and you can get a better effective lightmap resolution with a lower resolution texture. This is great.

However, there are no options to set this on import.
And there is no way to bulk edit this option, you have to go into each static mesh separately and set the value and pack.
To make this even slower, the packing process can take up to multiple minutes, depending on the complexity of the mesh, and target resolution.
And while this process runs, unreal freezes and is unable to do anything.

So, my request is:
Would it be possible to make it so that this value can either be set + processed as part of the import process. Or better yet, exposed to the ‘bulk edit via property matrix’?
(And have them process in the background, so that it doesn’t lock up unreal while it optimizes them.)
Being able to set the ‘Min Lightmap Resolution’ for multiple meshes at once, and have them package in the background would speed up the workflow a lot for those of us who use it for scenes with baked lighting.

(Also maybe change it’s name, because now it’s nearly -always- mistaken for just the normal lightmap texture resolution, making it impossible to find discussion or info about it.
Maybe ‘Lightmap UV Pack target resolution’ or something to differentiate it. )

This would also be very useful for Unreal Studio customers, since it would make it easier to prep imported scenes for baked lighting, without needing to use excessively high lightmap sizes on meshes.

Any news on this one?
Would really appreciate to have a quick way to deal with this.
Doesn’t seam to work in editor utility blueprints either