I think you missed the point, Yes you can use Set Input Mode Game and UI but this still allows game input from the pawn/player controller, having to add a Boolean to stop this behavior isn’t logical, you should be able to set it to UI only and be able to turn a override on for the input actions you need to be usable in UI mode, just like how paused override works.

This really need to be addressed, setting the input mode to UI only disables blueprints input actions, i know you can override the key down function in UMG, but when you have over 30 widgets it becomes a mess having to do it in each one depending what ones in focus, and setting the input mode to Game and UI also creates issues, you find your self calling on a Boolean every time your UI is open to make sure your not calling logic that’s Game only, so being able to override a few keys for opening and closing UMG windows would really be helpful. 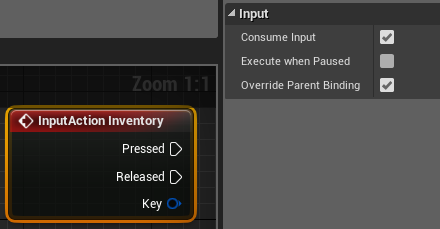 This is the intended behavior. You can use the “Set Input Mode Game and UI” to enable both, input for the UI and the game

Would be nice to get a answer to this thanks.

Can any Dev give some feedback on this can you please add this feature request ?

Can we get some input from a Dev please?

Because it would be easier to override it on the action key input its self, like you can when a game is paused, seeing most of the inputs are handled in bp and not UMG it seems backwards to me.

Thanks man :D, it would become a feature thats widely used.

If you want the widgets to override the same input in the same way, then why not create a base widget class with only your custom input logic and set that widget as the parent class for all of the other widgets so that they share the same input overrides.

Okay, I see what you mean, I thought you were referring to handling input on each widget. I agree this would make a useful feature. If I can get the time, I’d be more than happy to implement this feature.

Actually, upon looking further at this request, I started to wonder, what would be the benefit of adding a button to disable blueprint input while in UI and game mode? Wouldn’t this decrease flexibility for how different UI handles input and whether or not they want to disable game input? For example, if a dialog menu wants to override the d-pad but a quick select menu doesn’t, how would you determine which forms of input to disable? I believe that this isn’t a flaw, but a design decision to give the user the most control. In determining how the game handles input.

Not really, say you set the input mode to UI only this is great because it disables all blueprint inputs, setting it to Game and UI seems like a mess when you think of it, you mite have 20+ inputs you don’t want to work when your UI is open and then you mite have some you do? so you find your self calling a boolean to check if your UI is open or just using UI only but then you can’t use simple inputs that toggle your UMG widgets in blueprint any more? see what i mean.

You want the functionally so you can select a input and toggle it to override it or not, just like the execute on pause does.

If your using Game and UI mode then it wouldn’t really matter because the blueprint input is working, so it would only matter in UI mode only.

That’s true, but I think that a feature to allow you to manually enable/disable a specific input would be more a reboust and less restrictive way to implement this. This would allow you to control which inputs are disabled/enabled for each ui instead of adding a one-size-fits-all solution. For example, disabling d-pad input in a quick select menu, but allowing it in a dialog menu that uses the face buttons. All you would have to do to implement it would be to add the disable input node to the constructor or OnFocusRecieved event and the enable input node to the destructor or OnFocusLost event. It would also allow you to disable an input in certain in game situations, like disabling the ability to shoot while climbing or swimming.

I do see your point, then maybe it would be better if you could create your own Input modes rather than just having Game and UI, then you could select the input and select what channels it should work on.

So the point is I want to be able to set just UI mode then enable inputs keys to open say my inventory, these game inputs need to also work in UI mode, I don’t want UI and Game mode because then all the input work when it should be a simple tick box.

Can i get a epic stuff member to look at this or given me a answer to a better way of handling this issue?