I submitted FauxFur to the marketplace, unfortunately it was rejected.

I thought it had potential, e.g. short-furry/fuzzy looking things in stylized games.

It was a simple way of giving any surface a short-furry appearance (…but not long shaggy fur!).

It uses one material with multiples instances so has a low GPU footprint.

However, it is not meant to simulate dynamic hair (I’ll leave that kind of expertise to Ehamloptiran).

So yes, FauxFur has its limitations (i.e. no complex inter-follicular physics/gravity) but for something like a warriors bear-skin coat it looks ok.

Without the convenience of the UE-Marketplace (and support infrastructure therein) selling would involve setting up e.g. a Paypal merchant account and …ugh…
I don’t have time for that at the moment so unfortunately (for now) it is not on sale.

Shell-based fur is certainly not a new idea. In fact, I used this method in another engine many years ago.
I thought it would be interesting to see what it looks like in UE4.

I had a play with making the fur move vertically as a character’s centre of mass changed.
It looked ‘interesting’ but I abandoned the idea because it required passing the character pelvis world position from blueprint to
the material via MPC (with damping) and other tricks. It complicated an otherwise simple setup procedure and didn’t really add anything to the quality.

I have some other ideas about improving the fur quality, but not sure if it is worth the effort.
As the ‘faux’ implies — it’s just a furry appearance, and nowhere near the quality of complex GPU hair simulations.

This looks fantastic man! Sorry it didn’t get into the marketplace, I would have bought it!

I suspect a lot of people here would like a less-(performance)expensive fur option like this, though, marketplace or not. Thanks for sharing

Put it up on gumroad. I recently listed my blueprint template on there and it’s INCREDIBLY simple. Don’t need to set up paypal, they pay straight to your bank account once per week. The only struggle is exposing it then

Looks really cool. May I ask if they gave you a reason for it being rejected?

Also - any chance of a video of it in action?

The reason for rejection may be because you would be going up against: https://forums.unrealengine.com/showthread.php?62491-Neo-Fur-WIP-Fur-Solution which uses a similar method and is fully simulated. Thats just a guess, but thats the sort of quality level there is for fur rendering.

Thanks for the comments guys.

Also - any chance of a video of it in action?

Click on the ‘FauxFur’ link in my original post. Videos and downloadable demos are on that page:
http://3si.co.uk/fauxfur.html

May I ask if they gave you a reason for it being rejected?

They said because (quote):-

The reason for rejection may be because you would be going up against: https://forums.unrealengine.com/show…P-Fur-Solution which uses a similar method and is fully simulated. Thats just a guess, but thats the sort of quality level there is for fur rendering.

Very interesting! I’ve never seen that plugin before.
However, (afaik) plugins still aren’t sellable on the marketplace? so my material asset wouldn’t be competition.

I suspect the monthly improvements in the engine cause the ‘marketplace entry criteria bar’ to get higher and higher
and the curator has to make more critical decisions about what to accept.

These are the FauxFur material controls: 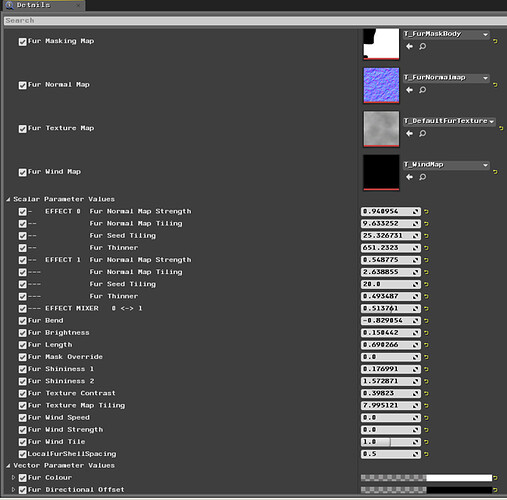 The ‘wind’ parameter was a complete accident (a serendipitous mis-wiring!) that I turned into a wind map
and created a ‘breezy fur’ effect.

Just watched the video - that looks awesome man. That is an excellent solution for indie devs who don’t have the money/ability to make ‘real hair’ work in their games without crippling performance. I totally put my vote in for you to chuck it up on gumroad.com! I would but this in an instant, if I had the money (which I mostly don’t - but WHEN I DO!!!).

Awesome work man, I was just going to ask if you could hook up the simple wind to it, but you beat me to the punch

Can’t wait to set this up.

I took a peek at Gumroad as recommended by apoisonedgift.
I thought it would be a pain like every other ecommerce solution but it does indeed look hassle free.

I will investigate further.

FauxFur is now available on Gumroad: FauxFur for Unreal Engine 4

because its a simple thing which doesn’t take alot of performance i purchased it, thanks man and continue the great work.

how do you apply the material to the character tho? it makes my character completely transparent??

because its a simple thing which doesn’t take alot of performance i purchased it, thanks man and continue the great work.

You’re welcome, and thanks.

how do you apply the material to the character tho? it makes my character completely transparent??

If you did and still have an issue then let me know and I’ll help.

don’t worry all is figured

I’ll subscribe this thread to bookmark this wonderful product

This reminds me to wonderful things as
Vivisector: Beast Within

i like the fur very much considering its for my project that lready uses alot of features that skiw down even a gaming pc alot, so with this fur asset/material it really doesnt slow it down at all especially compared to that ****** nvidia hair works, good job and thank you.

I suspect the monthly improvements in the engine cause the ‘marketplace entry criteria bar’ to get higher and higher
and the curator has to make more critical decisions about what to accept.

Do not worry. There is not entry bar. I bought really a lot of assets from there by now and in the end replaced almost everything by other assets from other sources. What they offer is at best BBB quality, with many flaws and bugs, done by some people at home in their free time. The marketplace guys also seem to be without proper 3D/Games background looking at what they waive through and what they reject. I have bought stuff from there that was really low quality.

Thanks for the support guys!

Non photo-realistic ‘stylized’ games and assets (look at mixamo characters!) are quite popular and those are the kind of games FauxFur is suited to, especially on mobile devices that can’t handle heavier hair solutions.

FauxFur simply offers an alternative/inexpensive solution that some find suitable for their chartacters without incurring a heavy FPS penalty.