Fantastical Minim / Announcement
Hello again everybody and in this post i want to share with you a new version of my Beat Em Up Platformer that im working on that is planned to be available for everyone called Fantastical Minim.

So what is Fantastical Minim? Well it is a new version of Fantastical that will be made available for Windows 10 and possibly the Xbox Series console… i say possibly because who really has a Xbox Series these days? 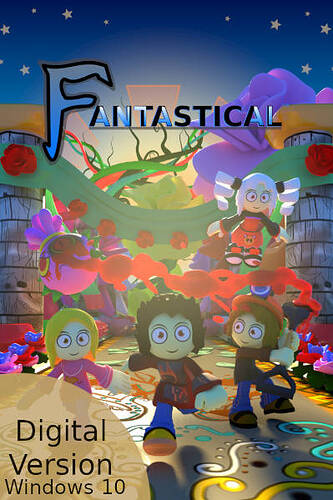 Fantastical Minim “CANCELLED”
Free. YES
Game Type: Partial Game / Half for free
Update Content: NO Minim does not have free content updates.
*If Upgraded to full version your saves will carry over to Allegro Version.

UPDATE TO FANTASTICAL MINIM
This new version of Fantastical will never see the light of day due to many reasons and one of them
is simply because im no longer interested in continuing its development but bug fixes and stuff are
still a thing.

Since a new project is in the works and Fantastical is the last game i make to use Unreal Engine 4
and since im no longer interested in unreal no further UE4/5 content is planned.

New Game in Development based of the Fantastical game.

This new game that is based of the Fantastical game universe is being developed the game is currently in a state of experimentation to see if the game should continue using UE4 or another engine.

This game you play as “ED” and a new adventure awaits you!! this is however nothing like Fantastical in terms of gameplay the game is planned to be much different and new mechanics are in place i will share more about this in time.

Why would the game no longer use UE4?
Because of Vulkan and various other issues with the engine in none Windows platforms for example if a game that i make is capable of running on a 2GB VRAM GPU then the engine better be able to pull it of without issue and/or as close to DX11 performance, this is technically a issue thats been around for years with UE4 and to this day it is still a problem since GNU or “LINUX” is planned to be a new adopted platform to play this new game UE4 must be capable to meet the games demand on that platform.

Does the game need more higher specs?
Based of the extensive tests and stress tests the answer seems that a 2GB GPU is still a possibility and i am always in favor for supporting lower end GPUS the more the better, but UE4 is not of course i am looking for some ways to address this.

Is this issue part of the reason Fantastical did not get a GNU version?
Yes pretty much. UE4 favors Windows more and it shows.

Would Fantastical be ported to GNU in the future?
No i dont think so the game is pretty much concluded at this point i just want to move on to new projects the final update was released like long ago.

Looks like GNU “Linux” / BSD and Windows 10… but what about Console and the new Windows 11?

So basically i wont use it and also because my hardware wont qualify to run the bloody thing
i skipped the details about the OS and really i wont bother i just wont.

Windows 10 is the last Windows i switched to GNU successfully.

More to come about Project Concerto later on.

This is a unique game and it is also a introduction to the GNU OS “Linux” which is the new development standard with me this means that Windows is officially in the back now and is no longer in first place when making decisions for game development this is now the position of the “UNIX LIKE OS’s”.

Plaforms is a big deal here sure the Windows version will be there but the GNU versions are the new top priority this includes also the Berkleys “BSD”.

Alright so after a good few days the game has been in a state of prototyping for the GNU OS
and so far things look good but now comes the truly hairy part and that is to put the game in
UE4 and continue comparing it with the current engine “CSM” which is a more In House-ish engine
being used in case UE4 simply cant deliver the Vulkan performance and the VRAM issues that are far to prominent in that engine.

We all know UE4 which does not need much of a introduction but CSM is different… CSM is a engine which is currently running on OpenGL but plans to push on to Vulkan later the engine in comparison to UE4 is actually much harder to develop with and it takes alot of effort to get the type of graphics i want on that engine, UE4 uses Vulkan because well OpenGL is no longer a option in there and really they should had kept it in the engine but it wasnt.

60 FPS is king on all my games and it is a target every game i make needs… the game runs 60 FPS fine but too much work required with CSM but with UE4 it has a much higher performance gain.

The next new step is to check out the game on UE4.

More to come about this new project.

Project Concerto is coming soon for GNU, Windows 10 and the BSD Operating Systems.

You could just use ue4/5 forward rendering and keep an eye on your texture pool, that tends to take care of most issues on weaker devices. In house engines have worked in the past, but spelled doom for many smaller projects.

Doubt it this problem has existed for years