Face Pawn to Direction of Movement

I am controlling a pawn’s movement
with the mouse (it will be touch).

Could briefly show / explain how the movement is implemented in the Pawn, and its hierarchy?

If you have an object that is physically simulated, overriding its rotation will result in pure chaos. If you’re moving the rake using physics (add force?), you should use a method that applies rotational forces to a physics object a.k.a. torque.

Again, how to rotate things depends heavily on how they’re being pushed around.

I am controlling a pawn’s movement with the mouse (it will be touch). I would like the pawn to face the direction of movement. I think I’m getting close. When I have the node set to Print String I get lovely Yaw numbers: - YouTube. As soon as I connect to the SetActorRotation node, it starts to flutter wildly: - YouTube. Yikes!!! What am I missing?

Here are my nodes:

It looks as though periods got picked up in my links and broke them.
Lovely yaw numbers: - YouTube
Wild fluttering: - YouTube

I am moving the object from my level blueprint with Get Hit Result Under Cursor by Channel. I made a few functions for Event Tick, Left Mouse Press and Left Mouse Release. And then applied them to their respective events. I have simulate physics turned off in my pawn’s static mesh. 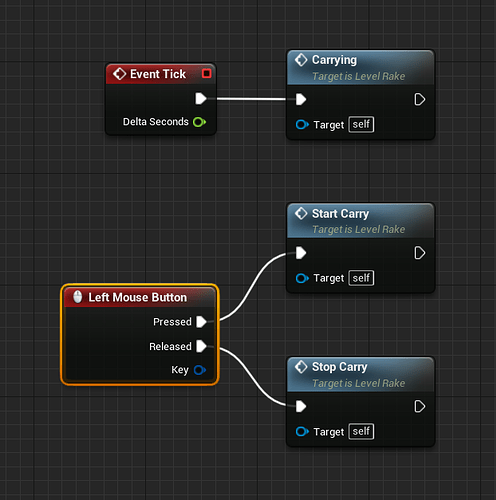 Makes sense. Not 100% sure but it I believe the physics linear velocity will not do well here as it’s being recalculated every frame.

Essentially, as you carry the rake, you capture the location of where the mouse cursor is and rotate it towards that coordinate.

Thank you for your time on this! That didn’t work for me because, I believe, the actor location is tied to the screen coordinates. So, the cursor rotates based on it’s proximity to the center of the screen and not the direction of movement. At least that what I was observing. Instead, I found that using the mouse delta was the key. I hit on another solution seems to be working. I’m getting a little jitter that I’d like to smooth out, but overall it’s working well. I don’t really know what I’m doing. This is more trial and error.