My indie horror game, Foglight, just came out on Steam!!!

What is Foglight? Foglight is a survival horror game set on an open world Island where the player has to find a way to either fight or escape. The game has a run time set around 2-3 hours, with several endings (3).

Some background on the development of the game:

My original inspiration came from Mr.X in Resident Evil. I really liked the idea of this enemy that can go anywhere the player goes and this tension that builds in the Police Station. So in my game, I expanded on that by having an enemy that really “hunts” the player, and brought him outside in the woods. I tested the game on some friends and I got some good reactions! THE LEGEND OF FARBERTO
(Lore)

An urban legend native to a small island off the east coast of Virginia, called Broy Island, *Farberto *is supposedly close to 500 years old, perhaps older, as sightings of Farberto go back to the 1700s. Farberto is described as a Bear with the spine of a man, large claws and grey eyes that glow in fog.

The eyes of Farberto are reported to glow in the dark, and shine off fog. This has led to a saying by island locals, to “Beware the Foglights.” Nearly Blind, Farberto is said to have excellent smell. Once he decides to track his prey, he will never stop. Farberto is believed to go into hibernation for long stretch’s of time. These stretches are based on the amount of food, bodies, he is able to store. If he has a bad harvest of human meat, basically if the island is not visited by anyone, he can go into absurdly long hibernations while he waits for food to arrive. This data is backed by population trends on the Island and also contributes to the difficulty authorities have had in proving Farbertos existence. Broy Island is believed to be honeycombed with a deep cave network that was used by bootleggers in the 20th century, and has not been fully mapped. Farberto is believed to have made his Den in these catacombs… 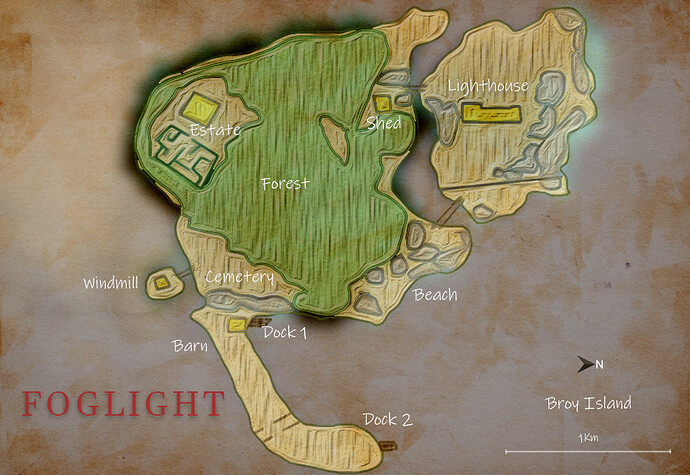